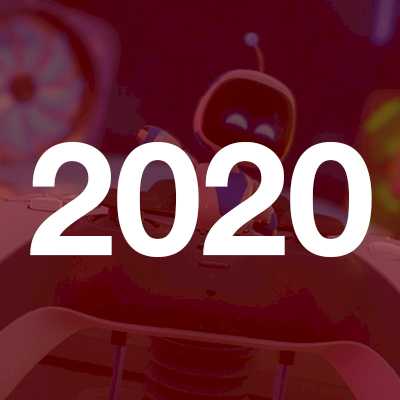 Exploring our favourite video games from the year 2020

This blog series is all about the best games of the last 20 years. George and Matt from the Monitor Audio team take a look at each year and pick their favourites. In this final post, we’ll be looking at the year 2020.

The year that we all stayed home gave the gaming industry a huge boost, with the swan-songs of the current generation and the release of the PlayStation 5 and Xbox Series X. 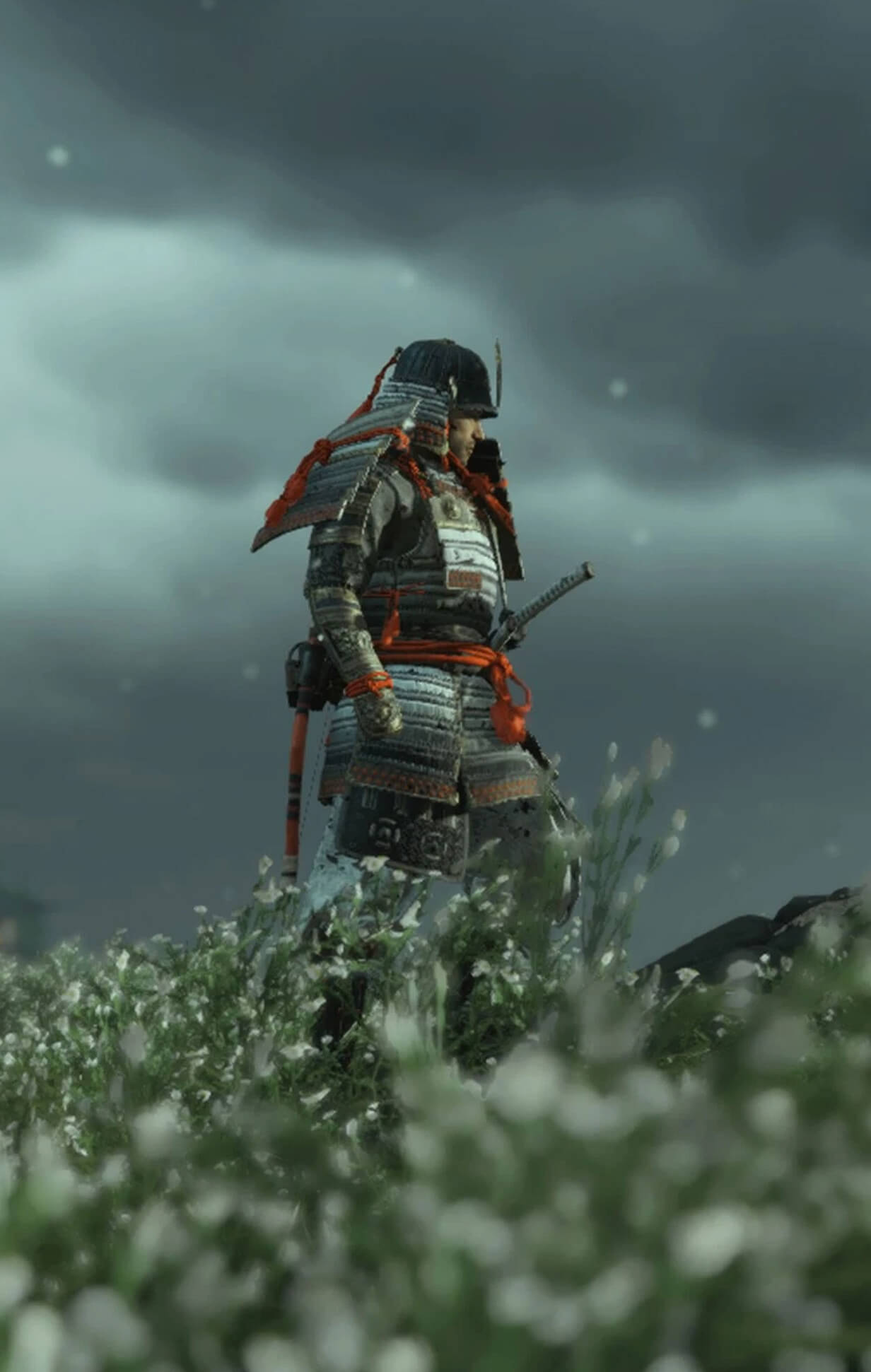 On the Japanese island of Tsushima, Lord Shimura leads Sakai forces to repel an invasion by a Mongolian fleet. You play as samurai Jin Sakai, head of Sakai clan and nephew of Shimura. As their army is decimated, Khan, leader of the Mongols, captures Shimura, as a local named Yuna tends to Jin’s wounds. Despite his condition, Jin makes his way to Castle Kaneda, where is uncle is being held, but is no match for Khotun Khan.

As you navigate your way across the island, you meet other clans, who agree to help, whilst Jin adopts a new fighting style. Alongside Yuna and brother Taka, Jin begins to disrupt various Mongol operations, liberating towns, as he operates as one of the last remaining samurai’s. Despite initially being taught to fight enemies’ head on, Jin uses a new stealthy approach. Merchant Kenji, archer Ishikawa, samurai Masako Adachi, and his old friend Ryuzo also agree to help, having helped each one with their own problems. As Jin becomes well known across the island, he is referred to as "The Ghost". During the rescue mission with his new allies at Kaneda Castle, Ryuzo betrays Jin, but the castle is retaken and Lord Shimura is saved. Kahn moves on to Shimura Castle, as the Yarikawa clan agree to help Jin retake it. Lord Shimura calls for help from the Shogun, the leaders of the samurai class. Despite wanting to adopt Jin, following his fathers passing, Lord Shimura is unhappy with Jin’s idea of poisoning Khan’s troops. During the assault on the castle, the Shoguns reinforcements are killed, leading Jin to use the poison.

After killing Ryuzo, the Shogun arrest Jin, but after his escape, he finally defeats Khotun. Despite now being on the run, a showdown with Lord Shimura follows, as a choice is made to either kill or spare his life.

Alongside the beautiful landscape, of which photo mode is a must, there is an overwhelming amount of things to do in Tsushima. With multiple story arc’s, each interesting character is put to good use, as they are all heavily involved. Ghost of Tsushima is an extraordinary game and luckily for us, we will most likely have a sequel on the next-gen PS5.

Set five years after the events in The Last of Us, developers Naughty Dog reintroduced us to their grim post-apocalyptic world.

In a flashback, Tommy learns that the cure for the Cordyceps pandemic would have been possible, had his brother Joel not saved Ellie. Four years later, you initially continue to play as Ellie, now living as part of a new community. Joel and Ellie are no longer close, after Ellie found out that she was the cure, but Joel saved her. Things take a sudden turn, when we are introduced to Abby, who you also play as.

Abby is part of a group called the WLF. As an infected horde chases her close to Ellie’s camp, whilst on patrol, Joel and Tommy save her, but her motive is clear, as Joel is killed. Five years prior, the surgeon Joel murdered, at the Fireflies hospital, operating on Ellie, was Abby’s father. Upon witnessing Joel’s murder, Ellie seeks revenge. After Tommy goes ahead to find Abby, Ellie and her girlfriend Dina follow. When Dina becomes ill, she reveals she is pregnant, as Ellie reveals she is immune. Dina's ex-boyfriend Jesse joins them, as they learn the WLF are battling the Seraphites cult. Ellie regretfully kills two members of Abby’s crew, Mel and her boyfriend Owen, once Abby’s ex, not realising that Mel was heavily pregnant. As Dina is left to rest, Abby kills Jesse and takes Tommy hostage. Day’s prior, we follow Abby’s journey, as Seraphite siblings, Yara and Lev, who have been cast out by their group, rescue Abby. Whilst Yara is suffering a broken arm, which becomes infected, Abby agrees to fight against the WLF to help Lev retrieve medical supplies. When Owen amputates Yara's arm, they go in pursuit of Lev, with Yara sacrificing herself to the WLF to save them both. Upon finding Owen dead, Abby reaches Ellie and Dina, but Lev convinces her to spare them.

Many months later, Tommy provides Ellie with Abby’s location and despite Dina’s pleas; she reaches Abby and Lev, but instead saves them from a bandit gang. After a final showdown, Ellie and Abby part ways.

Whilst not straying from its core elements, Naughty Dog made a vast improvement on its predecessor, providing us with an emotional journey. Alongside its haunting score, the brutal story continued and managed to pull us in both directions, begging the question, is Ellie or Abby the true antagonist in this story? TLOU2 is a true masterpiece. 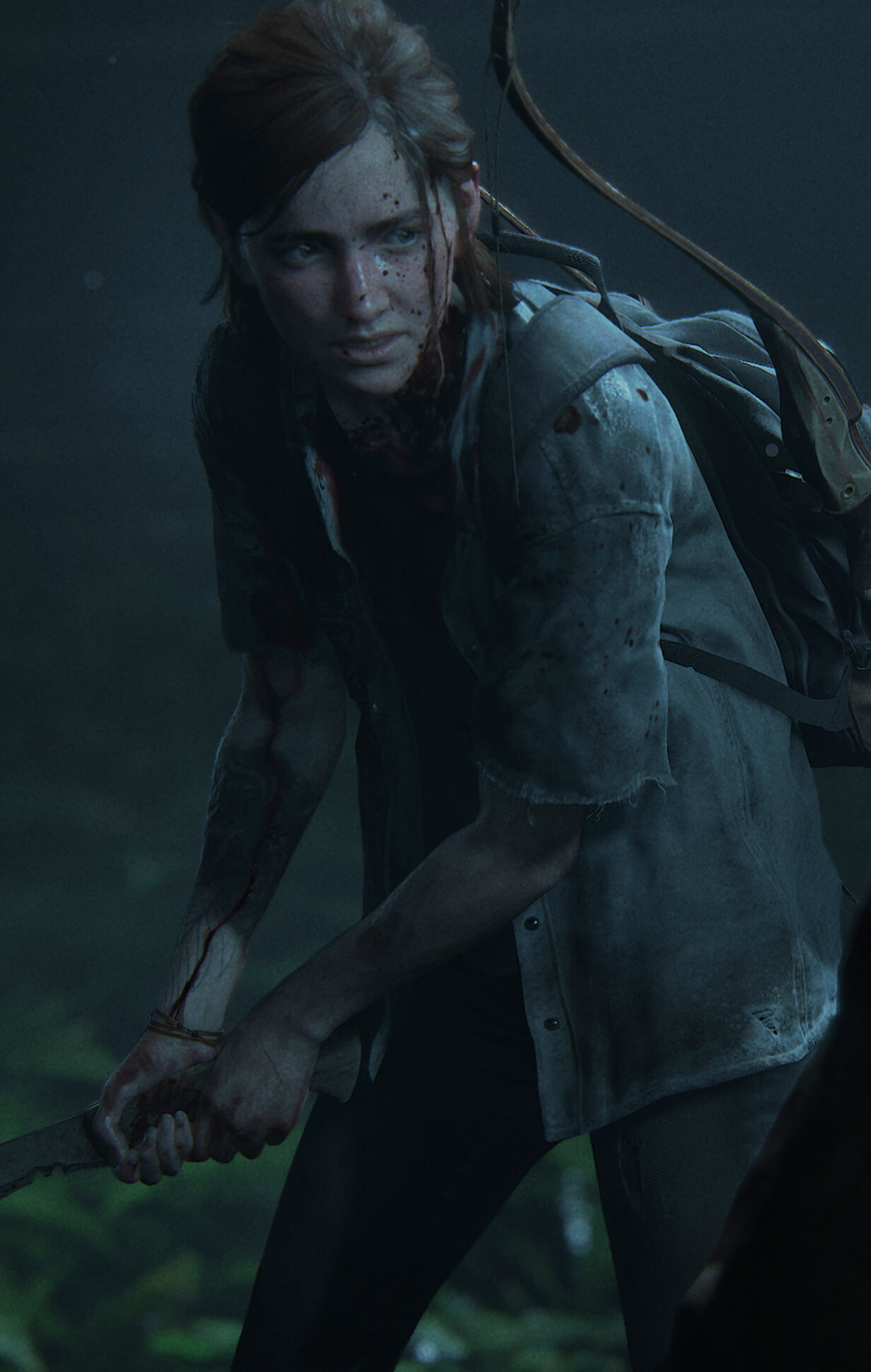 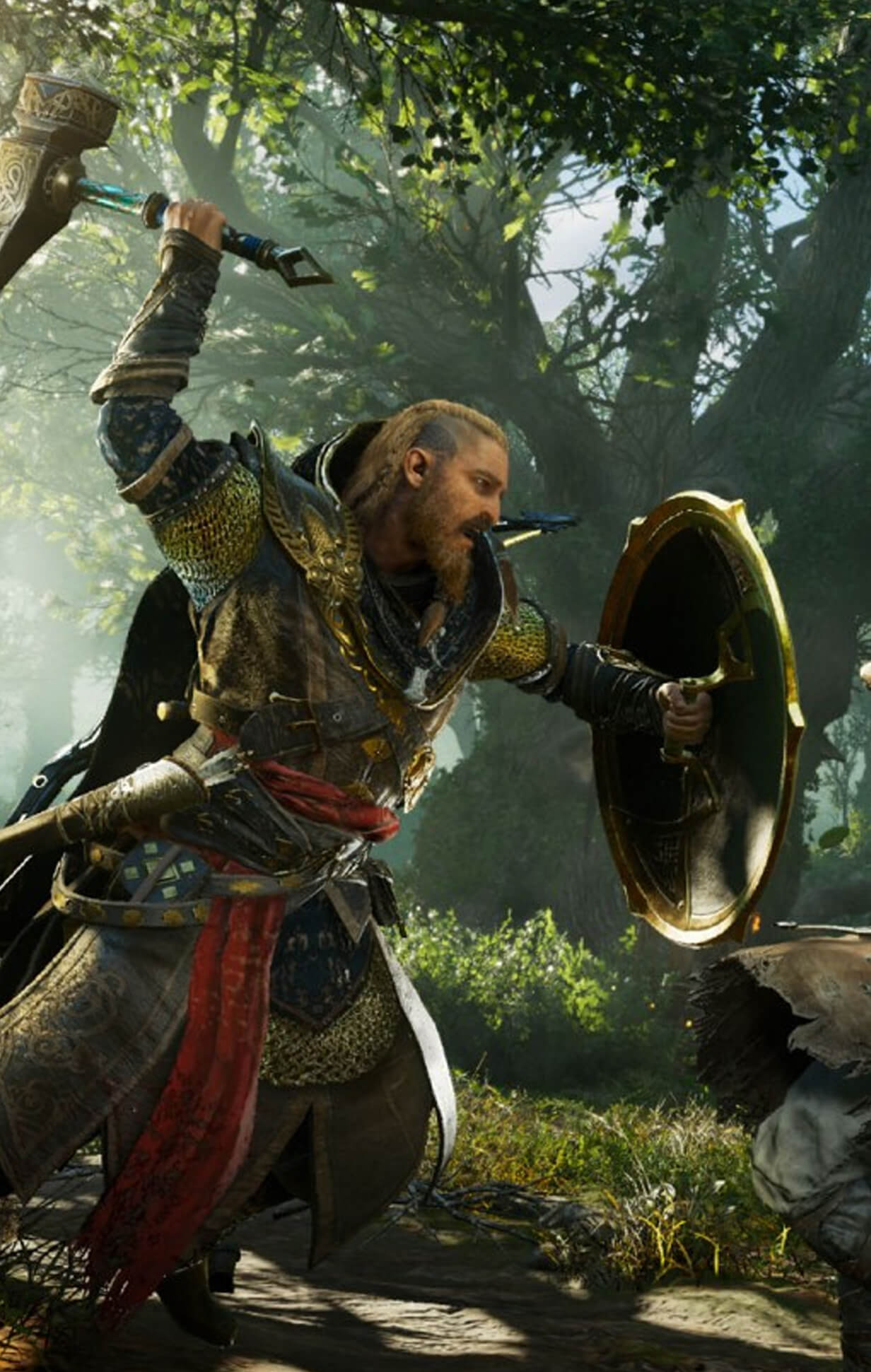 The newest instalment from Ubisoft continued the Assassins and Templar Order story, this time set during the Viking invasion of Britain.

Set in AD 873, you continue as Brotherhood member Layla, who re-enters the Animus to view memories of Eivor, after a signal leads them to the remains of a Viking raider in New England. As the Earth's magnetic field strengthens, the group use Eivor to look for the source.

Set in a village in Norway, we are introduced to a young Eivor, who witnesses warlord Kjotve kill his father. After King Styrbjorn adopts him, Eivor spends the following years chasing Kjotve down. Upon recovering his father’s axe, Eivor has visions of the Norse God Odin, who guides him. When his adoptive brother, Sigurd, returns to the village with Basim and Hytham, members of the Hidden Ones, they lead an assault, as Eivor kills Kjotve. Hytham reveals that Kjotve was part of the Order of the Ancients, who oppose the ideologies set by the Hidden Ones, over the future of humanity. After their victory, Eivor and Sigurd set out for Anglo-Saxon England, to settle with their clan. In their new home of Ravensthorpe, Eivor is tasked with uniting Viking clans and Saxon kingdoms, in order to build their reputation and forge bonds. As well as a journey to Vinland, whilst creating alliances across England, Eivor aims to defeat the remaining Order of the Ancients members. Starting with the brutal Zealots, fierce battles follow with the top Wardens. Eivor briefly transports into the body of Odin to visit Asgard, as we meet the Isu, a humanoid race who created the pieces of Eden. Upon his return, Sigurd is taken hostage but when saved, Sigurd, believing he is an Isu, travels to Norway to find Valhalla, which turns out to be a dream world.

Eivor realises he is a reincarnation of Odin, and Sigurd of Tyr, as a battle with the Grand Master follows. Layla and her team use Eivor’s memories to help stabilise the magnetic field, as Basim, the reincarnation of Loki, helps them and is finally released from the simulation.

Whilst Ubisoft kept the general formula, with abilities and skills helping you to progress and fight tougher enemies, there are many more choices and far more to do in this wonderful open world. Despite many of their previous entries feeling like they were just a re-skin, Valhalla feels a lot more dynamic and despite some bugs, is easily the best entry since Assassin's Creed 2.

Though it’s not quite the follow up to Insomniac Games’ 2018 Marvel’s Spider-Man that we expected, this new story in the Spider-Man world features incredible graphics, soundtrack and action sequences.

Following on from the events in the first game, Miles Morales is now being mentored by Peter Parker, continuing to keep New York safe, with two Spider-Men. After stopping villain Rhino escaping police and leaving him in custody of Roxxon R&D director Simon Krieger, Peter entrusts Miles to keep New York safe over the Christmas season, as Peter helps his girlfriend Mary Jane with an assignment abroad.

After celebrating Christmas with his mother Rio, and best friends Ganke and Phin, the next day Miles attends one of his mother’s campaign rallies to become governor of Harlem. However, it’s interrupted by a high-tech terrorist group called the Underground, who have a vendetta against Roxxon, whose headquarters are in the area. During the conflict, Miles discovers their leader known as the ‘Tinkerer’ is actually his friend Phin, avenging her brother’s death from radiation poisoning, whilst working on a new power source Nuform at Roxxon. Phin plans to destroy the Nuform reactor at the Roxxon Plaza to show the destructive effects of the technology, however Miles knows this will also destroy most of Harlem, killing thousands of innocent people. After trying to infiltrate the Underground, Miles reveals his Spider-Man identity to Phin and the two drift apart. In an attempt to reconcile, Miles and Phin are captured by Roxxon, which further galvanises Phin’s plans to destroy Roxxon Plaza. Miles confronts and defeats Phin as the reactor goes critical, using his bio-electricity powers, he attempts to absorb the energy. Seeing that the energy will kill Miles if not released, a remorseful Phin flies him to a safe distance above the city to release the energy, sacrificing herself in the process.

Four weeks later, Roxxon is dealing with numerous lawsuits, whilst Kreiger is arrested. Peter returns from his trip and praises Miles for his growth and heroism before they head off to fight crime together.

This fantastic expansion gives us a whole new perspective of the Spider-Man world, with brilliant storytelling, performances and music. 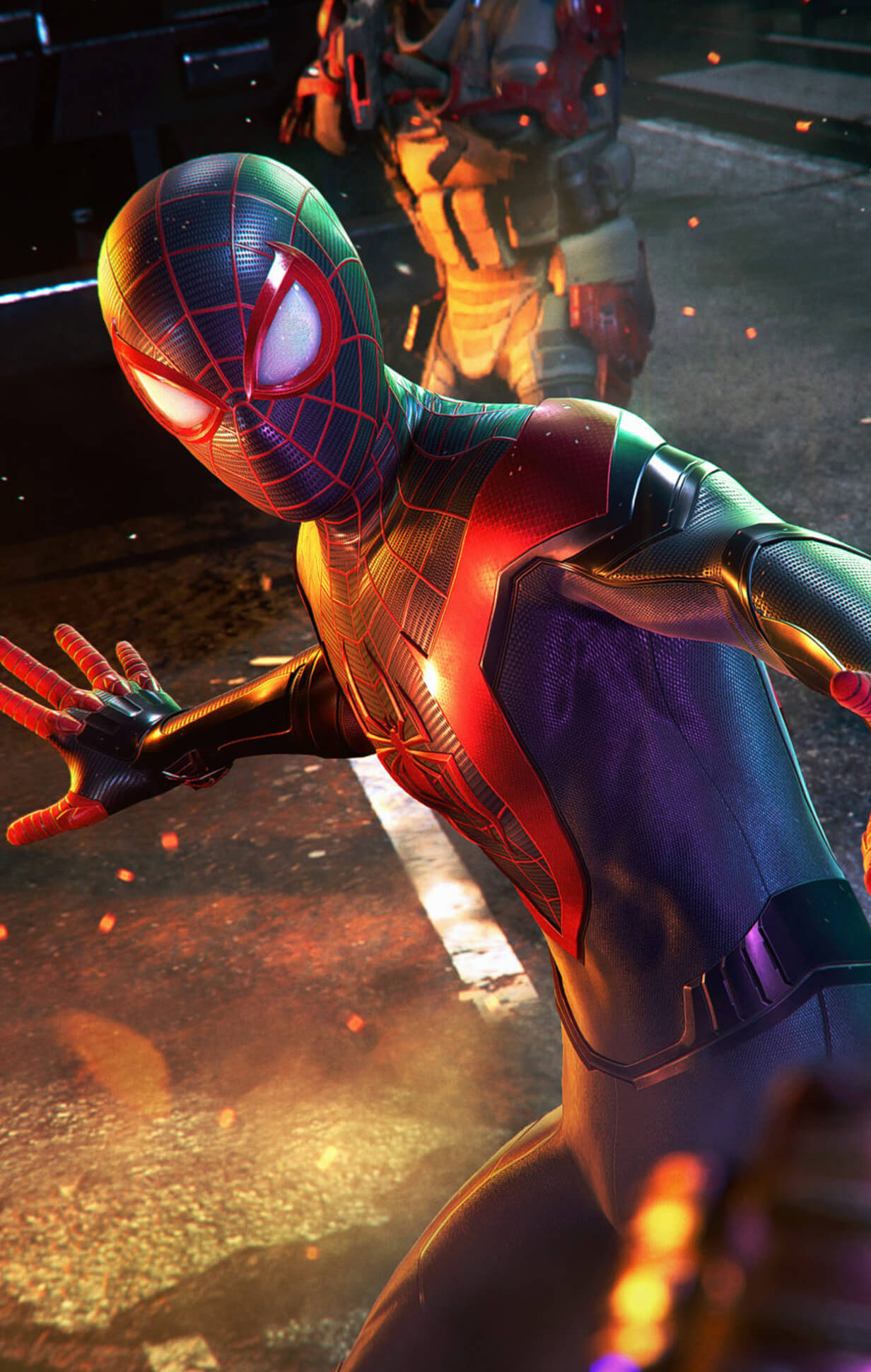 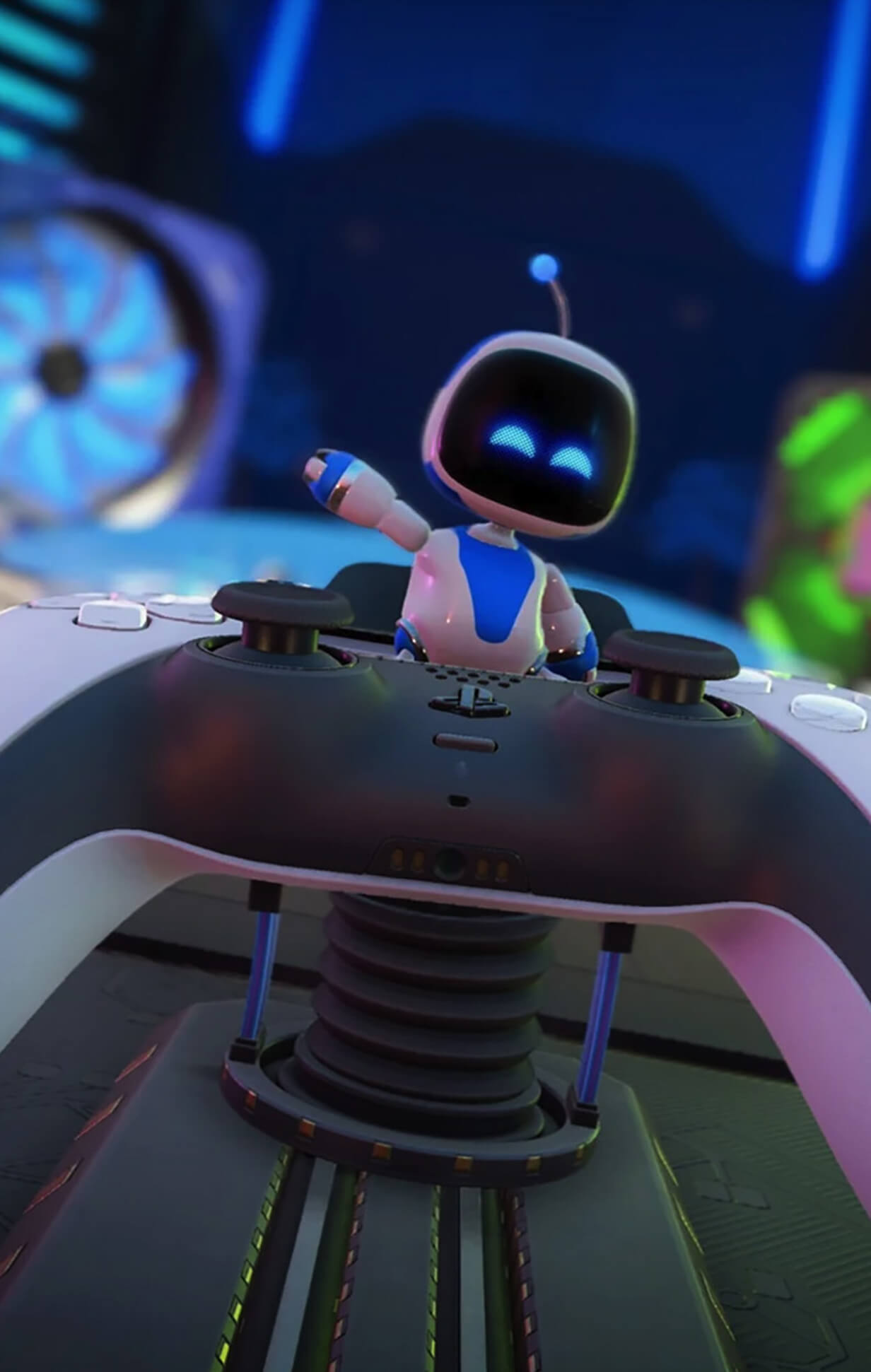 It may not be the highest budget blockbuster, but Japan Studio Asobi Team’s Astro’s Playroom brought so much joy to depressing year.

Pre-installed on every PlayStation 5 console, Astro’s Playroom becomes the first game every PS5 owner will play as they wait for their other games to install, acting as a technical demo for the new DualSense controller.

You play as Astro, a little robot that lives inside the PlayStation 5. Starting in CPU plaza, Astro can explore four distinct worlds, GPU Jungle, Cooling Springs, SSD Speedway and Memory Meadow. Throughout the different areas, players experience different haptic feedback from the controller as Astro walks across different materials, experiencing a rain storm and the wind.

Littered throughout the world are sets of other robots acting out scenes from game franchises iconic with the PlayStation brand such as God of War, Resident Evil and Crash Bandicoot. Along the way you’ll also find ‘artefacts’ from PlayStation’s past including the previous consoles and accessories, even obscure ones, which build a collection for you to explore in the PlayStation Labo area.

Kids these days might not understand the references in Astro’s Playroom, but for someone who grew up with the PlayStation brand it will take you through a trip down memory lane. Along with being an incredible platformer, the games visuals are stunning and the catchy music will have you humming all day.