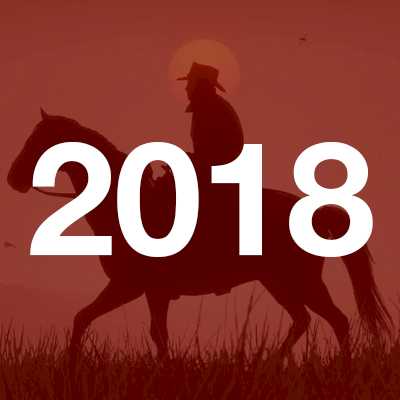 Exploring our favourite video games from the year 2018

This blog series is all about the best games of the last 20 years. George and Matt from the Monitor Audio team take a look at each year and pick their favourites. In this post, we’ll be going back to the year 2018.

In a stellar year for video games, 2018 gave us some of the best games of the generation, including wild-west adventure Red Dead Redemption 2 and arguable the best superhero game ever in Spider-Man. 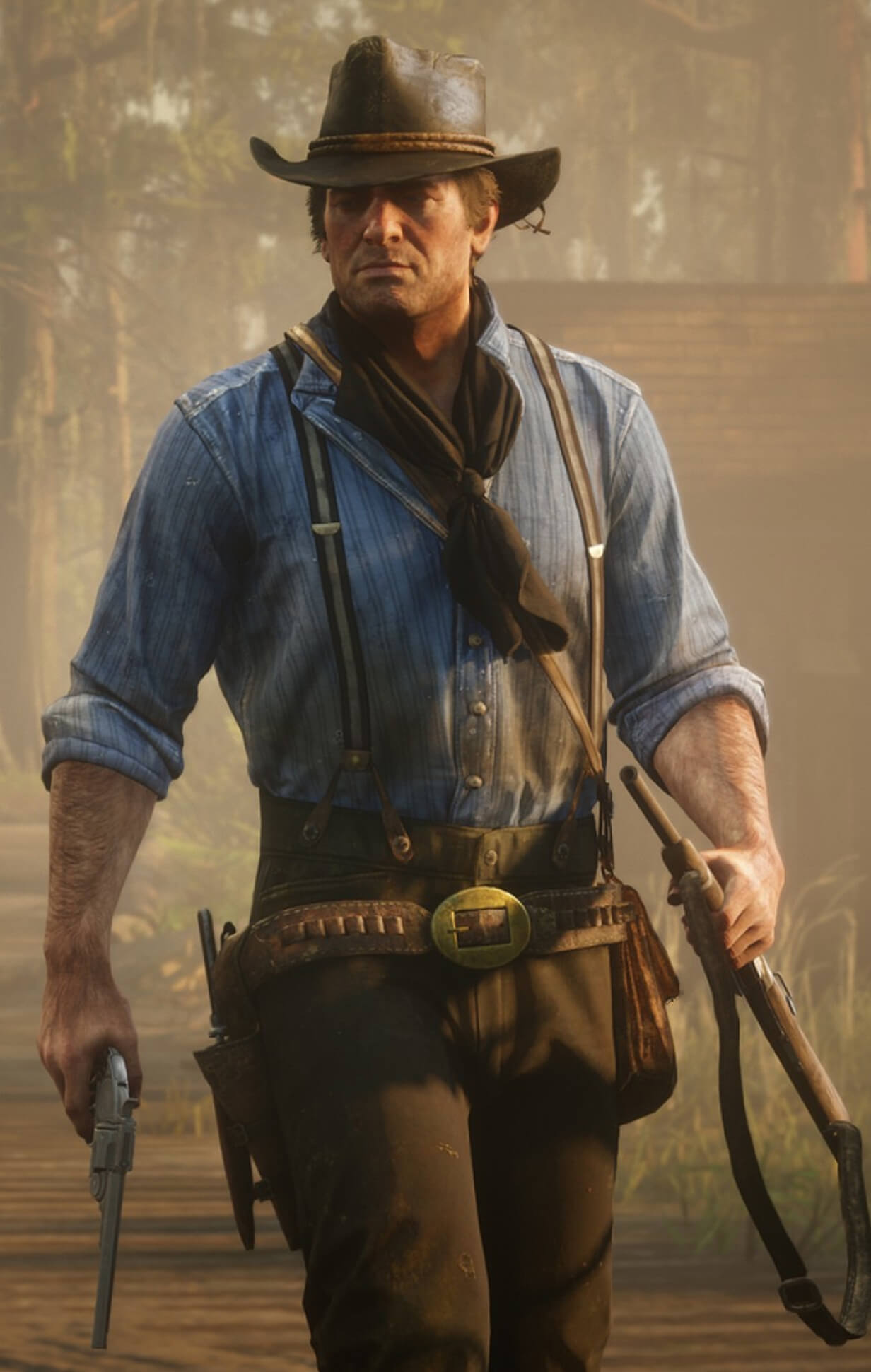 Rockstar | PlayStation 4, Xbox One and PC

In 1899, years after the end of the Civil War, with more people moving to larger cities, the time of outlaws was coming to an end. We are reintroduced to the Van der Linde gang, struggling to survive, after a heist in the town of Blackwater forces them to abandon their stash. The gang decide to gain just enough money to retire, whilst they still can.

Playing as Arthur, a member of the gang, oil magnate Leviticus Cornwall becomes their target, as they rob his train. Cornwall hires Milton and Ross from the Pinkerton Detective Agency to hunt them down. The gang, led by the delusional Dutch, find themselves working in Lemoyne. After turning the Grays and Braithwaites against each other, the families are both eliminated. After a botched bank job, Arthur, along with Dutch, Bill, Javier, and Micah escape, but find themselves on the island of Guarma, after their ship sinks. After helping rid the island of a tyrannical plantation owner, they reunite with their gang. When Dutch murders Cornwall, things take a turn for Arthur, after being diagnosed with tuberculosis. He persuades John to run away with Abigail and Jack as Dutch begins to believe there is an informant within the gang. After a final bank robbery, it is revealed that Micah is the informer, but as he faces off with Arthur, Dutch abandons them both. With the disease attacking his body and severely injured from a shootout with him, Arthur succumbs, as Micah escapes.

In 1907, you play as John, working on a ranch to purchase a small home, fit for Abigail and Jack. Upon learning of Micah’s location, Dutch arrives first and kills him. After retrieving the gang's Blackwater stash, John settles down with his family, as Ross observes his ranch from a distance.

As you explore and immerse yourself in the American wilderness, it truly feels like you are part of Butch Cassidy's Wild Bunch, as you rob and steal to survive. In this landmark game, Rockstar gives us everything. The graphics, storytelling, audio and gameplay cements Red Dead Redemption 2 as the best game I have ever played.

Developer Insomniac Games brought us a spectacular adventure, as you swing, leap and lunge across Manhattan’s rooftops as Spider-Man.

Years after being bitten by a genetically modified spider and gaining powers, Spider-Man has become an experienced crime fighter. After super villain Wilson Fisk, Kingpin of crime is captured; a supernaturally powered gang called the Inner Demons plan to obtain the Devil's Breath. The Devil's Breath is a virus, initially created by Oscorp, to develop a cure for genetic diseases. They intend to turn it into a bioweapon.

After defeating another enemy called Shocker, Martin Li, the founder and owner of a homeless shelter, transforms into Mister Negative, the ruthless leader of the Inner Demons. After stealing the only sample of Devil's Breath, Li threatens to release it unless Mayor Osborn surrenders to him. After securing the sample, Spider-Man defeats Li and sends him to a maximum-security prison. Despite initially using them to handle hazardous materials, Dr. Otto Octavius AI powered robotic arms take over as he turns into Doctor Octopus, and plans to get hold of the sample. After Li, alongside Electro, Vulture, Rhino, and Scorpion escape prison; they subdue Spider-Man, allowing Doctor Octopus to release the virus, as New York descends into chaos. Osborn brands Spider-Man a fugitive, believing he is to blame. As Spider-Man defeats Li and his crew, an Oscorp genetically modified spider bites friend Miles. After rescuing Osborn, Spider-Man recovers the antidote and defeats Octavius.

Months later, after the vaccine is introduced and the city is rid of the virus, Miles reveals his powers to Peter, who reciprocates. A secret laboratory, holding Norman Osborn’s terminally ill son Harry, reveals a black, web-like substance. 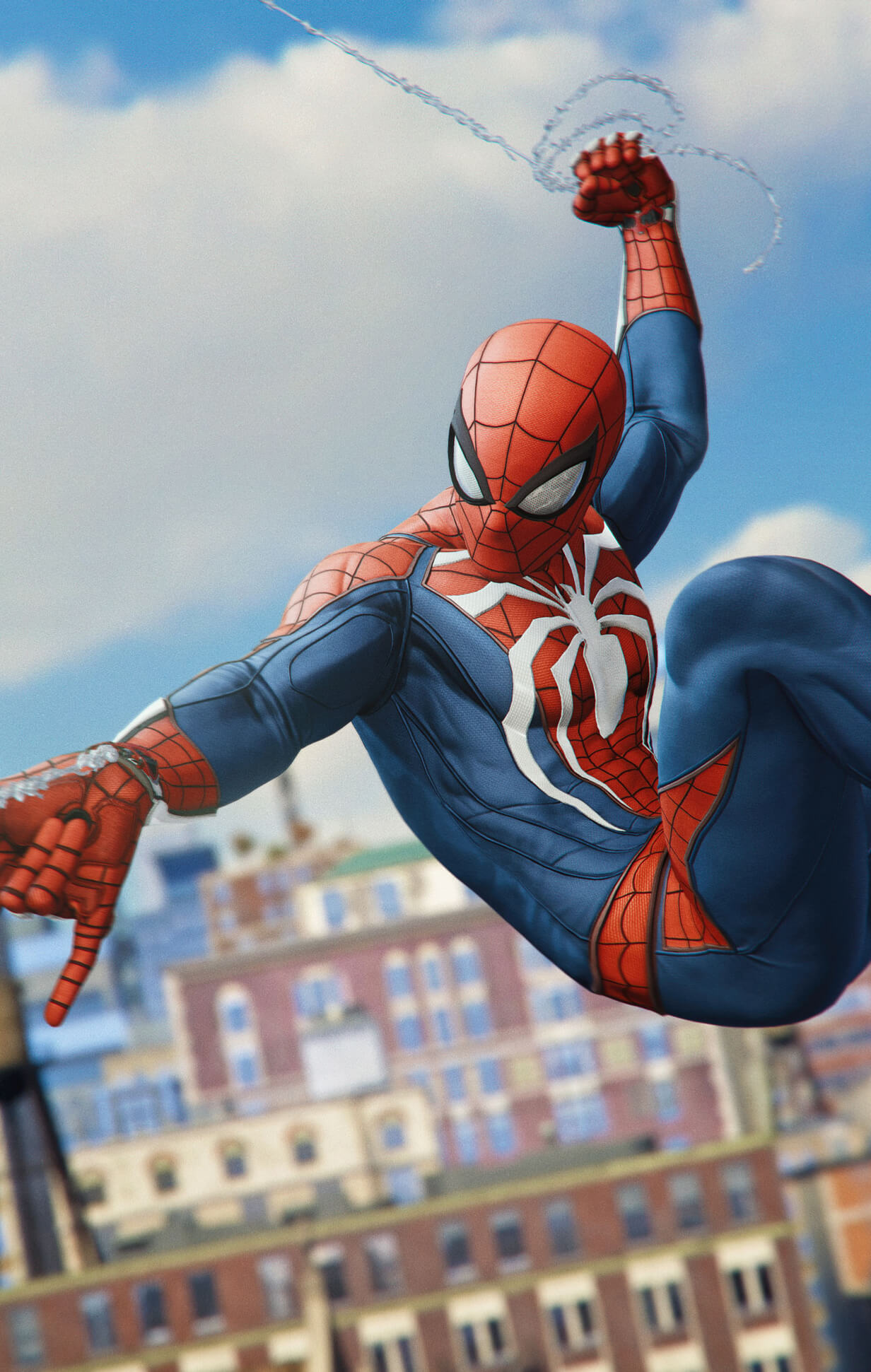 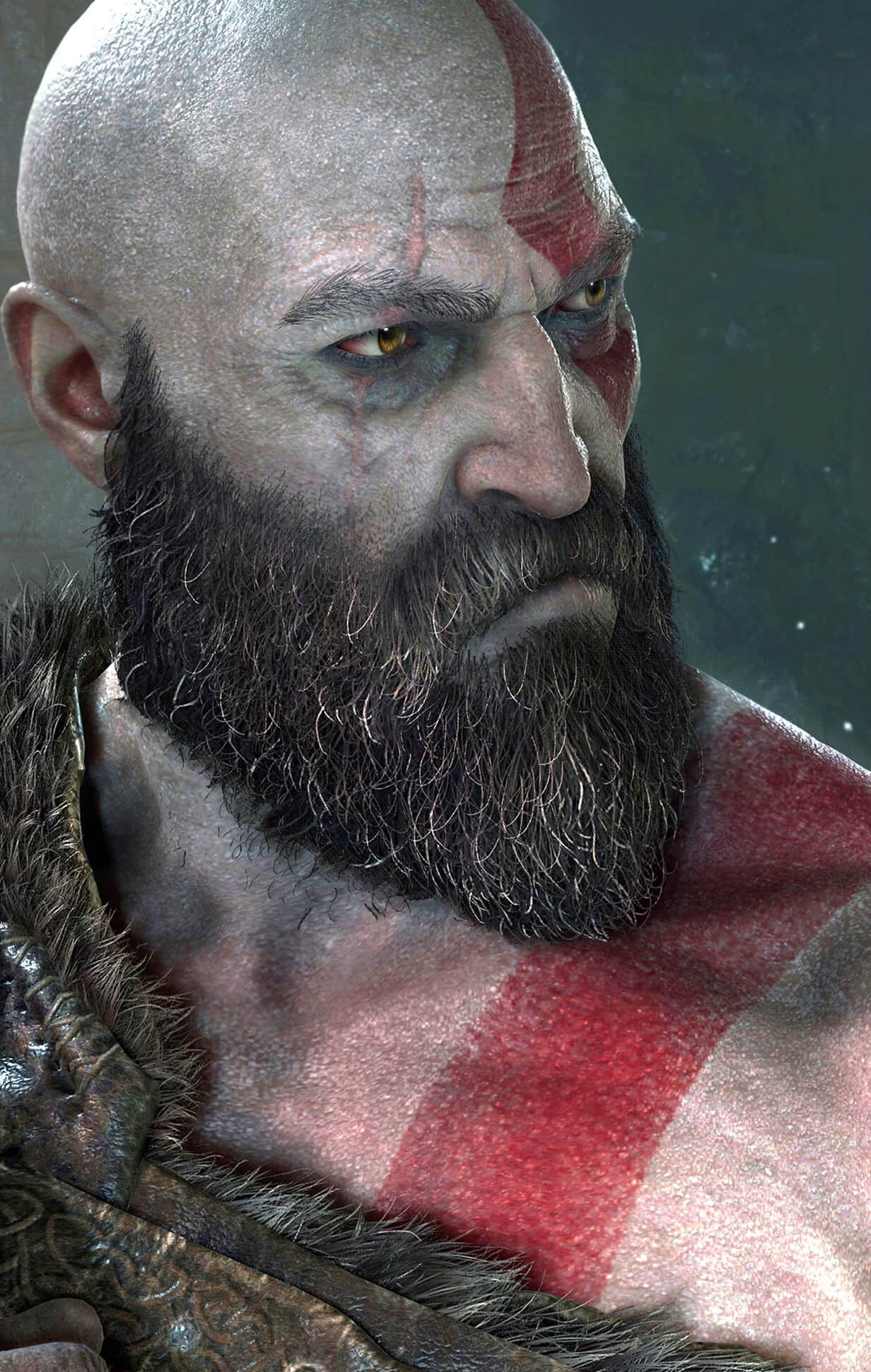 In the eighth instalment, developers Santa Monica Studio brought us a story based on Norse mythology, as you continue as Kratos, God of War.

Many decades after God of War, Kratos and his son Atreus now live in Midgard, ancient Norway. Years after defeating the gods, Kratos finds himself in yet another battle, this time with a mysterious man, who has godlike powers. After he defeats him, he and his son set off for the highest peak of the nine realms, to scatter the ashes of his late wife.

After encountering the Witch of the Woods, Kratos and Atreus make it to Midgard's peak. Baldur is seen talking to sons Modi and Magni, alongside an imprisoned man. When they leave, Kratos approaches the man, whose name is Mímir. He informs them that they are on their way to Jötunheim, the land of the giants. He advises Kratos that Baldur will not get far on the path, as its been blocked to ensure his father Odin and brother Thor can't reach the mountain. After presenting Mímir’s head to the witch, she revives him, and then reveals herself to be Kratos’ wife Freya. Kratos kills Magni, but when Atreus falls ill, Kratos must retrieve the heart of a troll. After collecting his old weapon, Greek goddess Athena haunts him. Upon taking the heart, his father Zeus haunts him. Atreus quickly recovers, but displays strange behaviour, killing Modi against his father’s wishes. Another confrontation with Baldur leads to the portals collapse as the group fall into Helheim. When Freya’s spell is broken, Kratos finally defeats Baldur and proceeds to tell Atreus about his troubled past, including murdering his father and other Greek gods.

After eventually reaching Jötunheim, they find a mural by the giants, depicting their journey. Overlooking a valley of giants' corpses, they scatter Freya’s ashes. On their return to Midgard, the harsh winter called Fimbulwinter begins; meaning the great battle of Ragnarök will follow. Atreus has a vision that reveals that Thor will soon come for his revenge.

In a game packed full of gods, creatures and monsters around every corner, you navigate the dark forests and steep mountains, setting out to reach the tallest point in all the realms. The character development is great and the combat is mind blowing. This bone-crunching adventure from Santa Monica Studio is one of the best PS4 exclusives out there.

Shadow of the Tomb Raider

Following Rise of the Tomb Raider, developers Eidos Montreal presented us with the twelfth entry in the series, as Lara races to stop a Mayan apocalypse.

Months after the events in Siberia, Lara Croft and friend Jonah head to an island off the coast of Mexico, following Trinity’s path. A clue at an excavation site leads them to murals mentioning the Box of Ix Chel, a Mayan apocalypse and a permanent solar eclipse. Despite the warnings, Lara takes the Dagger of Chak Chel, but Pedro, the leader of Trinity, takes it and tells Lara that she has triggered the apocalypse.

After a tsunami hits the island, Lara and Jonah escape, flying towards the Amazon to catch up with Pedro. After a storm forces a crash landing in the jungle, they head for Paititi, where they find instructions how to halt the Cleansing. The Box must be pierced by the Dagger to grant the user the power of the god Kukulkan. Lara discovers Pedro is the High Priest of the Cult of Kukulkan, but after the queen of the city helps Lara to locate the box, she discovers it has already been taken. Lara then has to escape the Yaaxil, humanoid monsters that guard the box. Lara and Jonah reunite at an oil refinery to find further clues to the location of the box. The body of Andres Lopez, a missionary sent by Trinity is located in a catacomb, along with the box, but Pedro forces her to give it to him. He reveals in order to prevent him from finding Paititi; he ordered the death of Lara’s father. As a massive earthquake hits, they all escape. In order to avoid a volcanic eruption, which would be the fourth cataclysm, the Yaaxil and their leader Crimson Fire agree to help Lara stop Pedro. As the solar eclipse begins, Lara stabs Pedro, just as he begins to absorbs Kukulkan's power. He then transfers power to Lara, but she sacrifices Kukulkan's spirit and stops the Cleansing.

With the Trinity organisation defeated and the queen put to rest, Lara stays in Paititi to help the newly crowned leader, Etzli, restore the city.

This latest entry was a good effort from Eidos. With the breathtaking backdrop of the Peruvian jungle, picking off enemies, whilst blending in to the environment was fun. The challenging crypt and tomb puzzles were a welcome break from the brutal combat, and navigating the stunning underground labyrinths brought back fond memories of the original. 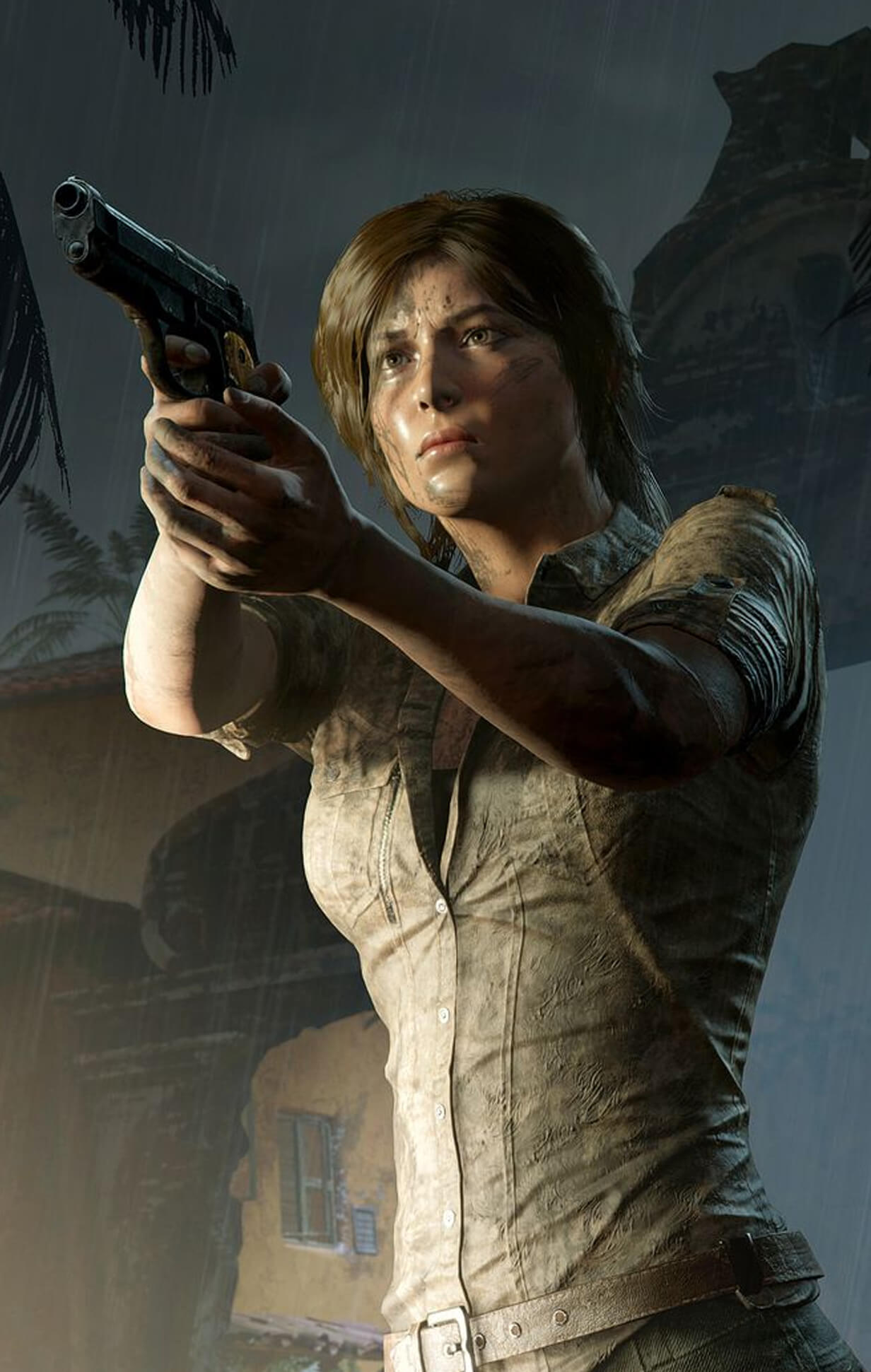 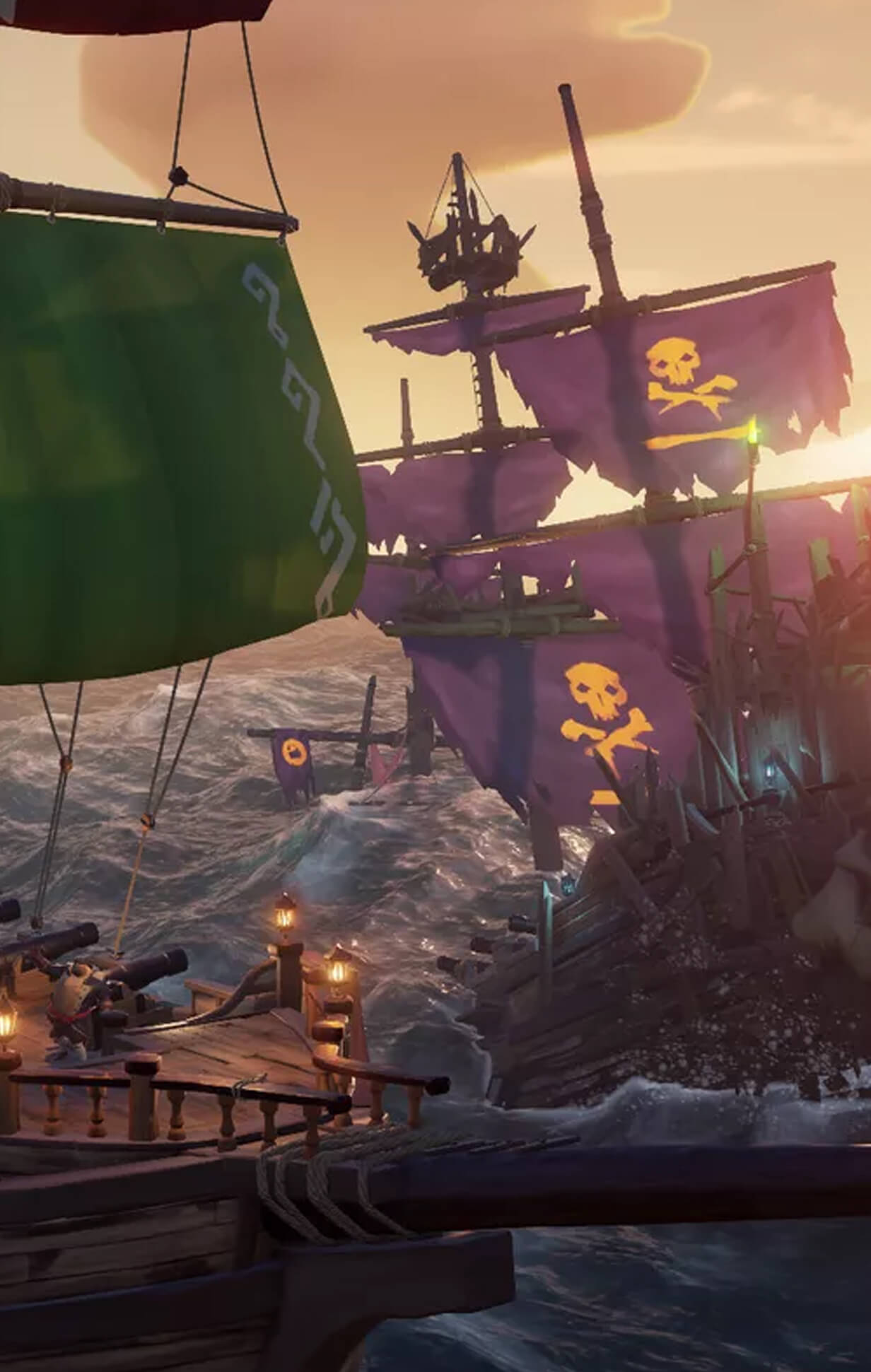 Veteran British game studio Rare brings us a fresh take on the adventure game in this swashbuckling adventure on the high seas.

The player assumes the role of a pirate, and that’s about it in terms of how the story goes, because whatever happens next is up to you. Whether you assemble a crew of other players online to plunder and explore together, sailing the high seas in a galleon or go it alone in a little sloop, the ultimate goal is to become an ultimate pirate legend.

You and your crew take on voyages from different trading companies dealing in gold, merchandise or collecting the souls of dead pirates. When delivering items back to the companies, you’ll level up and get paid in doubloons to spend on items for yourself or your boat.

This may sound a little repetitive, but here’s the fun part. In the game world there are also rival pirate crews to contend with. Either make peace with the other ships or take them out and steal their booty!

It’s safe to say that Sea of Thieves is a beautiful game, it’s cartoony art-style gives the game a great sense of character and it’s the best looking sea you’ll ever... see in a video game. Just don’t stare too long, or you'll lose your sea legs.