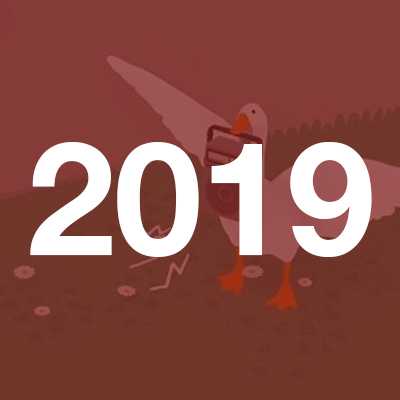 Exploring our favourite video games from the year 2019

This blog series is all about the best games of the last 20 years. George and Matt from the Monitor Audio team take a look at each year and pick their favourites. In this post, we’ll be going back to the year 2019.

With the next generation of consoles on the horizon, Google throws its hat into the ring with it's streaming service Stadia as Sony and Microsoft announce they are working on the next PlayStation and Xbox. 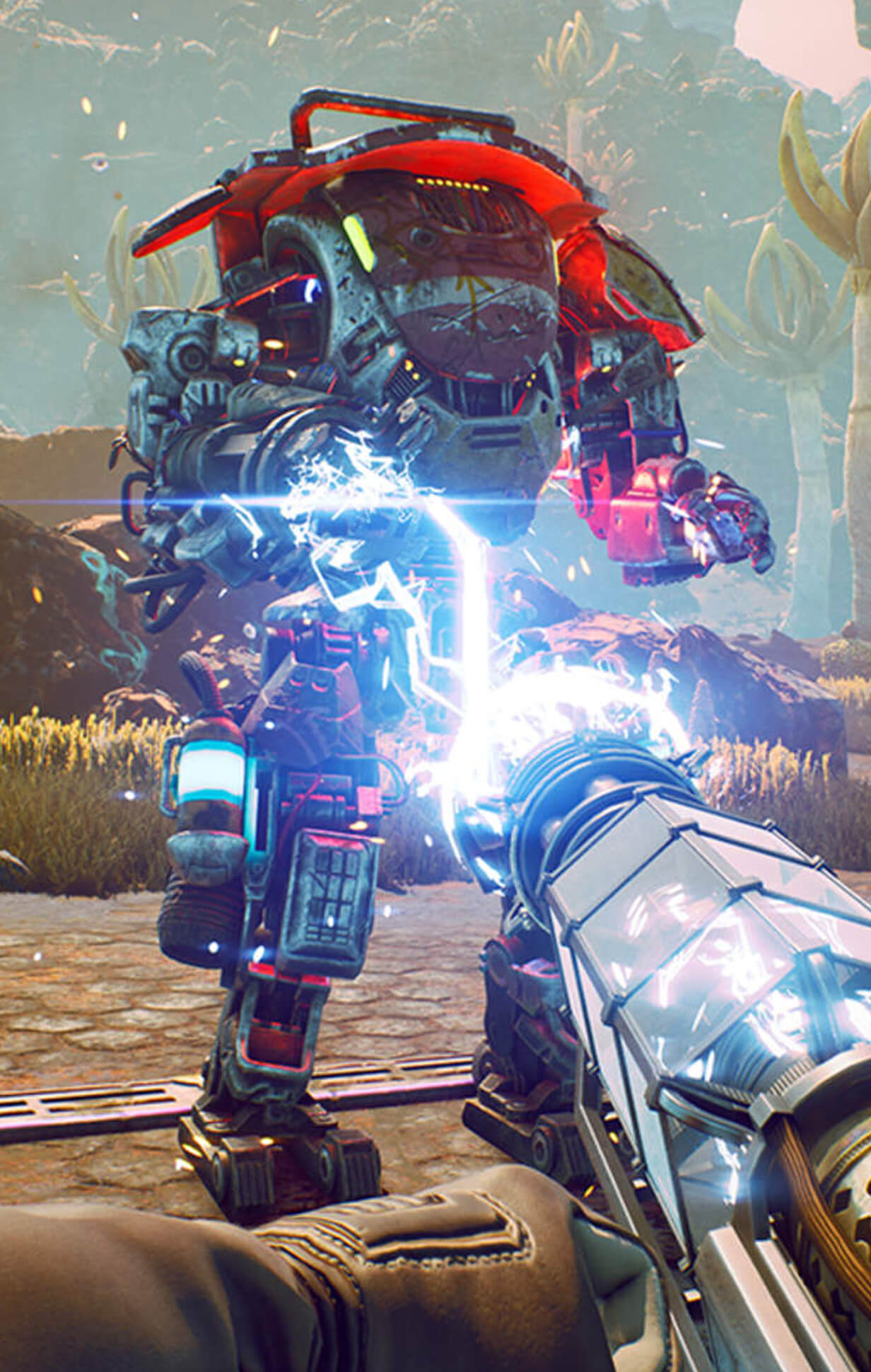 Developers Obsidian Entertainment brought us an RPG set in an alternate future, where residents of Earth colonise alien planets.

You play as the Stranger, who, in the year 2355, is found by scientist Phineas Welles, whilst drifting the Halcyon system, on board the Hope colony ship. 70 years prior, two ships; the Groundbreaker and Hope were sent to colonise Halcyon, but Hope never arrived. A faction, known as The Board, institute policy and law throughout the Halcyon colony.

The Stranger begins to secure resources, in the hope of reviving the remaining Hope colonists, by visiting six planets. On board the Unreliable, piloted by AI named ADA, the first trip is to Terra 2. You are met with the first of many choices, as you divert power to the town, run by the Board to deserters, who want to free themselves from oppression. As you either pledge yourself towards the Board, or Welles mission to save Halcyon, you begin to recruit crew members. In what should have been Halcyon's second habitable world, the next trip is to Monarch, a moon, as you look to locate dimethyl sulfoxide. At Stellar Bay, you side with MSI or the Iconoclasts faction, negotiating peace, or helping one to destroy the other. In the capital of Byzantium, dimethyl sulfoxide is located, intended for Board Chairman Rockwell. His plan was to put the majority of colonists in cryosleep, giving their supplies to the wealthiest citizens. Upon retrieving it and arriving at the Hope, it becomes clear what happened 70 years prior. A fault extended the planned 10-year mission to 60 years, locking everyone in cryo-chambers.

With multiple endings, you can decide on the colony’s fate. One ending results in the Hope flying into Halcyon's Sun, but I played two similar endings; rescuing Welles from the Board and vice versa. As you finally take charge of humanity’s future, the legend of Unreliable lives on.

Nearly a decade after Fallout: New Vegas, Obsidian echoed the mechanics using the Unreal Engine, to bring us a much shorter, but triumphant RPG. Alongside its fast paced combat, you have a huge choice of fantastic dialog, skill customisation and extensive quests for each of your crew. If that wasn’t enough, don’t forget the shrink ray!

As a deadly enemy corrupts reality, you must investigate its origins, in this action adventure from developers Remedy Entertainment.

In the present day, you play as Jesse, travelling to the Oldest House, in New York, which is the Federal Bureau of Control (FBC) headquarters, to gather information of the whereabouts of younger brother Dylan.

17 years prior, the two came across a slide projector. They soon encountered a mysterious, unseen intelligence, which communicated with them telepathically. When the entire population of their hometown of Ordinary disappeared, it was deemed an ‘Altered World Event (AWE)’ by the FBC, who began to investigate. Despite helping them, Dylan was taken and never seen again. Jesse was taken under psychiatric care when nobody believed her. In the present day, Polaris summons Jesse to the Oldest House, where she soon discovers the Director dead from an apparent suicide. Upon taking over, she discovers that a hostile force, known as the Hiss, has been turning the agents into slaves. The janitor advises Jesse to repair the building, in order to prevent a meltdown. Whilst moving through and unlocking areas of the building, she finds various FBC members, who may have an idea as to Dylan’s location. Using Hedron Resonance Amplifiers, Jesse and the other FBC members protect themselves from the effects of the Hiss. After realising he was being kept in confinement for killing agents, Jesse eventually finds Dylan, who has surrendered for his role in working with the Hiss, believing it was his only chance of escape. After navigating the maze, Jesse doesn’t find the projector, but instead finds a containment chamber, containing an organism called Hedron, who they named Polaris.

After the Hiss kills it, she restores control by rediscovering Polaris's essence. Soon after discovering the projector, she enters the plane and defeats the Hiss. After saving Dylan, Jesse takes on her new role and vows to eradicate the remaining Hiss from the Bureau for good.

With help from the Encounter Director, you immerse yourself into a fascinating world, where anything is possible. With its extraordinary combat, as your psychokinetic powers grow, you can control enemies or launch debris to defeat them. Although chaotic, this refreshingly unique story from Remedy Entertainment offers a truly impressive adventure. 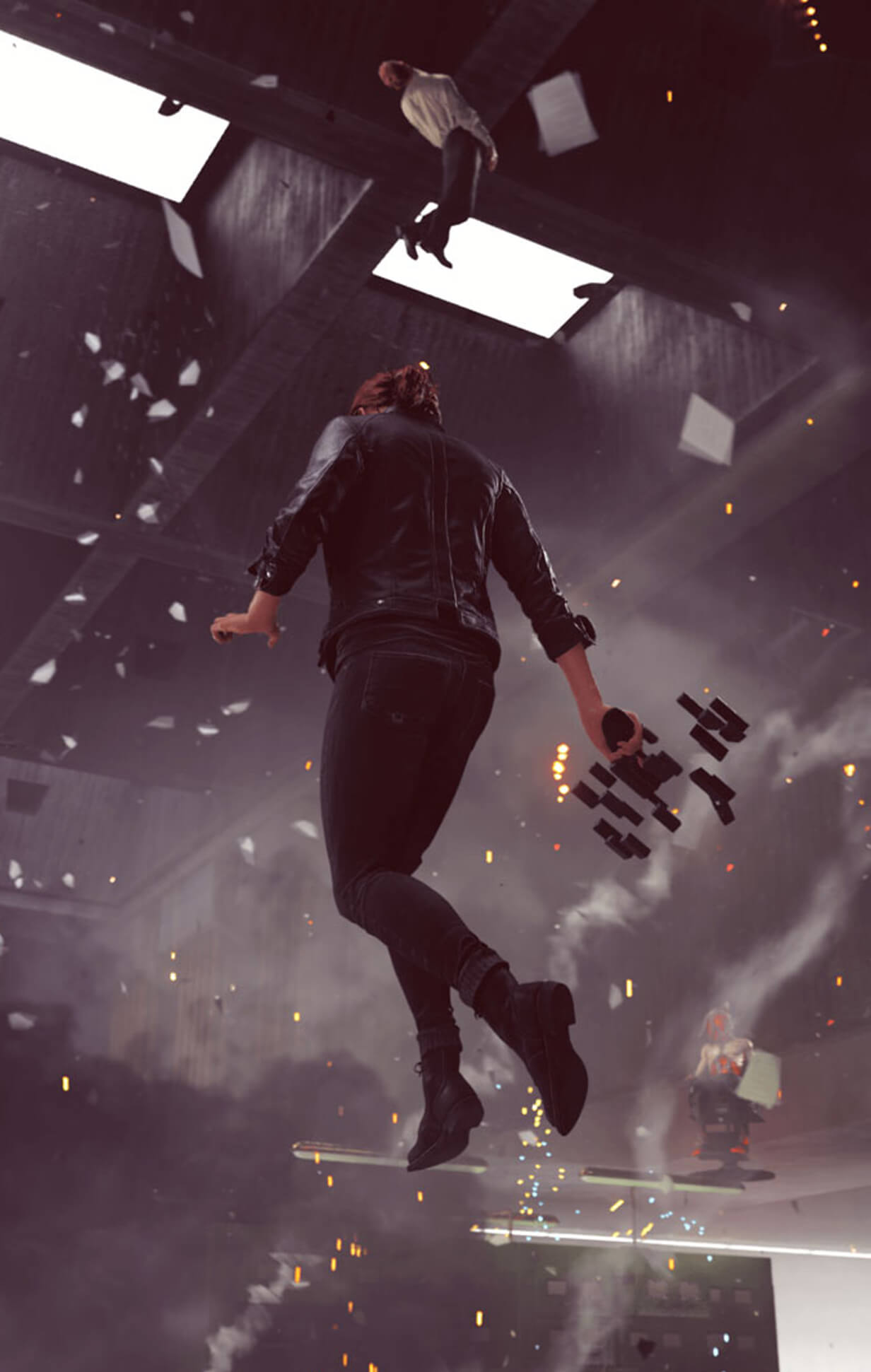 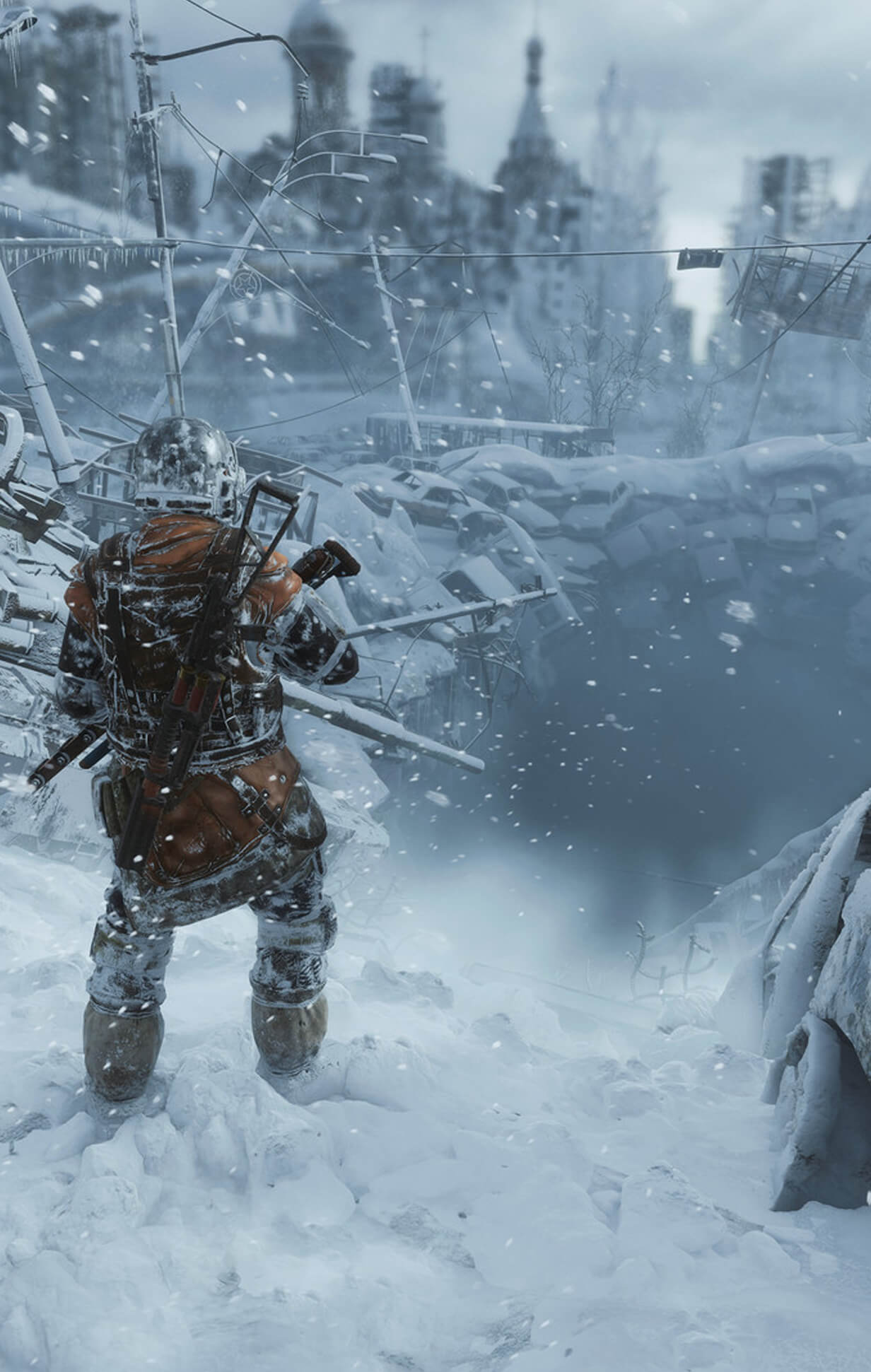 4A Games | Deep Silver | PlayStation 4, Xbox One and PC

This first person shooter, from developers 4A Games, is set in the post-apocalyptic wasteland of Russia, devastated by nuclear war.

Set in the year 2035, as the survivors of the nuclear war continue to shelter in the Moscow Metro, you play as Artyom, part of an elite group of battle hardened rangers, called SPARTA. Desperate to find other human survivors outside of Moscow, Artyom finally decides that its time to leave the Spartan Order.

On a routine expedition with his wife Anna, soldiers, believed to be living outside of Moscow capture them, leaving Artyom for dead. Whilst following them, he comes across a signal jammer, blocking all communications. Upon destroying it, transmissions from all over the world prove Artyom’s theory. A locomotive is used to escape, as the Spartans join them on their journey along the Trans-Siberian Railway. After hearing a broadcast, they believe the Russian government has rebuilt itself, and head for Mount Yamantau. Cannibals, who now occupy the facility, take Commander Miller, Anna’s father. As the group fight back and escape to safety, they decide to travel further eastwards, in search of a place to live in. Heading to a satellite communication centre, they hope to find habitable land and soon realise they are against the clock, when Anna begins to cough up blood. Artyom visits the taiga forest valley, but radiation makes it uninhabitable, so instead moves forward with finding an antidote in Novosibirsk. Being exposed to various chemicals has altered some humans and turned them into mutants. Artyom faces off against a mutant and whilst taking huge doses of radiation, is severely wounded. Despite this, he retrieves the antidote, but Miller dies of poisoning before they make it back to the train.

As Anna is cured, the group use the satellite to reach Lake Baikal and after Artyom recovers from his injuries, he takes charge and decides to return to Moscow to inform their allies of their new radiation free home.

The sequel to Last Light offers a dynamic world with more set pieces, mutants and objectives. In the harsh wasteland, the story offers just a glimmer of hope, but its horror elements thrust you into the deep end, so prepare to scurry around in the dark. Its not without its flaws, but is still one of the best sandbox survival games I’ve experienced.

Capcom | PlayStation 4, Xbox One and PC

Bringing back a fan favourite is risky business, but the team at Capcom delivered a stellar retelling of the highlight of the series.

Heading to his first day as part of the Racoon City Police Department, Leon Kennedy meets Claire Redfield at a service station outside the city, shortly after saving her from being attacked inside the petrol station. Claire tells Leon that she is searching for her brother Chris, and Leon agrees to drive her into the city. After a car accident, the two get separated in the city and agree to meet at the police station. Playing as either Leon or Claire, they make their way to the police station and find that it’s infested with zombies and another monster called the ‘Tyrant’ who stalks you around the station. After escaping the police station, if playing as Leon, you meet FBI agent Ada Wong in the parking garage. She convinces Leon to help her break into the secret underground base of pharmaceutical company Umbrella to retrieve a sample of the G-Virus to prove the company’s corruption. Meanwhile scientist William Birkin is confronted by Umbrella mercenaries after attempting to smuggle the G-Virus out of the facility to sell to the US Government. Shot and left to die, he injects it into himself, reviving him but slowly mutates him into a monster.

Breaking into the NEST facility, Leon obtains the G-Virus sample, but is attacked by William. William’s wife and colleague attempt to kill William, but is mortally wounded. Upon attending to her, she tells Leon that Ada is actually a mercenary and intends to sell the bioweapon to the highest bidder. The lab’s self destruct sequence goes into effect. Ada at gunpoint demands the virus from Leon, but before dying, Annette shoots Ada knocking her off of a bridge. Trying to save her, Leon loses the virus into the abyss then loses grip of Ada.

After a final battle with William, Leon boards an evacuation train where he meets up with Claire, who’s faced a similar story.

Capcom truly brought this classic to a whole new generation with upgraded story, gameplay and a gorgeous aesthetic. 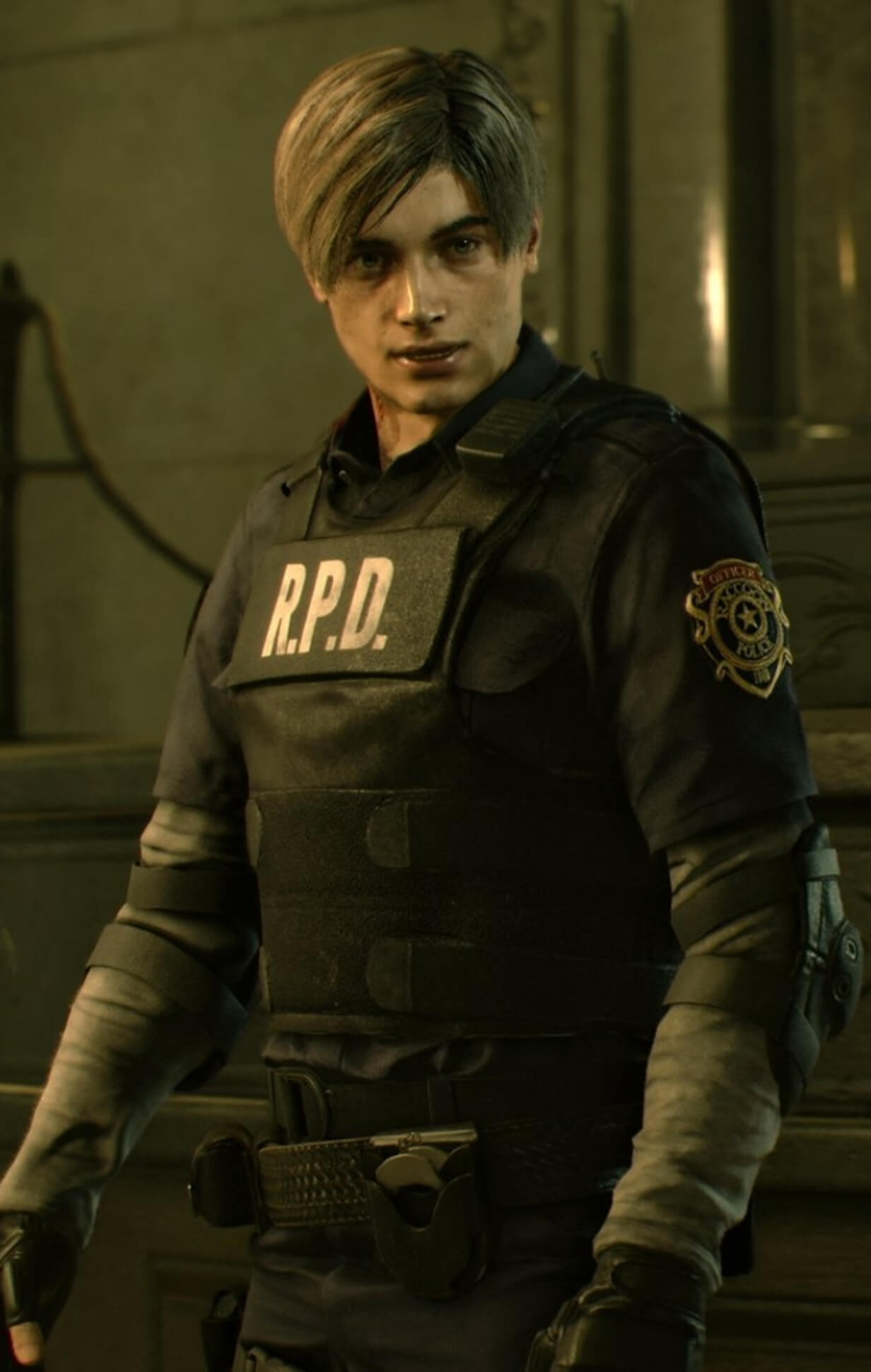 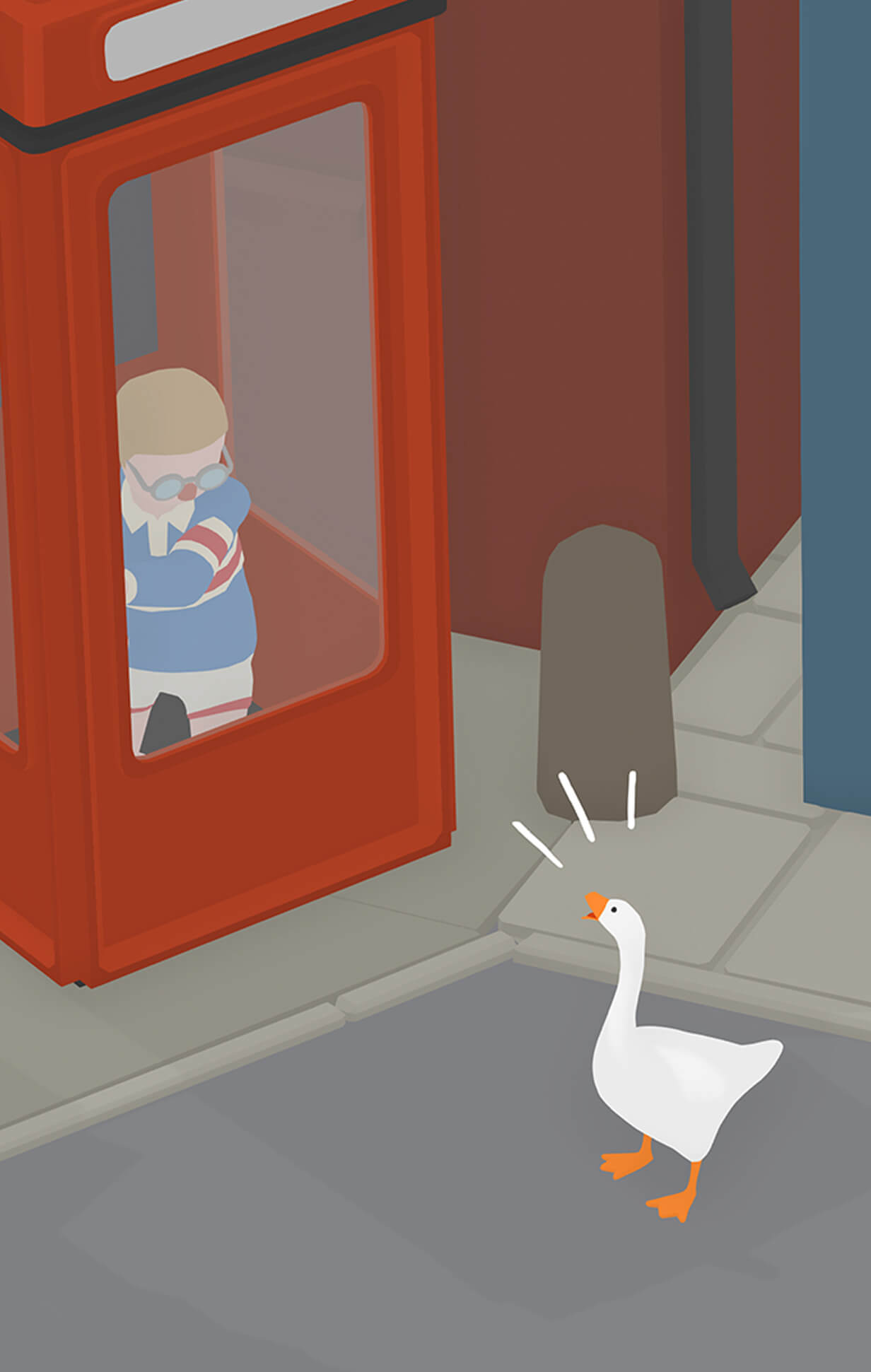 Hero or villain, you decide with this wholesome story about a troublesome goose in a small English village by Australian indie developer House House.

In an idyllic village, you take control of a domestic Goose who can honk, run, flap its wings and grab objects with its mouth. All to fulfil the objective of bothering the townsfolk, from stealing a shop keepers goods to chasing a little boy into a phone box and trapping him there.

There’s something satisfying about wholesomely annoying people, and stealthily stealing objects, without getting caught by the humans.

The game features a distinctive, colourful art style with an endearing piano based soundtrack.

The title came about due to a last minute submission to a game festival and just stuck.