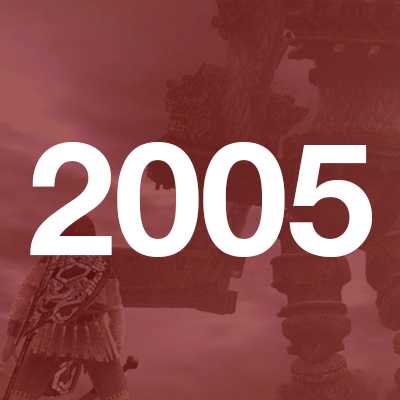 Exploring our favourite video games from the year 2005

This blog series is all about the best games of the last 20 years. George and Matt from the Monitor Audio team take a look at each year and pick their favourites. In this post, we’ll be going back to the year 2005. 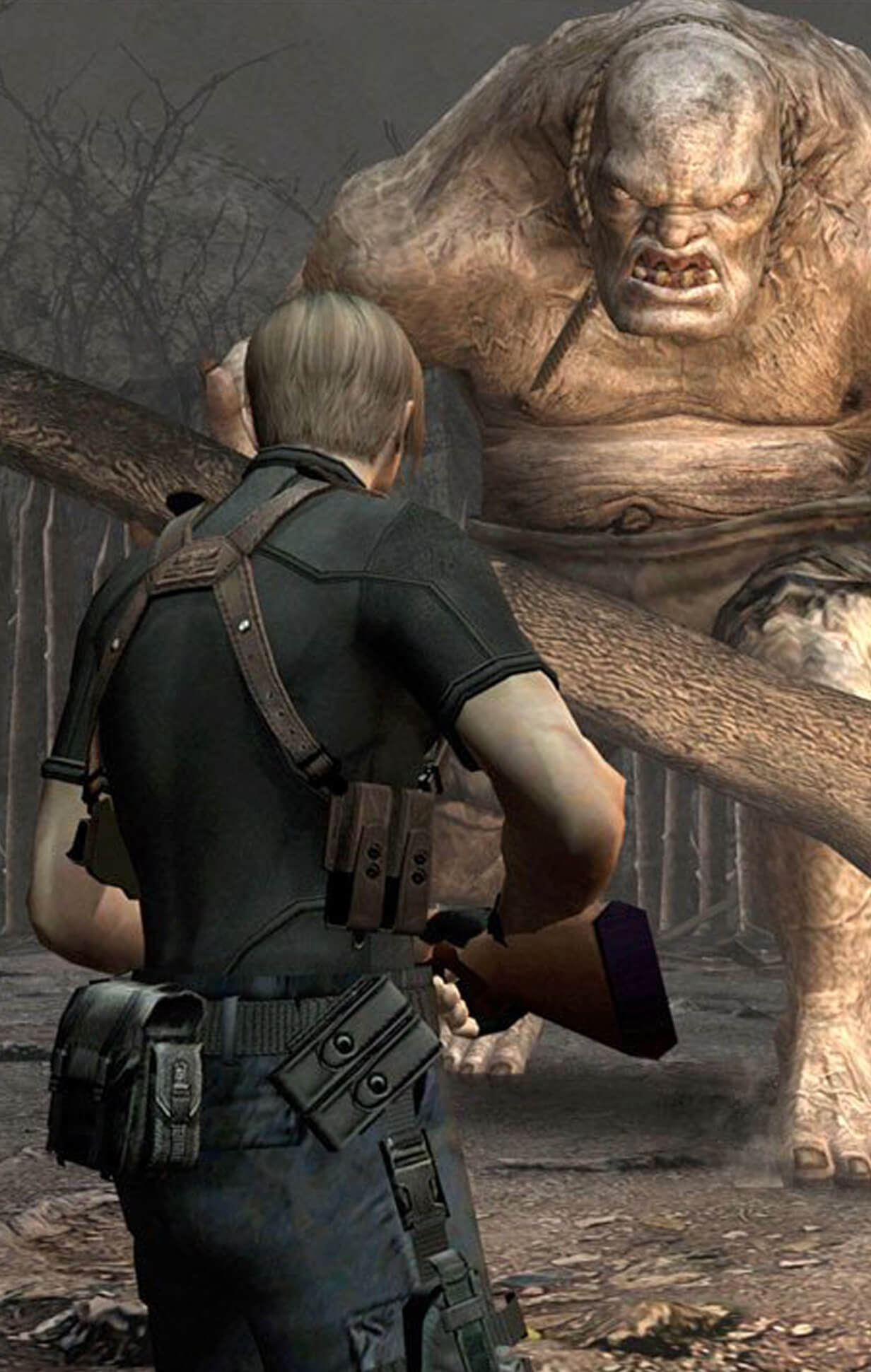 In a bold move, after the destruction of the Umbrella Corporation, Capcom moved away from the traditional city streets and starts you off in a rural village in Spain. No longer a Raccoon City Police rookie, the U.S. government has tasked Leon with rescuing Ashley, the U.S. President's daughter from a dark cult, by the name of Los Illuminados.

After becoming infected by a mind-controlling parasite known as Las Plagas, the villagers, who were once farmers, now known as Los Ganados, have become hostile, pledging their lives to Los Illuminados. The village chief Mendez captures and injects Leon with Las Plagas. Leon, alongside former Los Illuminados researcher Luis, work together to escape, before rescuing Ashley and eliminating Mendez. After being infected, the search is on for the pills to slow the infection, whilst fighting their way to a nearby research facility. After meeting people from his past, Leon discovers their plan to infect the U.S. President, before escaping from the island.

In an audacious move, Capcom had an over the shoulder view, as apposed to the first-person perspective used in the previous games. This was a welcome change as was allowing the user to interact with various elements of the environment. I had great fun using the laser sight to target key hit zones on enemies, and it offered multiple action segments with lots of button smashing, for the quick time events, such as running from an enemy or dodging an attack. Despite the questionable story, it was certainly entertaining. The gameplay was smooth throughout, with multiple puzzles and epic boss fights, moving quickly to each location gave the game a lightening fast pace, ensuring there was never a dull moment.

Although it had fewer survival horror elements and focused more on shootouts, it’s still extremely creepy and its popularity meant it became one of the most ported video games of all time, reinvigorating the series.

This lethal action-adventure game from Santa Monica Studio, based around ancient mythology, provided a journey like no other.

The first game in the God of War franchise follows a Spartan warrior, by the name of Kratos, a ten-year veteran who serves the Olympian Gods. Set in ancient Greece, the goddess Athena tasks Kratos with a merciless quest to kill her brother Ares, the God of War, Kratos' former mentor. He must first find Pandora's Box, which holds the secrets to defeating Aries, who is rampaging out of control throughout Athens.

We see through a series of flashbacks that Kratos once served Ares, who saved the Spartan and his army from annihilation in battle. Kratos served Ares after he spared his and his armies lives and helped them to defeat the barbarian king. However, Ares later tricks Kratos into killing his family, which forced his evolution into the "Ghost of Sparta”. In hope of ridding himself of the visions of the horrific deed, Kratos vows to serve other gods. After Athena promises to forgive Kratos, he sets out to the Desert of Lost Souls to find the temple containing Pandora's Box. After Ares kills Kratos, he battles through mythology's darkest creatures in the Underworld, with the help of another god and soon recovers Pandora's Box from Ares, becoming godlike himself. Driven by revenge, as Kratos moves to defeat Aries, ascend to Mount Olympus and become the new God of War, will his sins ever truly be forgiven?

As you dispatch waves of enemies using a variety of button sequences, armed with lethal double chainblades, you unleash violent fury upon the Medusa, Cyclops and Hydra. As you start to learn multiple combinations, you can upgrade your weapons and magic and release frenzied attacks, of which I have never experienced before.

God of War is an absolutely brutal game, with a lot of gore, that doesn’t give you a second to breath. Incredible environments, allowing you to wonder as far as you can see, with intricate puzzles throughout, this game was a blast and provided a base for an immense franchise. 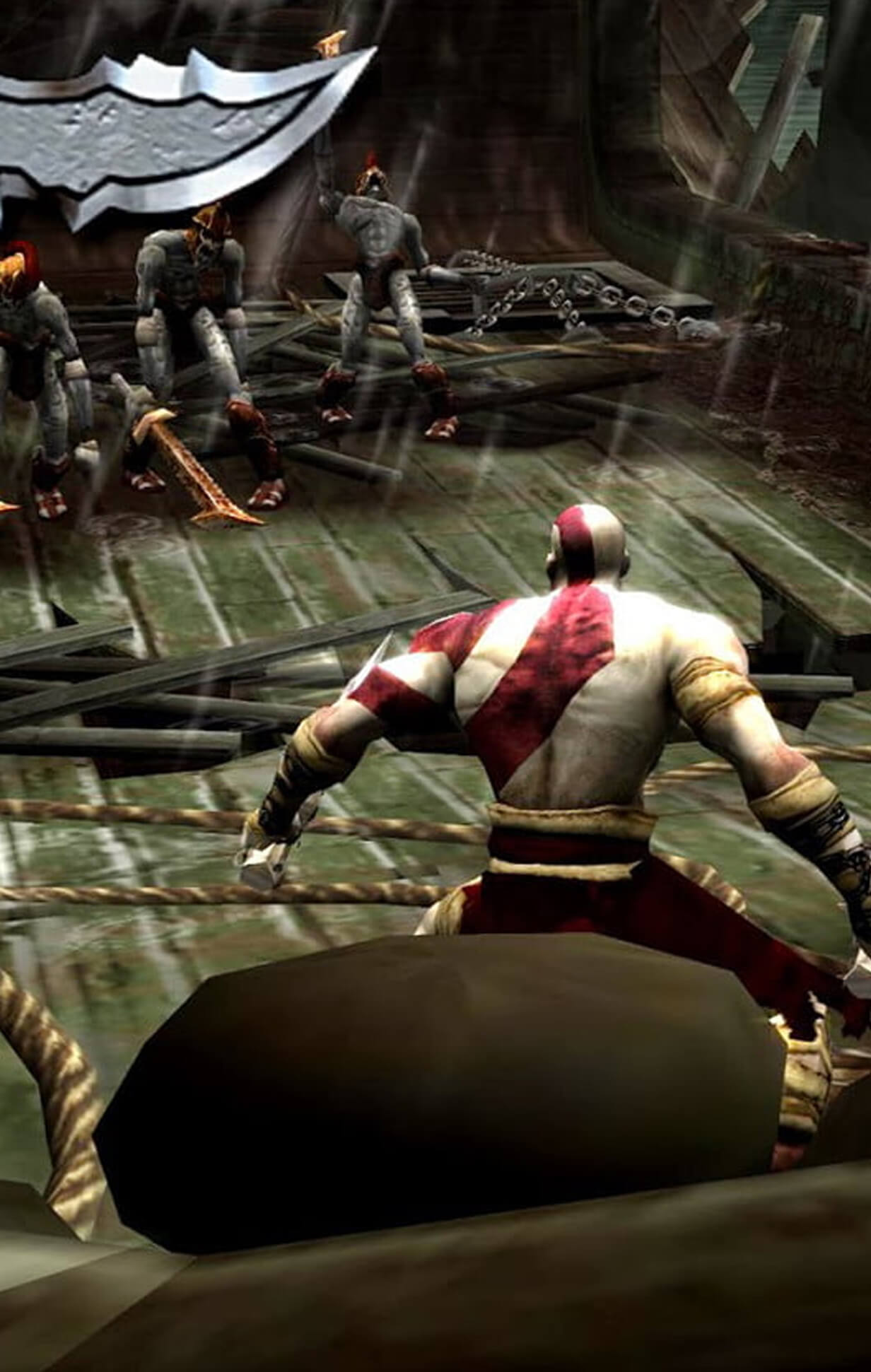 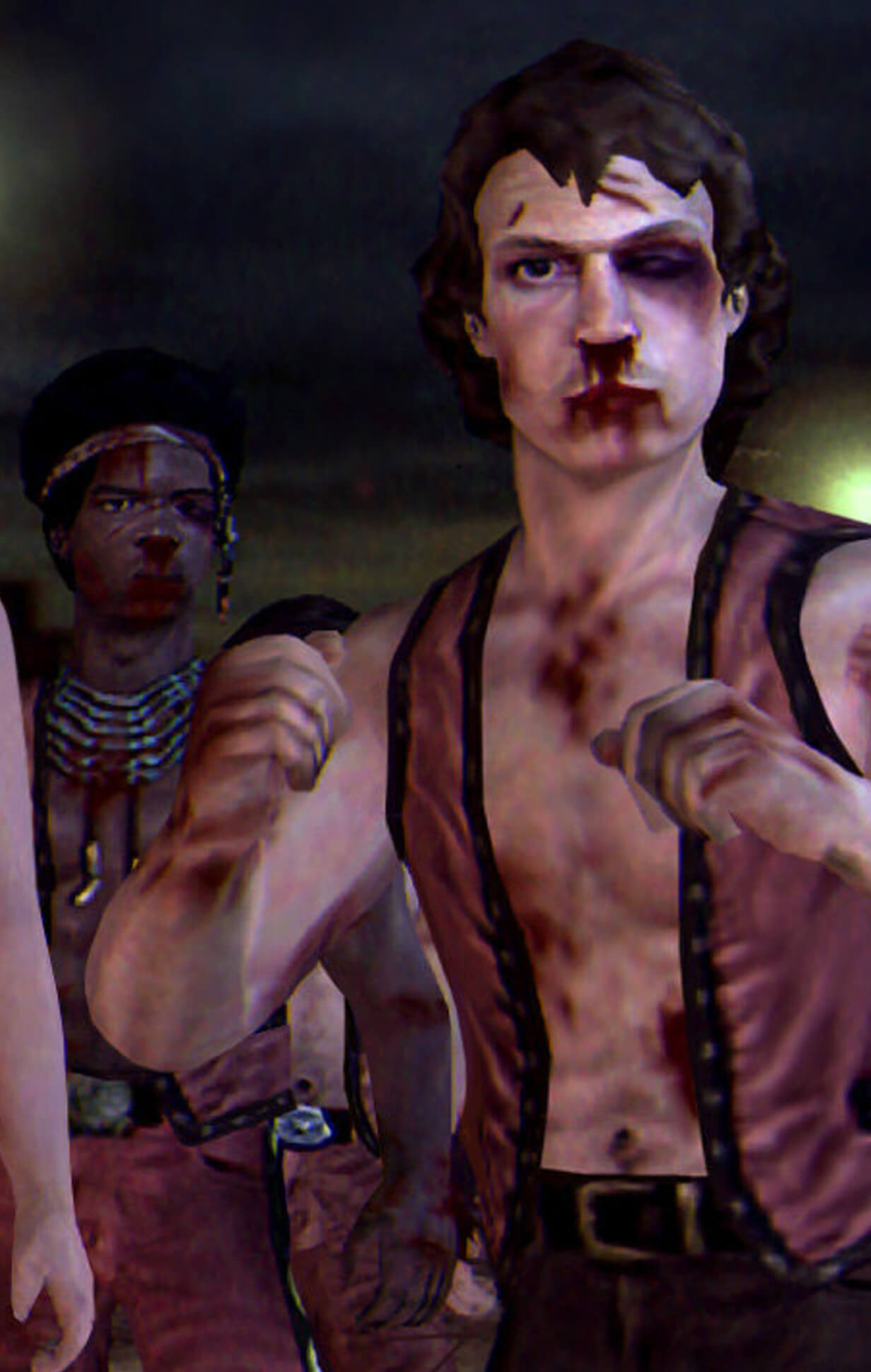 Rockstar take us on a cinematic journey through New York, in this action-adventure survival, based on the 1979 cult film.

Set in 1970s New York, The Warriors are a street gang, consisting of Cleon, Swan, Rembrandt, Ajax, Cowboy and Cochise, all of which are playable characters. The game follows the plot of the film, as Cyrus, respected leader of the Gramercy Riffs, the toughest gang in New York, assembles a meeting with all the other gangs and proposes to the assembled crowd a permanent citywide truce that would allow the gangs to control the city. During the meeting, Luther, the leader of the Rogues gang fatally shoots Cyrus, but they blame The Warriors, who find themselves being chased down by every gang, as they bid to make their way from The Bronx to their home turf in Coney Island.

The majority of the missions are set before the meeting and the final missions cover the expedition back to southern Brooklyn. As you progress through each mission, we see flashbacks of how the gang first formed. The Warriors come across and dispatch members from the Destroyers, Orphans, Hi-Hats, Saracens and Jones Street Boys, gangs, before an encounter with some corrupt NYPD officers. After Cyrus’ death, a radio DJ narrates The Warriors long trek home, as they battle the Turnbull AC, Baseball Furies, Lizzies and Punks. The Warriors and Rogues face off in Coney Island, but when the Riffs receive a tip-off that Luther killed Cyrus, they arrive, to save The Warriors and finally put an end to the Rogues.

As you find yourself button mashing to dispatch the swarms of incoming gang members, each member of your team would have a job to do, whether it was the muscle, money, inventory or scouting. As you fight for your life, using anything you can to your advantage, the gritty New York backdrop was magnificent.

I loved the film and this movie tie-in from Rockstar didn’t disappoint. It was brutal, offering an interactive experience with a real Double Dragon vibe to it. I loved the graffiti, platform jumping and general beat-em-up across a decaying urban wasteland.

Shadow of the Colossus

Developers SCE Japan Studio and Team Ico brought us a work of art, in this extraordinary action-adventure set in a wasteland filled with mythical giants.

Set in the vastly unpopulated and mysterious Forbidden Land, you play the role of Wander, a young warrior, who has arrived at a temple with his fallen love, Mono. After placing Mono down in the Shrine of Worship, a mystifying entity known as Dormin asks what Wander is seeking; he requests that they return Mono's soul to her body. Within the temple hall, there are sixteen idols, all of which represent colossal beasts that roam the varied lands surrounding the temple. Wander is told if he can defeat each colossus, it may be possible. As he leaves the temple alongside his loyal horse, Agro, armed with only his mystical sword and a sturdy bow, he must seek out and find a strategy to slay each behemoth.

Each of the colossi can be found across the many terrains of lakes, plateaus, canyons, caves, and deserts. As you begin your majestic journey, you approach each area carefully, exploring the lands and unearthing the colossi. Each has its own strengths and weaknesses, so you use your wits to devise a plan of action, slowly grinding the enemy down. Once the beasts have been defeated, you absorb their essence, before being transported back to the temple. As you watch the idol crumble, you set out to hunt down the next. As time passes and Wander kills each colossus, a released fragment of Dormin enters his body and he begins to deteriorate. Eventually, after all have been slain, Wander finds himself back in the temple but is killed by shaman Lord Emon, before his body is taken over by Dormin, transforming into a shadowy giant. After Wander and Dormin are sealed within a pool in the temple, Mono awakes and with Agro, they make their way there.

With no levelling up, weapon upgrades, or foes between you and the task in hand, this is an experience unlike any other. With impressive aesthetic, as you explore the world, despite the simple objective, you become lost in its beauty.

An emotional quest, this game requires cunning and patience, buts its well worth the wait. 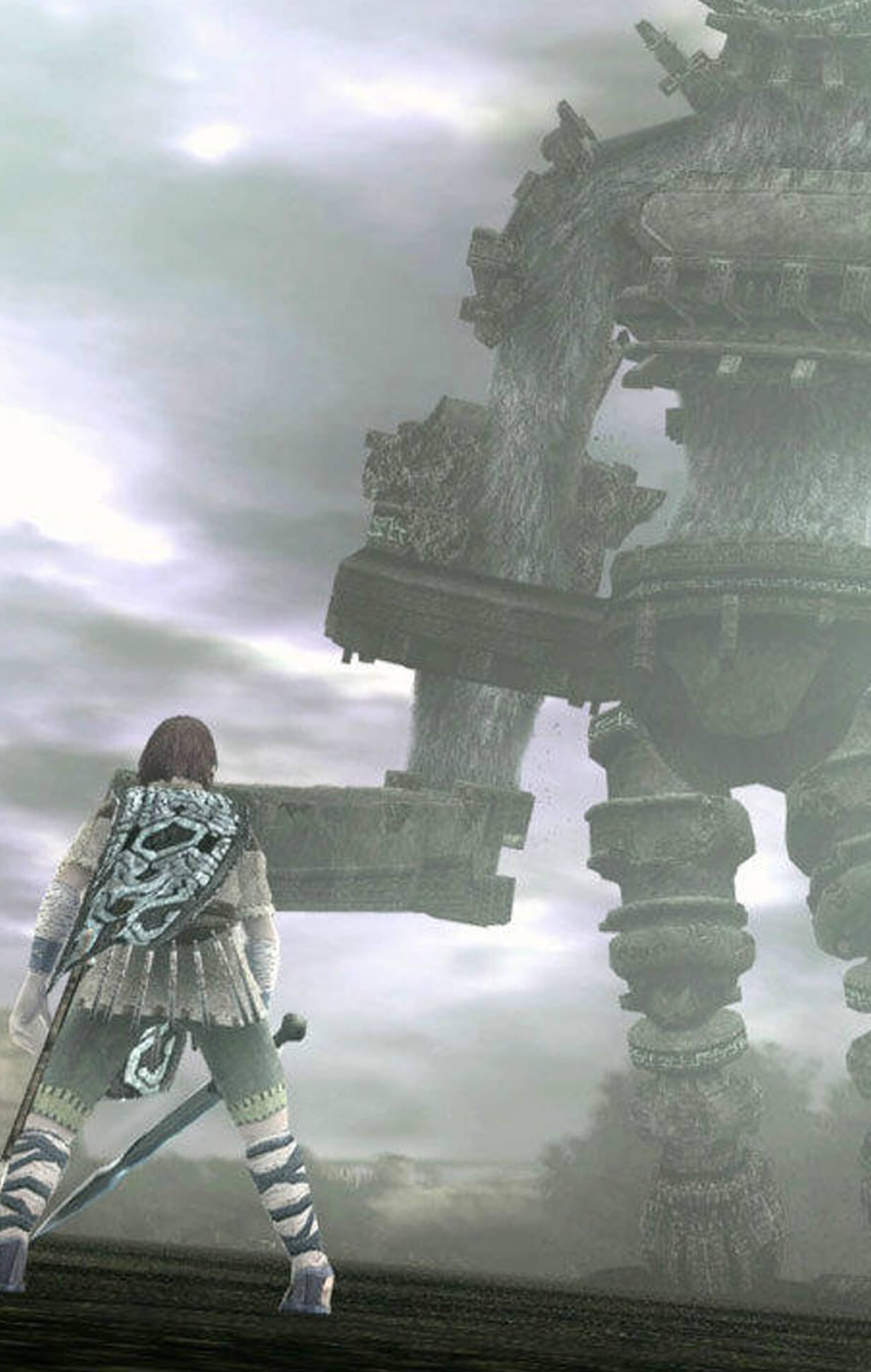 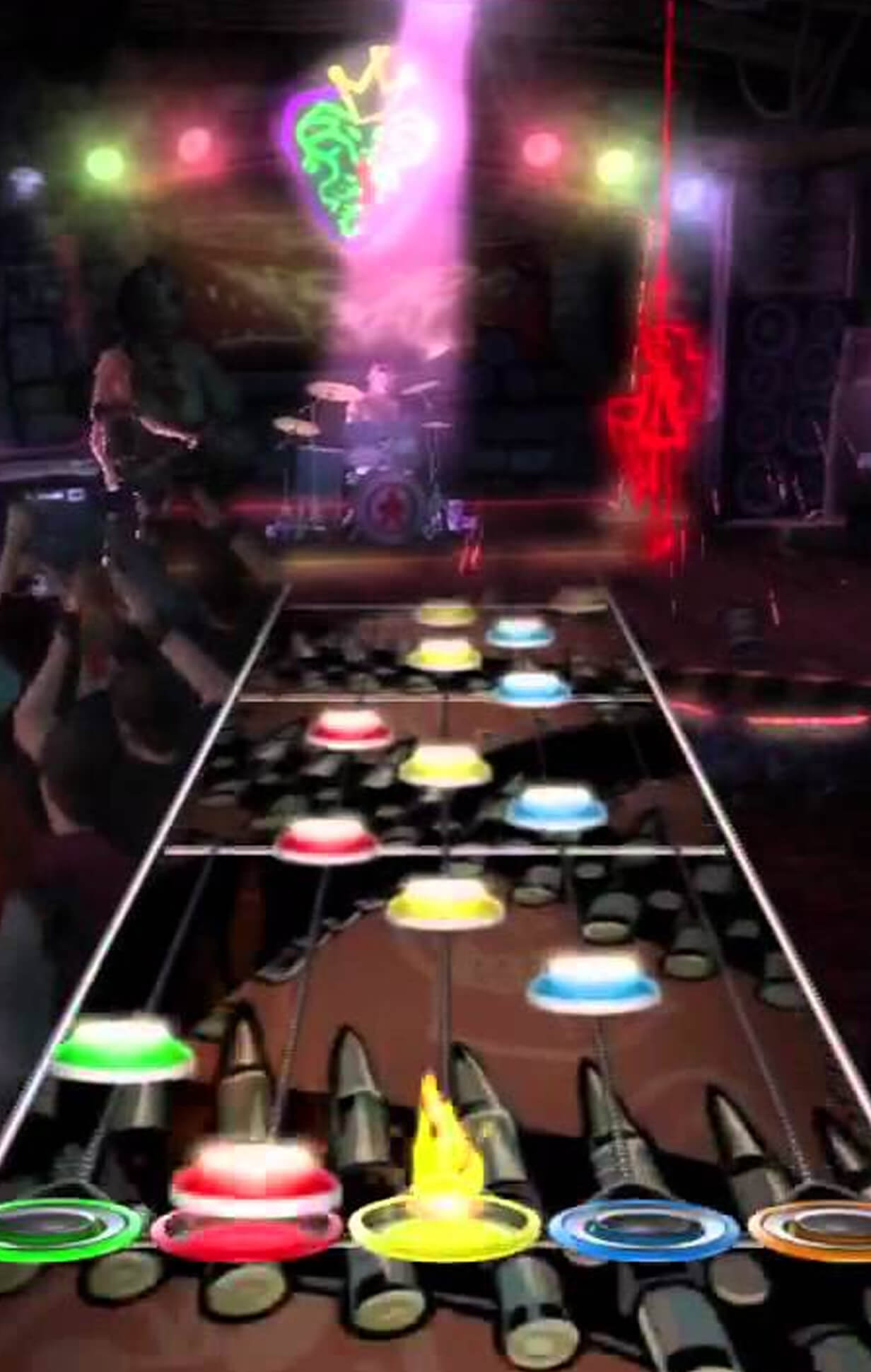 Developers Harmonix transported us into the world of Guitar Hero, in their first instalment, which brings a new meaning to air guitar.

The game features covers of thirty popular rock songs, spanning five decades of rock, from the 1960s up through to the present, 2005. You simulate playing in a rock band, using either the main controller or the preferred guitar-shaped controller, resembling the Gibson SG. Using a combination of buttons, you must press them in time and rhythm with the musical notes that appear on the screen in the variety of different colours, whilst a "Rock Meter" tracks your performance.

The career mode allows you to perform sets at various fictional arenas, along with your crazy looking band; you earn money from each show. You can then use the money to unlock guitars and finishes, along with additional songs, using the in-game store. From metal to classic rocker, there are a number of unique playable characters, each with their own style. With four difficulty levels available, as notes come at you faster each time, you must perfect your technique. There are some incredible bands, thirty in total, with sets from Sum 41, Ozzy Osbourne, Audioslave, White Zombie, Red Hot Chilli Peppers and David Bowie.

Multiplayer was lots of fun, as you compete against your friends on the same song and as you crank it up, you soon find yourself replaying and improving on each song, hitting notes, chords and sustains to earn that coveted five-star rating.

Harmonix did an incredible job recreating the songs and it’s honestly hard to believe they are covers. Whether you want to play in a basement or to a sold out stadium, Guitar Hero really gives you the sense of being a rock star.