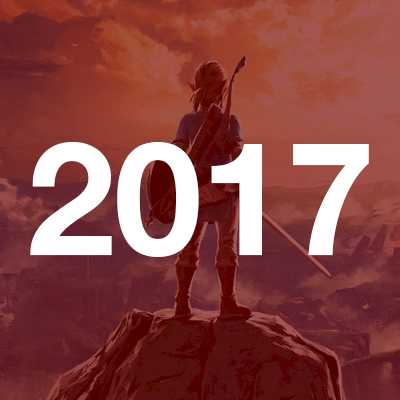 Exploring our favourite video games from the year 2017

This blog series is all about the best games of the last 20 years. George and Matt from the Monitor Audio team take a look at each year and pick their favourites. In this post, we’ll be going back to the year 2017.

With the dawn of a next generation console from Nintendo, home and portable gaming was truly combined with the Nintendo Switch, with possibly the best ever game launch lineup. 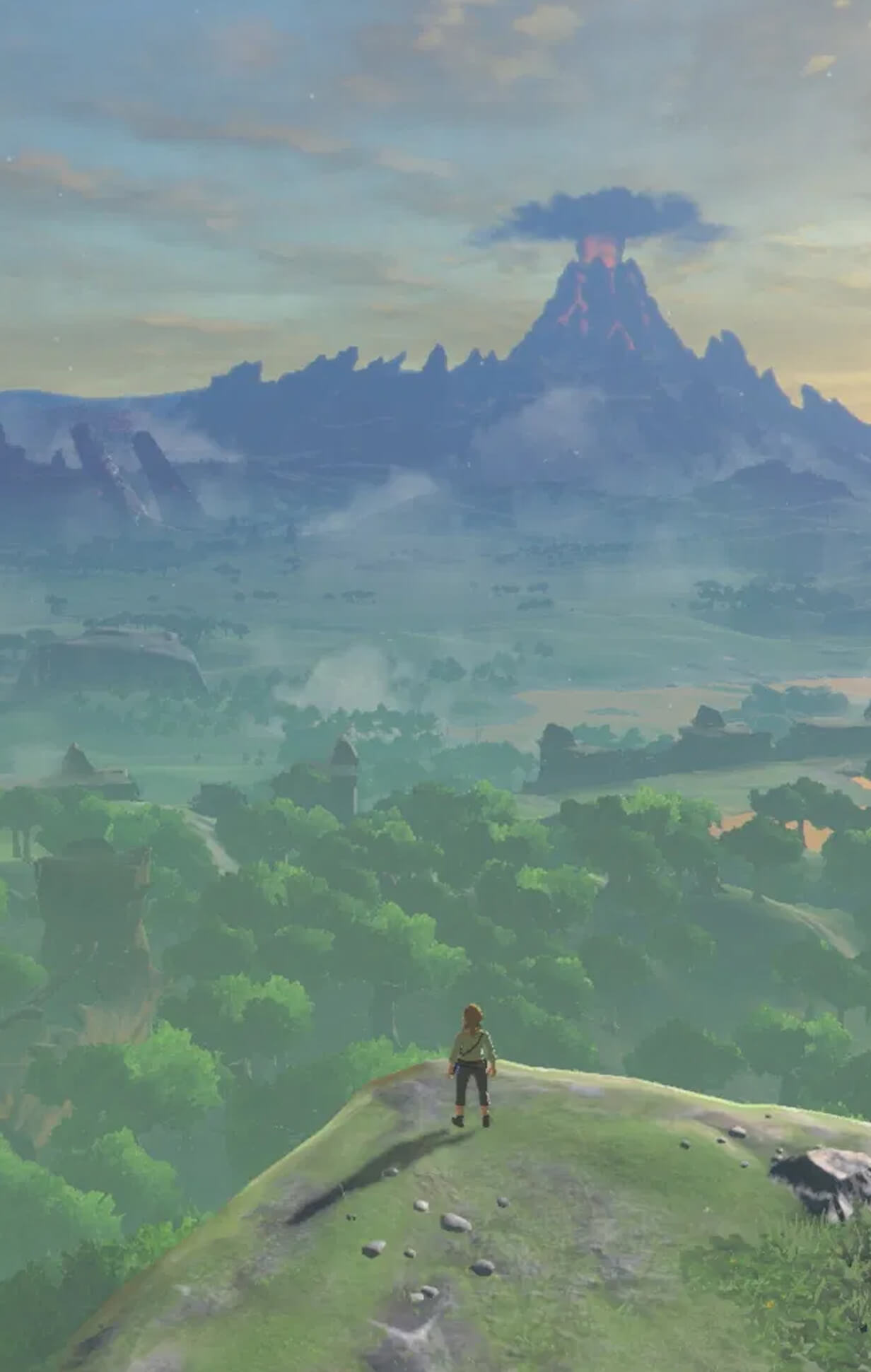 The Legend of Zelda: Breath of the Wild - George's Top Pick

Developers Nintendo brought us a new chapter of the incredible franchise, in their latest adventure, to save the kingdom of Hyrule.

Flashbacks show four mechanical Divine Beasts, 10,000 years ago, alongside Guardians, protecting the city of Hyrule. All made from Ancient Sheikah technology, Van Medoh takes the form of a giant eagle, Vah Naboris a giant camel, Vah Ruta a giant elephant and Vah Rudania a giant salamander. When Calamity Ganon began to attack, four warriors took charge of the Divine Beasts to fight him, whilst an appointed knight sent by the princess sealed him away in his castle.

9,900 years later, as Ganon begins to return, the Hylians excavate the Divine Beasts, but when Ganon takes charge of both them and the Guardians, the champions Daruk, Mipha, Revali and Urbosa are all killed. As the castle is destroyed, King Rhoam was also killed and Link severely wounded, as Zelda locks herself in Hyrule Castle, using her magic to trap Ganon. 100 years later, you awaken as Link, now fully healed but with no memory of previous events. Now in an age where enemies roam the land, the spirit of King Rhoam informs Link of the imminent threat of Ganon, as you make your way into Hyrule. As you regain your memories, with the help of many different Hyrulean races, you learn of each of the Divine Beasts location. As you defeat each of them, you release the spirit of the former champions who had been trapped, allowing them to pilot and prepare to attack Ganon. Once you acquire the Master Sword, which Zelda previously hid, Link enters Hyrule Castle for the finale.

After rescuing Zelda, defeating and sealing Ganon away, the four champions, alongside King Rhoam’s spirit, are finally free to depart. Zelda then requests that Link help her to restore and rebuild Hyrule.

In this breathtaking open world, the nonlinear gameplay allows complete freedom to explore cities, mountains, villages, vast lakes, a barren desert and deep forests, alongside many ancient temples. Delve into dazzling puzzles and lively side quests, whilst climbing, swimming and paragliding across the astonishing landscape. Breath of the Wild is a unique and exhilarating experience with hundreds of hours of fun.

Nintendo took the familiar formula of Super Mario 64 and expanded on it, in Mario’s latest journey aboard the Odyssey to save Princess Peach.

In the tranquil Mushroom Kingdom, Bowser kidnaps Princess Peach, along with his four rabbit wedding planners, known as the Broodals. Topper, Hariet, Spewart and Rango are subordinates of Madame Broode, a morbidly obese rabbit in a red dress and hat. As Bowser makes it clear that he will forcibly marry Peach, Mario is thrown off his ship. As Mario’s cap is shredded, he lands in Cap Kingdom.

A race of ghostly hat-like beings called Bonneters are found in Cap Kingdom. Mario is helped by Cappy, who manages to find a piece of Mario’s hat. Cappy explains that his sister Tiara is due to be used as Princess Peach’s tiara for the upcoming wedding. Together they set out to rescue them both, as Cappy takes the shape of Mario’s hat, they move forward to Cascade Kingdom. There, an airship called the Odyssey allows them to explore the various kingdoms, where different Broodals await them. Each kingdom contains precious Power Moons, which power the Odyssey and unlocks the next kingdom. As the Broodals pick up a dress, a cake, and a bouquet for the wedding, Mario and Cappy close in on them, defeating each one in a challenging arena. As you move between the lively streets of Metro Kingdom, the underwater city of Lake Kingdom and the dusty Sand Kingdom, you must pick up coins to purchase outfits that allow you to complete objectives. Throwing Cappy will allow you to possess enemies, such as the Bullet Bill and Tyrannosaurus, to cross various platforms and defeat larger numbers of enemies. As Bowser takes Peach to the Moon Kingdom cathedral, Mario and Cappy save both Peach and Tiara, stopping the wedding.

Mario is devastated when Peach turns down his own marriage proposal, but she is grateful for being saved. The group leave Bowser on Moon Kingdom and make their way home. On their return, Peach sets out to discover all of the kingdoms Mario and Cappy previously visited.

With welcome distractions, the beautiful blend of colours, sheer number of interactive characters and creative objectives, Super Mario Odyssey offers a lot of fun. This inventive game from Nintendo is a masterpiece and easily the best and most stylish 3D game they’ve delivered. 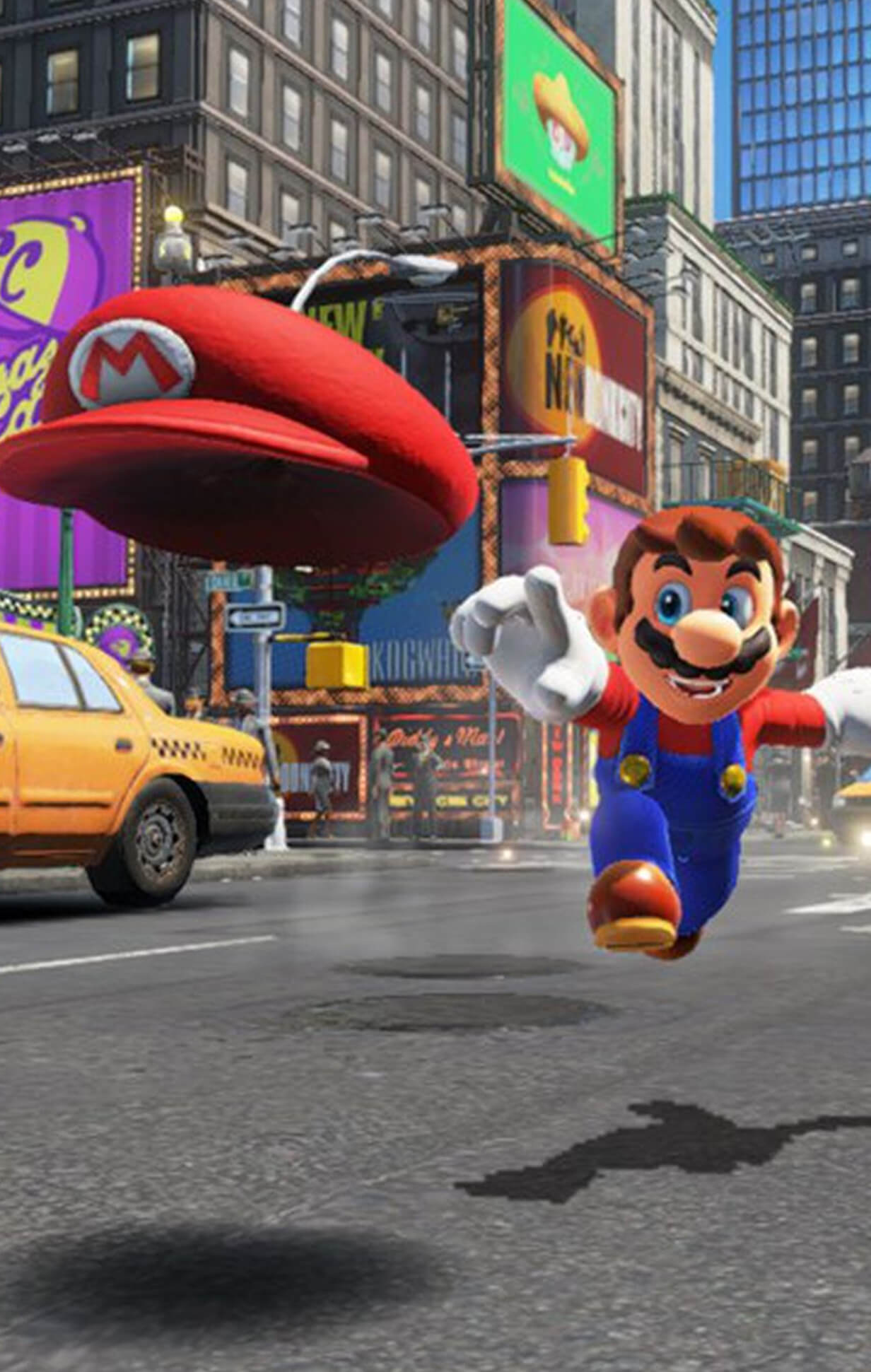 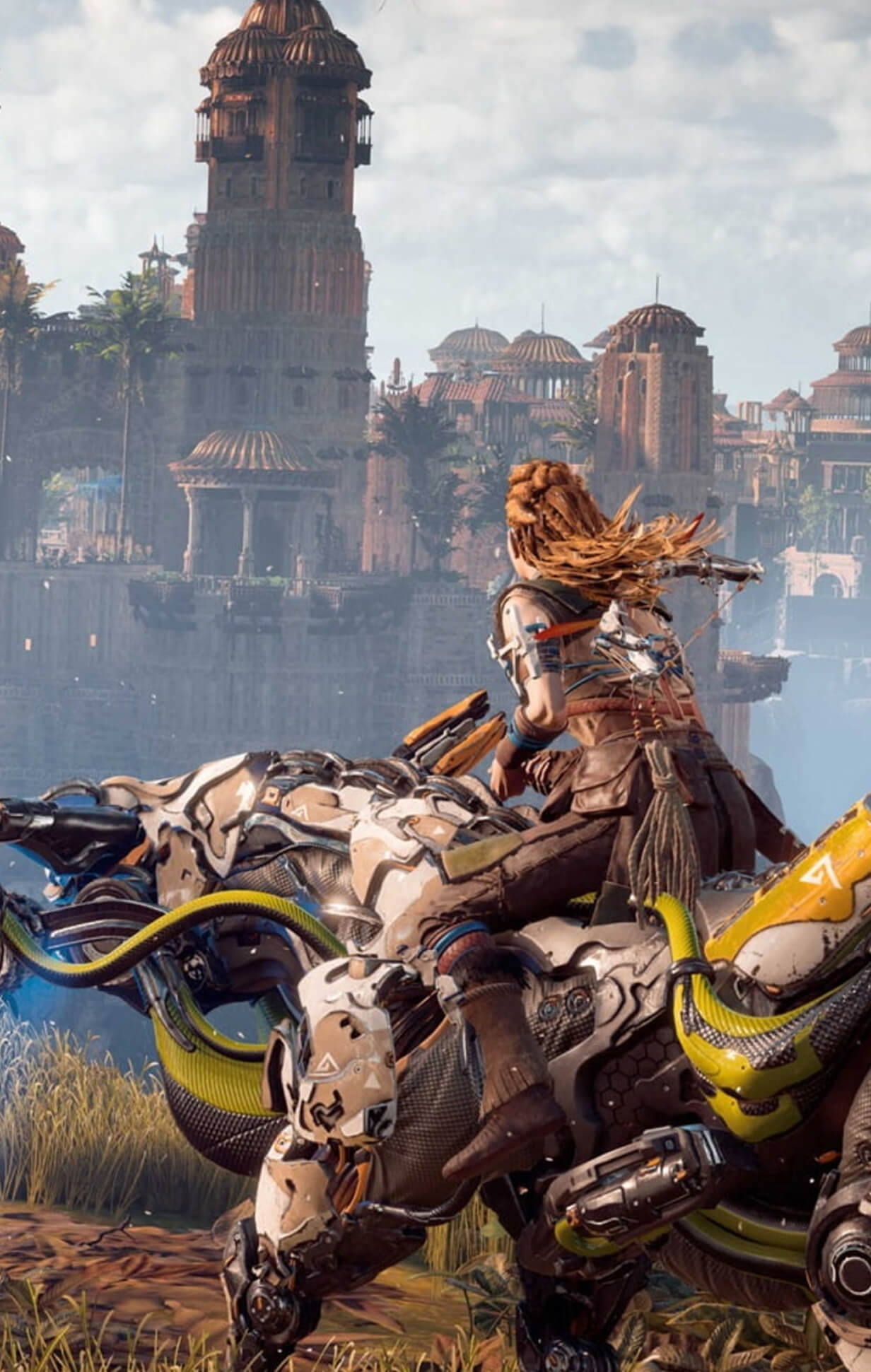 This fascinating RPG, from developers Guerrilla Games, follows Aloy, on a journey to learn the truth about her mysterious origin.

In the 31st century, large robotic creatures, known as "machines", dominate the Earth, as humans live in tribal-like populations. In this story, the focus is on the Nora, Carja, and the Oseram tribes. Although the machines are sometimes hunted for parts, they initially coexist, until deadly machines start to become more aggressive.

After being cast out of the Nora tribe, an outcast named Rost took Aloy and raised her. After acquiring an AR device as a child, Aloy used it to become more perceptive and as she got older, became determined to re-enter the tribe. Despite becoming a Nora Brave, Rost sacrifices himself to save her, when cultists attack them. The cultists, called the Eclipse, gain control of corrupted machines. Her resemblance to an Old World scientist named Dr. Sobeck is the reason they tried to kill her. After speaking to Faro Automated Solutions, Aloy discovers that they lost control of its military robots 1,000 years ago. After stripping Earth of all life, a top-secret project, spearheaded by Dr. Sobeck, called Project Zero Dawn, was launched. The plan was to shut the robots down, using an automated terraforming system. Aloy gets further help to discover what happened to the "Old Ones", leading her to the Citadel, a launch base and the centre of Eclipse power. GAIA, an AI computer, once controlled Zero Dawn and planned to restore the Earth's biosphere by deactivating all of the Faro robots to build new ones. A system designed to teach the new humans, called APOLLO, was sabotaged by Faro. After escaping capture, Aloy helps the Nora tribe fight off the Eclipse.

At Nora Mountain, Aloy discovers she is a clone of Dr. Sobeck and part of GAIA’s plan to restore its functions. Aloy kills the leader of the Eclipse before finally destroying HADES, a subsystem of GAIA. Soon she is able to switch the master override, finally ending the war.

Horizon Zero Dawn offers a complex story, mixed with exciting character development. The combat is immense, as you face off with the colossal machines, you must decide whether to tactically outwit them or use brute force. Alongside the mysterious and terrifying landscape, its gameplay is compelling and extremely satisfying.

Set during the 8th century, a warrior Senua travels from Orkney in the Scottish isles to the border of Helheim, the Norse underworld in a quest to save the soul of her dead lover Dillion from goddess Hela. She carries Dillion's severed head with her to use as a vessel for his soul.

Senua believes that she suffers from a curse, hearing voices in her head, who comment on her actions and thoughts from every angle. She is also guided by the memories of her friend and mentor Druth.

Throughout her journey, deeper into Helheim, she experiences hallucinations that reveal her mother suffered from the same curse, and her abusive devoutly religious father burned her alive because of it. Her father isolates her from the world, until she meets Dillion, the two fall in love and run to his village. However, after a plague hits Dillion's village, Senua blames herself for bringing her curse there and self-exiles. When she returns a year later, she found that they had all been killed by Norsemen, including Dillion.

In her ultimate fight, Senua realises that the dark forces are a representation of her father’s abuse, and frees herself of it. Before succumbing to death, she recalls Dillion telling her the importance of acceptance of loss. The imagery of Helheim falls away and Senua is standing with dead Hela in the place of her body. Freeing herself of the darkness and accepting the voices as part of her.

The game is really more about mental illness and psychosis, as the developers worked with experts to properly capture the experience of psychosis and the effects on the mind. It’s a fascinating and immersive experience that everyone should try for themselves. 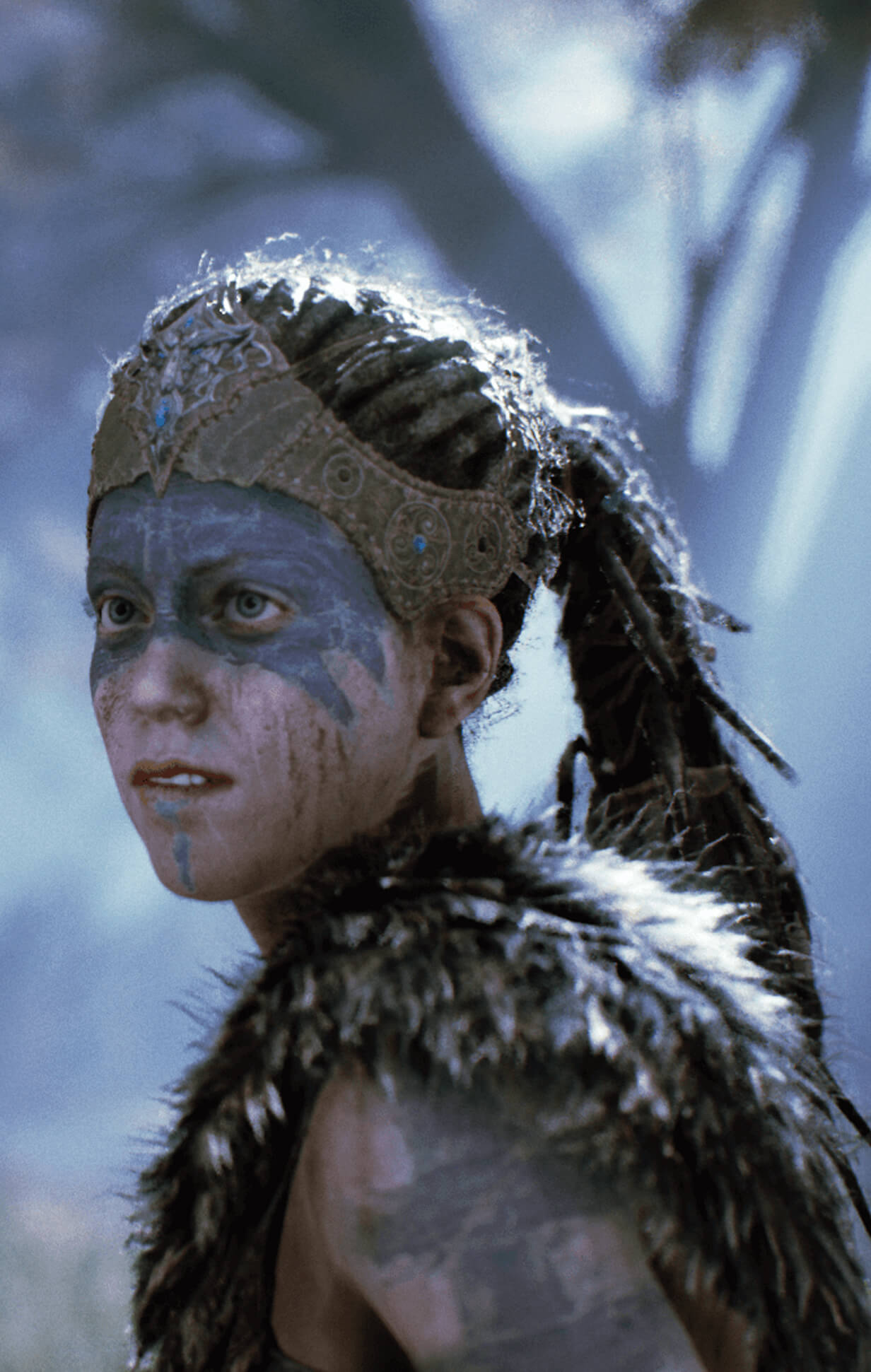 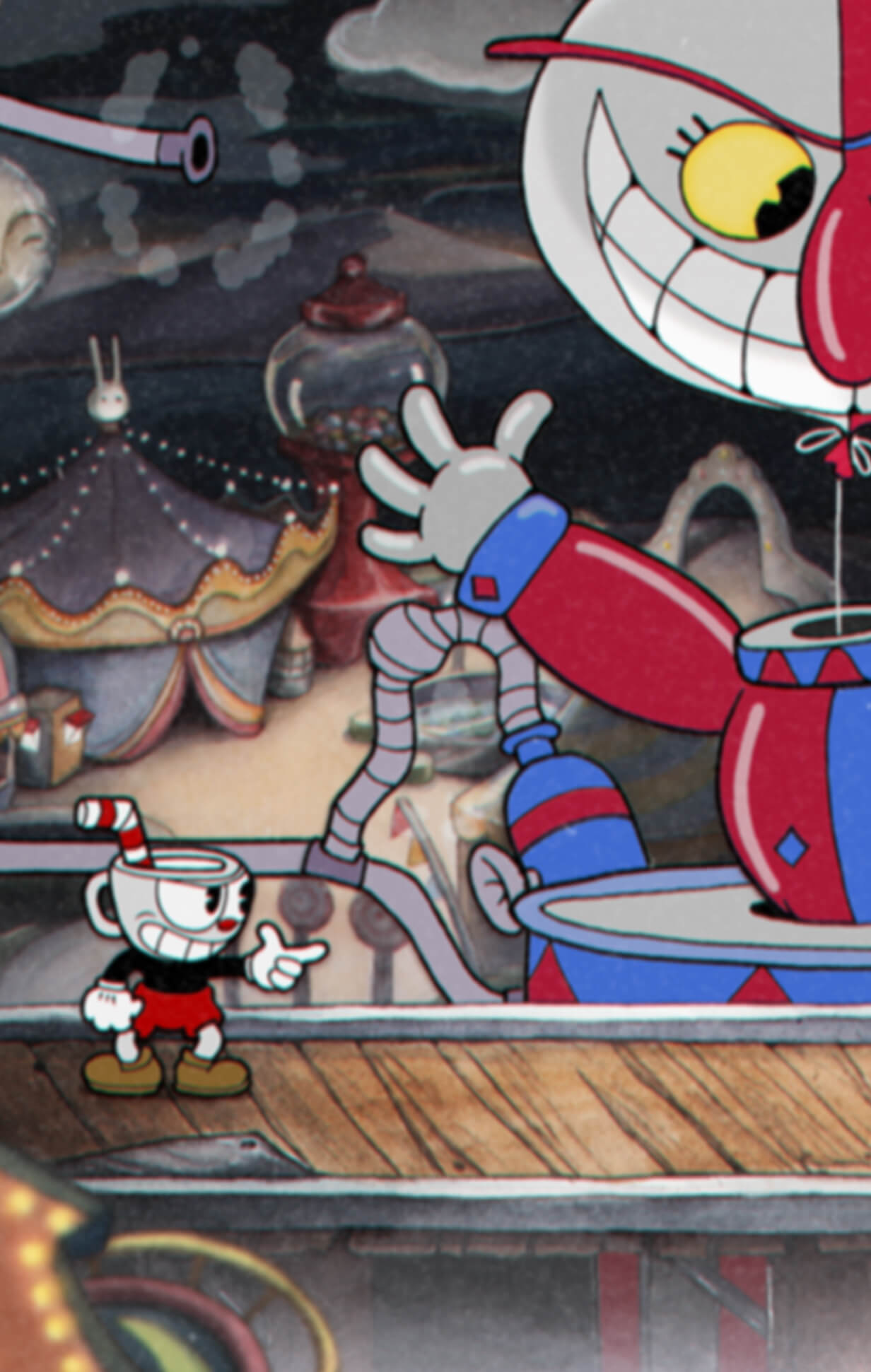 What do you get when you mix a 1930s Disney cartoon aesthetic and run-and-gun action? You get one of the most wickedly difficult games of the generation from Studio MDHR.

Cuphead and his brother Mugman are on a winning streak in the Devil’s Casino. The Devil himself raises the stakes, in one roll they can win all the money in the casino, if they lose the Devil will take their souls. Subsequently losing, the pair beg the Devil for mercy. He offers them a deal to collect the souls of all of his runaway soul debtors, in return for theirs.

As you collect souls, through a mixture of tricky stages and boss battles, Cuphead and Mugman return to the casino to face the Devil himself.

There’s nothing quite like Cuphead, the frantic action, mixed with the jazz inspired soundtrack and cute visuals really make this a special experience.