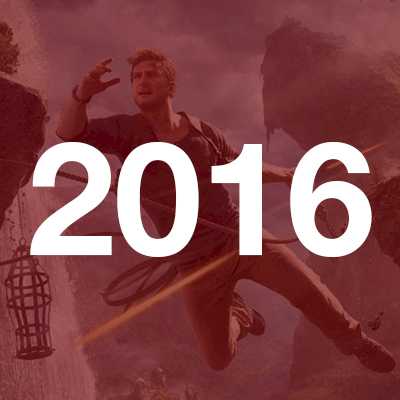 Exploring our favourite video games from the year 2016

This blog series is all about the best games of the last 20 years. George and Matt from the Monitor Audio team take a look at each year and pick their favourites. In this post, we’ll be going back to the year 2016.

2016 ushered in a new age for video game consoles, the mid-cycle update introducing higher visual fidelity with the PS4 Pro and Xbox One X. It also introduced the addictive and initially chaotic game Pokémon Go. 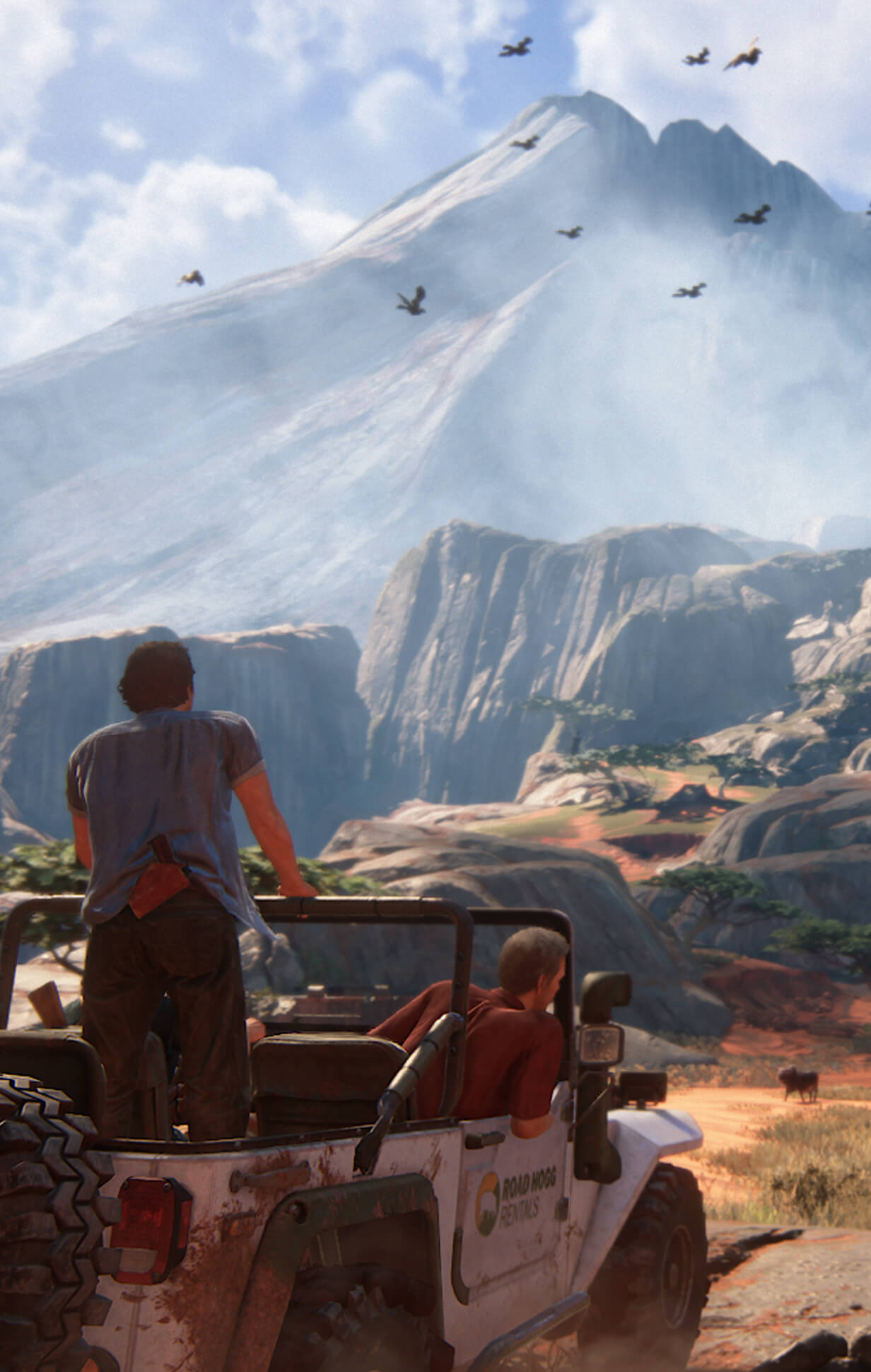 The fourth in the series and the last to feature Nathan Drake in the lead role, developers Naughty Dog provided us with a fitting ending.

A flashback shows a young Nate and older brother Sam searching for the fortune from the 1695 Gunsway heist, stolen by Henry Avery, a famous English pirate. Alongside treasure hunter Rafe, they discover a hollow St. Dismas idol in the cell of a Panamanian jail. Soon they are involved in a frantic escape, after Rafe kills a prison warden. As Nate and Rafe escape, Sam is left behind, after being shot by guards and presumed dead.

Years after Drake’s Deception, Sam surprises Nate, who explains he was incarcerated, until escaping with drug lord Hector Alcazar. In exchange Hector demands Avery’s treasure, so with Sully’s help, they travel to Italy to steal a duplicate Dismas idol. This brings them to the attention of mercenary boss Nadine Ross, who Rafe works alongside. After a map takes them to the Scottish Highlands, they discover a further map highlighting King's Bay in Madagascar. Further clues lead them to a fabled pirate utopia called Libertalia. When Elena learns that Nate isn’t on a salvaging job, she confronts him and leaves. After discovering Libertalia, the treasure is thought to be in a well-fortified town. After Rafe reveals that Sam lied to Nate, a scuffle leads to Nate falling off a cliff. After Elena helps Nate, a flashback reveals that their mother had a keen interest in Libertalia. After rescuing Sam, they find Avery's treasure-laden ship. Rafe bribes Nadine’s men to look for more treasure, but triggers a trap, setting off a fire. Nadine leaves them all to burn, but Nate and Sam make it out, escaping on Sully’s plane.

Back home, Sam and Sully team up as Nate and Elena become successful salvagers and soon start a family. Years later, Nate decides to tell their incredible story to their teenage daughter Cassie.

Naughty Dog offered an engaging world, exquisite craftsmanship, superb set pieces and a wonderful story. The multiplayer modes were a lot of fun and although I enjoyed playing Crash Bandicoot at the end of the main campaign, it’s a shame this incredible series has ended. With its outrageous action choreography, A Thief’s End is a masterpiece.

In their debut game release, independent developer Campo Santo brings us a meandering adventure game with a gripping story.

Following the Yellowstone fires of 1988, Henry takes a job as a fire lookout at a national park after his wife develops early-onset dementia. During his first day, he is contacted by Delilah, another lookout in another watch tower on the other side of the park. Through the walkie-talkie, she asks him to investigate illegal fireworks by the lake, where he discovers a couple of teenage girls who accuse him of leering. On his way back to the tower, Henry discovers a locked cave and sees a shadowy figure watching him in the distance. He returns to the tower to find it has been ransacked. After finding a communication line cut, supposedly by the teenagers, Henry and Delilah come up with a plan to scare them off. However, they find the teenagers camp ransacked and missing. Henry finds a disposable camera belonging to a boy named Brian, Delilah explains that he is the son of Ned, a former lookout who abruptly left with his son and never returned.

Two months later, a small wildfire breaks out near his tower. Two weeks later, when Henry discovers a radio and clipboard with details of his and Delilah’s conversations over their walkie-talkies, he is knocked unconscious and someone takes the items. Henry then comes across a government research facility with more transcripts of their conversations and discovers a tracking device. Following the tracking device, he finds a backpack with the cave entrance key inside. He enters the cave, but is locked in by an unseen figure. Exploring the cave, Henry finds the remains of Brian’s body before escaping.

The wildfire previously spotted gets out of control and the lookouts are told to evacuate. Henry follows the tracking device again and discovers a tape from Ned claiming that Brian’s death was accidental and chose to secretly live in the area instead of returning home. Ned used the radio equipment to prevent people looking for him, and tried to scare Henry away using the transcripts. Going to the Delilah’s tower, Henry and Delilah share their goodbyes on the walkie-talkies before Henry is evacuated.

With an incredibly rich story, great art design and soundtrack, Firewatch remains one of the best independent games produced. 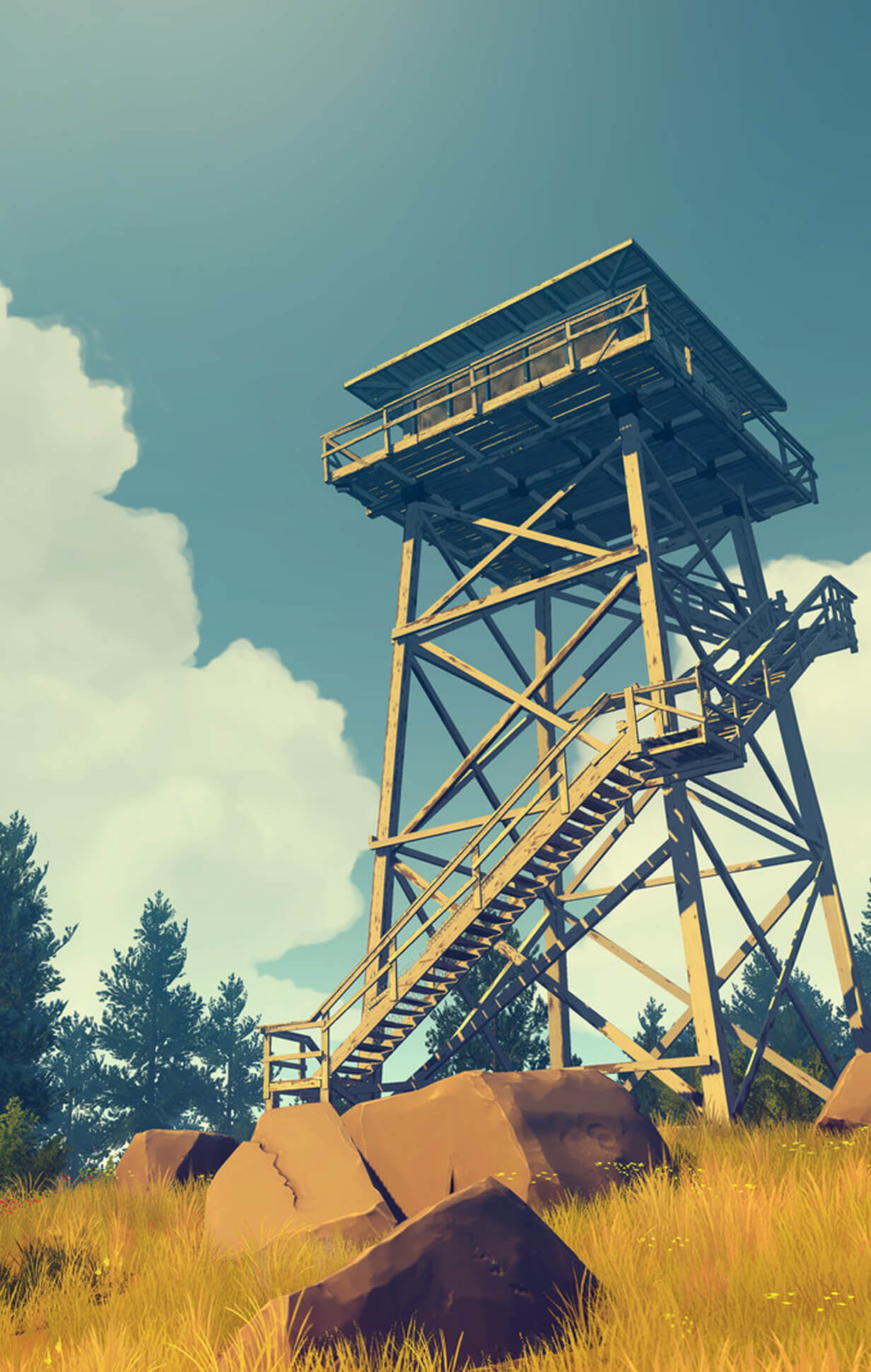 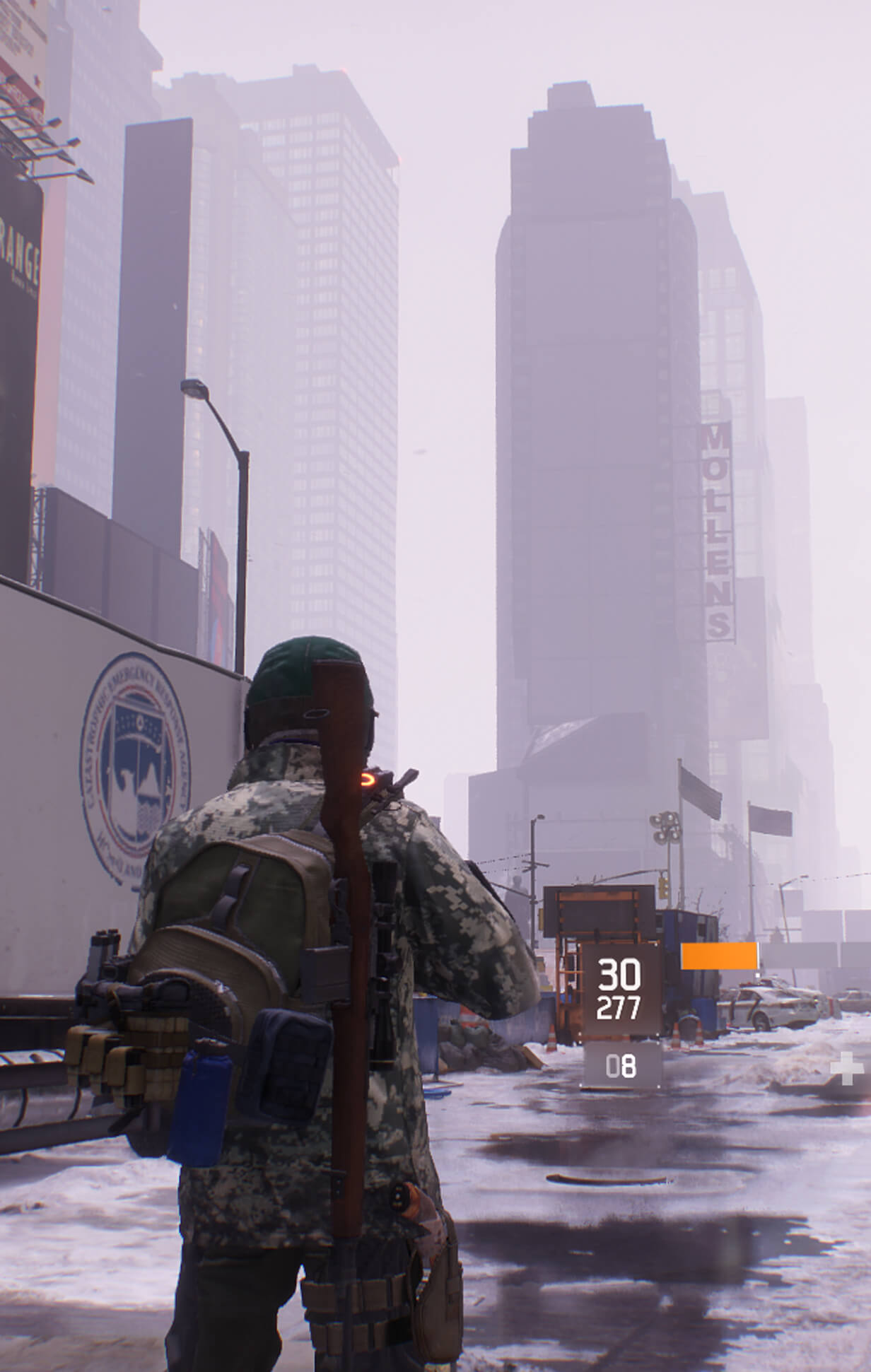 After a viral epidemic, transmitted by a virus planted on banknotes sweeps through New York City in 2015, widespread chaos ensues. As major cities are placed under quarantine, you play as a sleeper agent, sent in by the U.S. Government to restore order.

As part of The Division, you assist National Guardsmen and the Joint Task Force to make their way to the quarantine zone. After a mysterious rogue agent leads a revolt and attacks them at every corner, eventually Division agents claim a Post Office building, making it their base of operations. You are given multiple assignments across New York City, to bring these rogue agents and their followers down. Alongside rioters, criminal groups such as escapees from Rikers Island and insane New York Sanitation workers, who believe everyone is infected, cause chaos. As you restore the base back to full working capacity, you must rescue important personnel across the city, recovering a sample of Green Poison along the way. Dr. Gordon Amherst is found to be the man behind the manufactured virus. After footage of former Division agent Aaron Keener is found, proving he has gone rogue, they make him the main target. You are tasked with bringing in a Russian virologist who claims to have information on the Green Poison, by the name of Vitaly Tchernenko. However, Keener captures him and takes him as prisoner, as you take down LMB head Charles Bliss. New York becomes stable again, but when the Division find Dr. Amherst's remains, they realise that Keener has technology to manufacture a new strain of Green Poison. A message leads you to the “Dark Zone” in the centre of Manhattan.

You soon discover that Amherst engineered Green Poison as part of his plan to decimate the human race and preserve the planet. As Keener plans to continue with Amherst's plot, he questions your motives and asks whether you are fighting for the right side, before slipping away.

Despite the repetition, the authentic and gritty Manhattan streets kept me engaged. Although it’s an online game, I was still able to play the campaign mode, which was immensely fun, without PvP or co-op. Those online elements were a welcome break in this lively RPG from Ubisoft.

On a fictionalized Earth, humans developed robots called “Omnics”, with artificial intelligence. They were built to achieve economic equality and initially were treated as people, until they got into the wrong hands.

When the "omnium" facilities manufacturing the robots started producing a series of hostile robots, they began to attack and the "Omnic Crisis” began. Programs were launched all over the world to combat the robots with elite fighters deployed, but when those efforts failed, the UN formed an international task force called Overwatch. This combined individual efforts to push the hostile robots back and eventually restore order. Two veteran soldiers were put in charge, as Gabriel Reyes took charge of Overwatch, Jack Morrison oversaw Blackwatch, its covert operations division. During the next few years, Overwatch maintained peace, despite the Talon organisation attempting to start a second Omnic Crisis, although a rift began to escalate between Morrison and Reyes. Soon the UN investigated allegations of wrongdoing within the organisation, as tensions rose. In Switzerland, at the Overwatch's headquarters, an explosion took the lives of many of its members and appeared to kill both Morrison and Reyes. The UN then dismantled Overwatch under suspicious circumstances.

Six years after the UN’s actions, there are signs of a second Omnic Crisis occurring in Russia, after witnessing terrorist acts all over the world. Overwatch defies the UN and reforms, recruiting older members. Soon it's revealed Morrison and Reyes survived the explosion. Whilst Morrison investigates the UN’s decision to shut Overwatch, Reyes joined Talon. As Morrison becomes Soldier: 76, Reyes becomes Death.

Your first job is to pick the perfect character. With many different abilities, finding the right hero can be tricky, but a lot of fun trialling them and discovering their captivating backstories. Whether you are a tactical genius, painstakingly switching characters to destroy the opposition, or just want a quick session with friends, Overwatch delivers a fast-paced experience like no other. With many different game modes to enjoy across some wonderfully crafted maps, Overwatch is a blast. 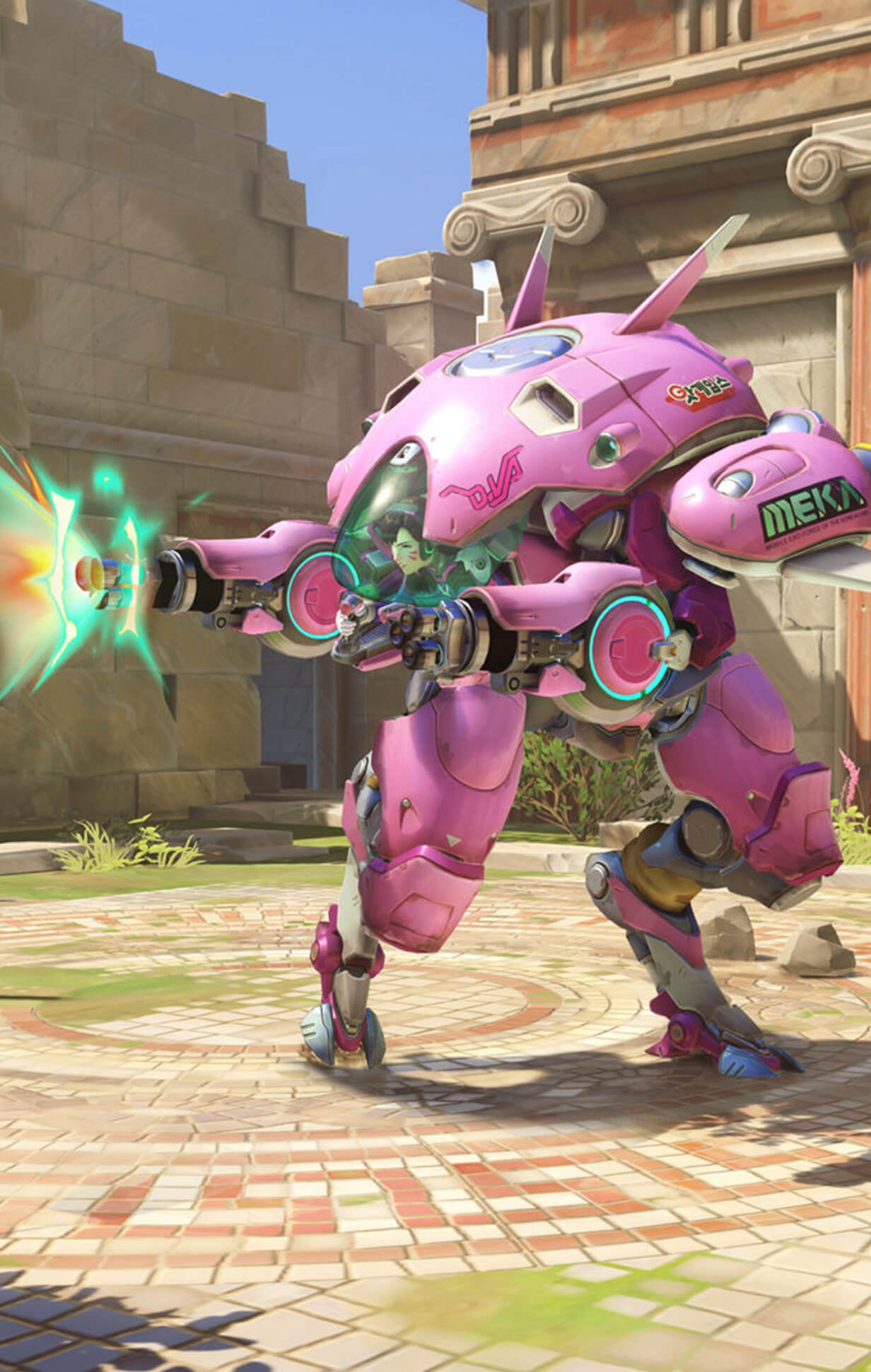 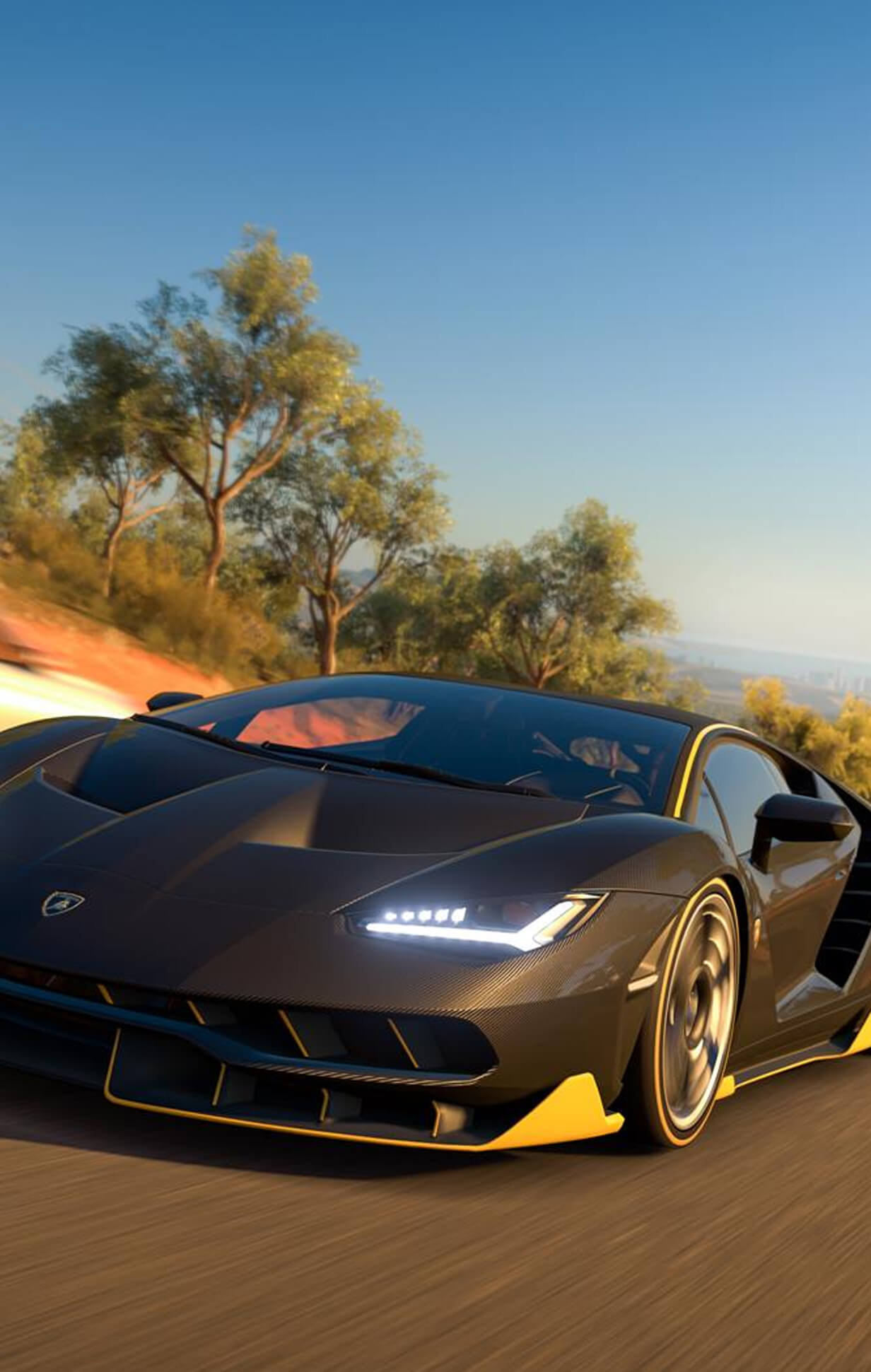 In a solid leap forward for the series, Playground Games took the amazing supercar gameplay and plopped it into a rich open world experience.

Taking place in a fictionalised Australia, taking players through lush forest, city centres and the dusty outback in licenced cars, from many big names, such as Porsche, Lamborghini, BMW, Ford and many more.

Players are free to drive around the open world, where they come across races, time trials and a variety of challenges.

Whether you’re going in for a quick race or competing with others around the world, Forza Horizon 3 provides an immersive driving experience with gorgeous graphics.