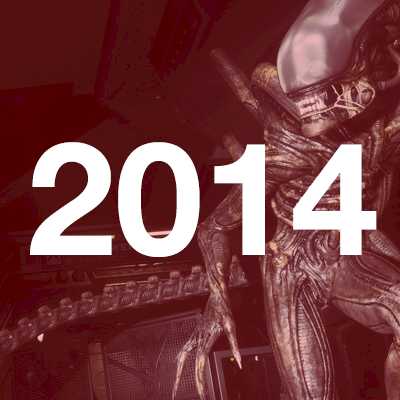 Exploring our favourite video games from the year 2014

This blog series is all about the best games of the last 20 years. George and Matt from the Monitor Audio team take a look at each year and pick their favourites. In this post, we’ll be going back to the year 2014.

In a bit of a slow year for the world of video games, the long awaited Destiny, by developer Bungie, was hit by a lack-lustre reception, the brilliant Bayonetta received a sequel but was locked to the poorly performing Wii U and we saw an all-new Mario Kart with HD graphics. 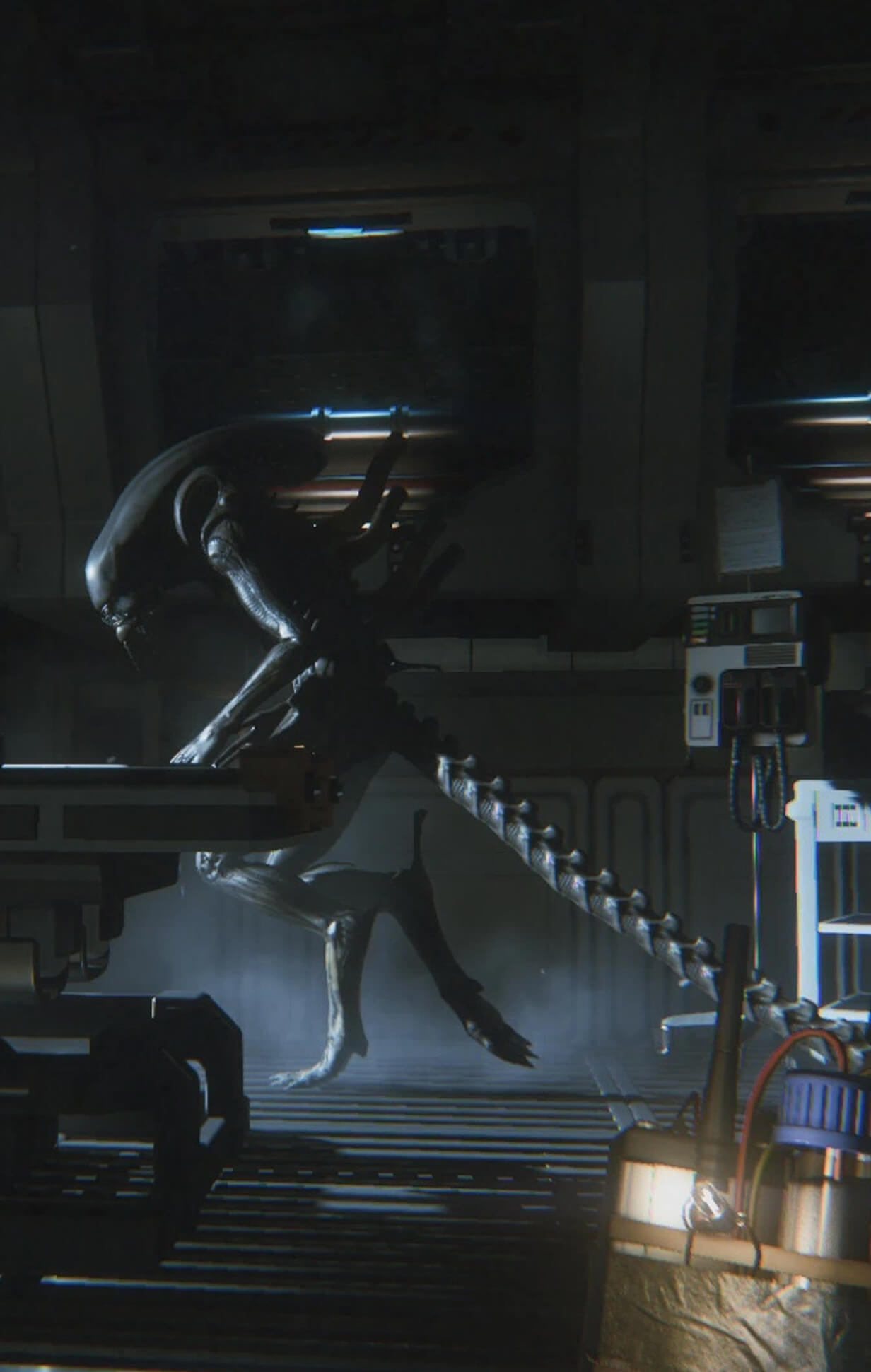 Set in 2137, salvage ship Anesidora comes across Ellen Ripley’s ship, the Nostromo, where the flight recorder is retrieved. Ellen’s daughter Amanda learns that its being kept on a Seegson Corporation space station called Sevastopol. A Weyland-Yutani android by the name of Christopher offers Amanda the chance for closure, by giving her a place on the retrieval team with Weyland-Yutani executive Nina Taylor.

They take a courier ship heading to Sevastopol, but find it to be damaged on arrival. As Amanda enters the station, she locates the flight recorder, which is corrupted. Soon she is aware of an Alien on board. Upon notifying Waits and Ricardo, the stations security, they confirm that Marlow, Anesidora’s captain, brought the Alien to Sevastopol. Whilst navigating the Nostromo’s path, they found a derelict ship, containing a nest of alien eggs. Marlow’s wife died after a Chestburster hatched from her, following an attack by a Facehugger. Amanda boards the ship, planning to eject the Alien into space, but she fails to leave the module in time, causing her to orbit KG-348 with the Alien. Using a space suit, she makes her way back to the station, but finds that service androids have slaughtered the crew. APOLLO, the station's artificial intelligence, kills Christopher. Amanda takes the path into APOLLO's control core, finding evidence that Weyland-Yutani had instructed APOLLO to keep the Alien safe, by sending Taylor.

She finally listens to her mother’s final report as Taylor is killed trying to stop Marlow from destroying Sevastopol. Aboard the courier ship, Amanda ejects both her and the Alien into space.

The atmosphere of the original Aliens film was captured perfectly, as you navigate the many corridors, vents, and tunnels, in eerie silence, whilst avoiding androids and Aliens. The claustrophobic environment was like nothing I had previously experienced, with an emphasis on stealth rather than all out assault. A terrifying and brilliant game!

This chaotic open world platformer and shooter marked PlayStation veteran Insomniac Games’ first and only release for the Xbox One.

Taking place in a colourful dystopian Sunset City in the year 2027, a large corporation FizzCo launches a new energy drink that causes the citizens to turn into gooey mutants. In order to cover up the incident, FizzCo claims a viral outbreak had occurred and quarantines the whole city.

The player, who works as a FizzCo sanitation employee at the launch party, doesn’t drink the new product and watches the chaos unfold as he is saved from a mutant by Walter, a fellow survivor. The player learns that Walter is creating a plane to escape the quarantined city, but needs help to create a propeller. The player stumbles across Sam and the Oxfords, a group of rich but lazy geniuses hiding out in an old arcade. After performing tasks for the group, they agree to help Walter. However when the plane takes off, Walter notices an invisible wall around the city, pushing the player out of the plane before crashing into the wall.

Not deterred by the failed escape attempt, the player aids a group of scouts who have taken refuge in a samurai museum and helps a group of board gamers. They build a boat out of garbage to avoid detection from the FizzCo robots. As the player is about to escape, they learn of FizzCo’s plans to eliminate any survivors, so there are no witnesses.

Sam tells the player of a superweapon in the FizzCo headquarters, which the player is helped to break into by the various factions they’ve met across the city. After destroying the robot that was programmed to destroy the city, the other survivors celebrate. However, the FizzCo HQ robots automatically activate a protocol, sending helicopters full of the energy drink around the world.

With fun combat, witty dialogue and great music, Sunset Overdrive is the most fun end of the world story you’ll ever play. 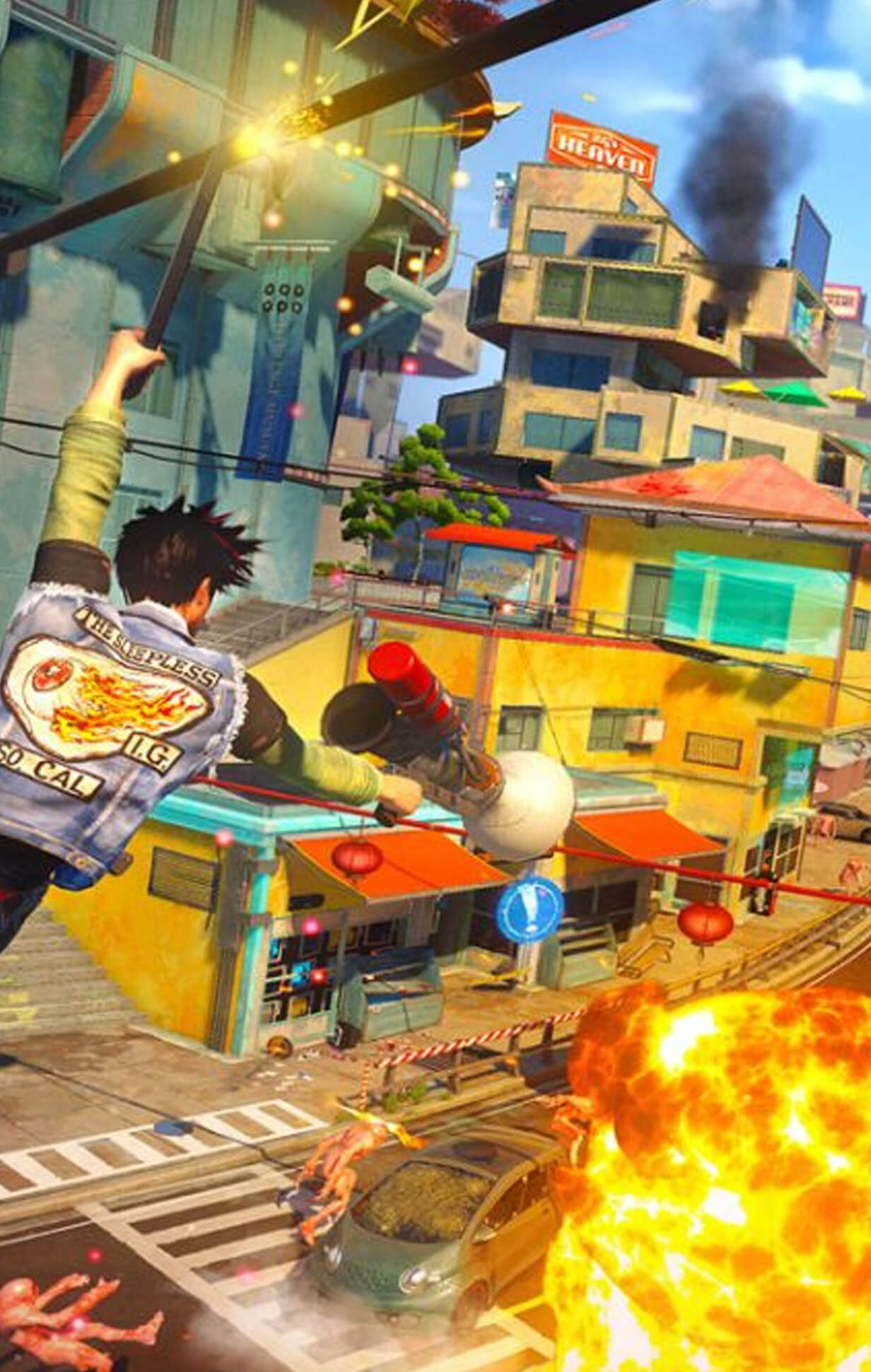 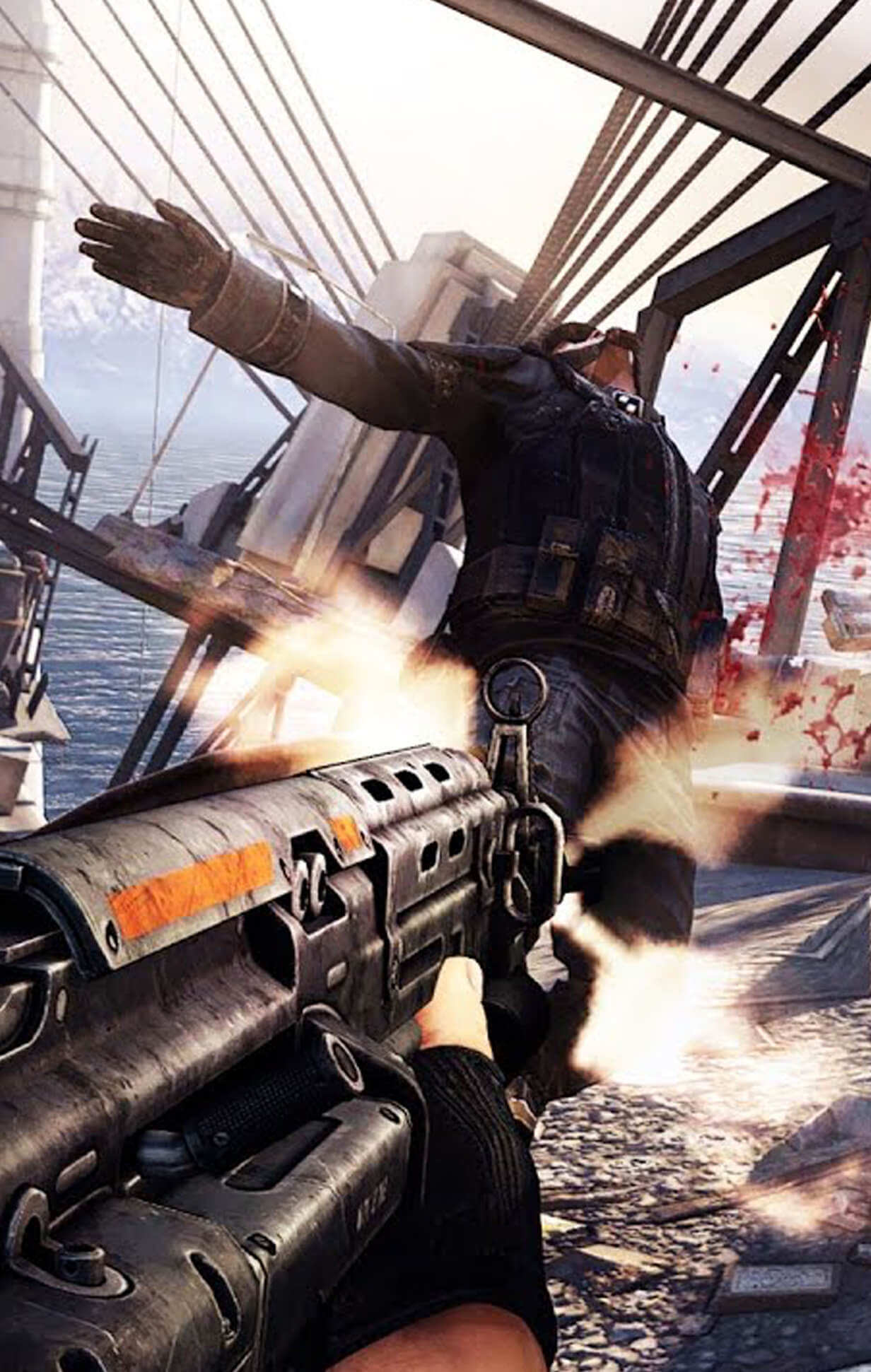 The first Wolfenstein to be developed by MachineGames, the Nazis have won the Second World War, as you aim to stop their dominance.

Set in 1946, you play as veteran William Blazkowicz, taking part in an Allied raid against a weapons laboratory. As you and your team, consisting of pilot Reid and Private Wyatt, are captured, you are taken to an experimentation laboratory. There, Nazi leader Wilhelm Strasse forces Blazkowicz to kill Reid, before Strasse leaves Blazkowicz to die in an incinerator. Despite escaping, Blazkowicz’s head injury forces him into a coma, which he stays in for the next fourteen years.

After the Nazis order the asylum to shut, Blazkowicz wakes and escapes with nurse Anya. He discovers its now 1960 and years prior, the US surrendered. Blazkowicz learns that members of the Resistance are imprisoned in Berlin. Blazkowicz makes his way there with Anya, breaking into a prison to rescue Wyatt. Blazkowicz learns that Caroline Becker has revived the Kreisau Circle, a resistance movement against Hitler’s Nazi regime. Soon an attack on a Nazi research facility takes place, as they steal secret documents and prototype stealth helicopters. After discovering they are manufacturing energy weapons, Blazkowicz goes undercover in a labour camp, finding that they are mass-producing robots with artificial intelligence. Blazkowicz rescues the prisoners and destroys the camp using their robots. Next Blazkowicz finds a cannon designed to fire nuclear warheads on their submarine fleet. He travels to their Lunar Base to acquire the access codes, but returning to the Resistance base, he discovers Strasse has captured some of its members.

After assaulting their compound, the prisoners escape. A confrontation with Strasse leads to Blazkowicz destroying a robotic version of Reid, before defeating Strasse. A severely injured Blazkowicz tells the Resistance to fire the nuclear cannon, sacrificing himself in the process.

This fresh first-person shooter from Bethesda presented an alternative look at the Second World War, with an interesting journey for its protagonist. Despite all the usual elements of a shooter, I was more emotionally invested with this campaign than many others. With its superb writing and real attention to detail, New Order was a blast!

Taking a hiatus from the Halo series, developers Bungie introduced Destiny, an online first-person shooter, set 700 years in the future.

You play as Guardian, as your robotic companion named Ghost, finds you in the wasteland of Old Russia, reviving you after being killed in battle. After travelling to the Tower on Earth, they are briefed on The Darkness, a mysterious enemy who was the cause of the Collapse, the cataclysmic event that ended humanity's Golden Age.

The Speaker sends Guardian to the Cosmodrome, where he finds Rasputin, an AI built to defend Earth. Rasputin is still active and controlling the Array, which connects long-lost colonies throughout the Solar System. Upon searching the Moon, you find another Guardian who had been killed by The Hive, an ancient race who serve the Darkness and are now planning to raise an army and invade Earth. After destroying the Sword of Crota and severing their long-distance communications, Guardian travels to Venus to face a new enemy, the Vex. Guardian sets out for the Black Garden, a city where the Vex are born, but first brings the head of a Vex Gate Lord to the Queen of the Reef. You travel to Meridian Bay on Mars and become the first to penetrate the Exclusion Zone. At the Garden's Spire, Guardian provides the Gate Lord's eye in exchange for entrance to the Black Garden. You then discover that the Vex are now on Mars, ready to return to their home, the Black Garden. After battling the Vex in the Black Garden, the Guardian defeats the three Sol Progeny. As the heart is destroyed, the shroud of Darkness is lifted from the Traveller back on Earth, as the Guardian returns to Mars.

Many Guardians celebrate as the Speaker addresses them, but a mysterious woman, called the Exo Stranger, tells you that the fight isn’t over. The mysterious Vault of Glass described as the "Vex underworld” is investigated, leading to a realm where a Vex sub-race called Gorgons can control reality. After battling past The Templar and its Oracles, they reach Atheon, who has control over time, also defeating him.

For me, Bungie’s best game is still Halo: Combat Evolved, however, the absorbing character progression and seamless co-op play helped to make Destiny an engrossing game. 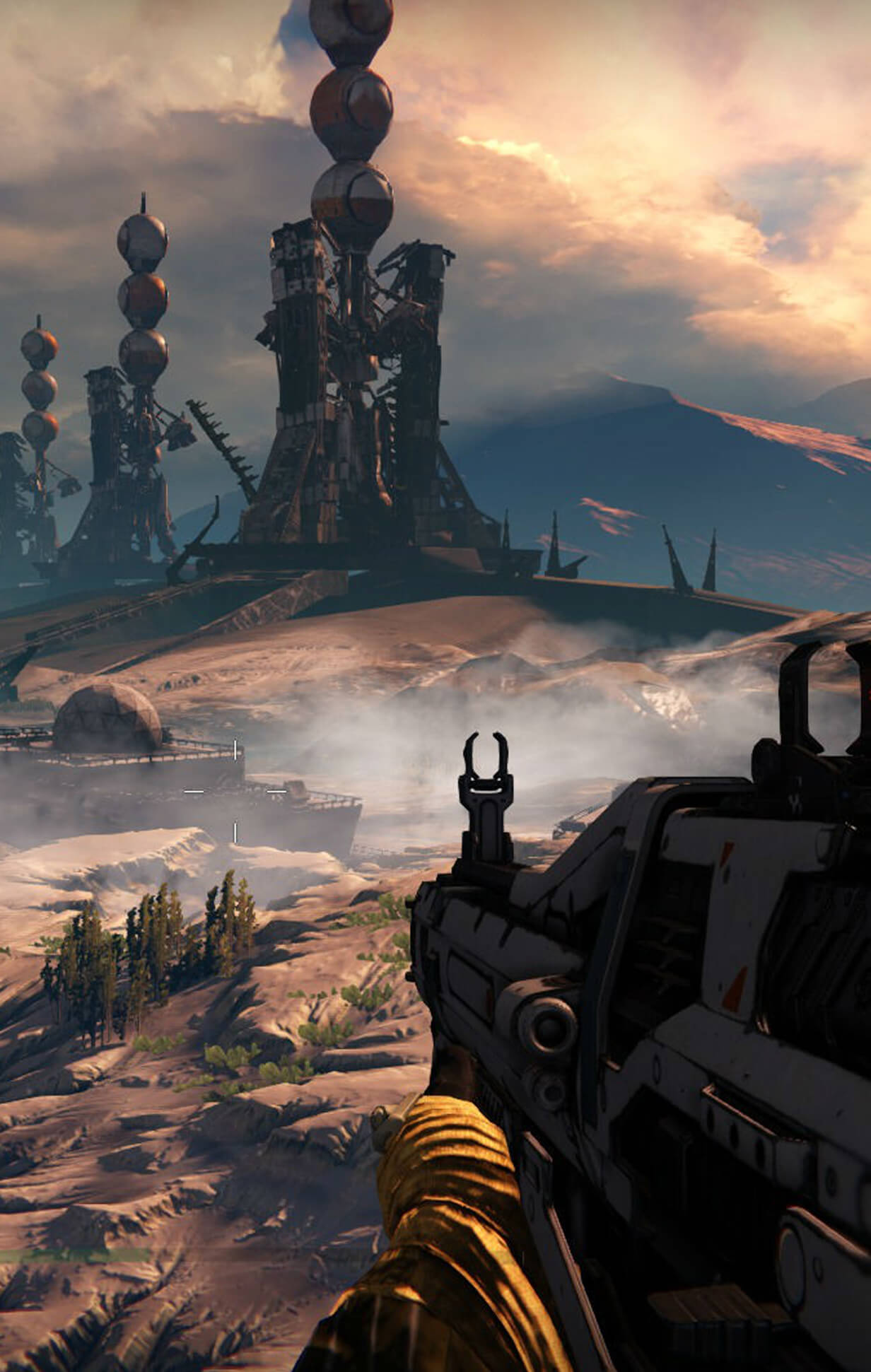 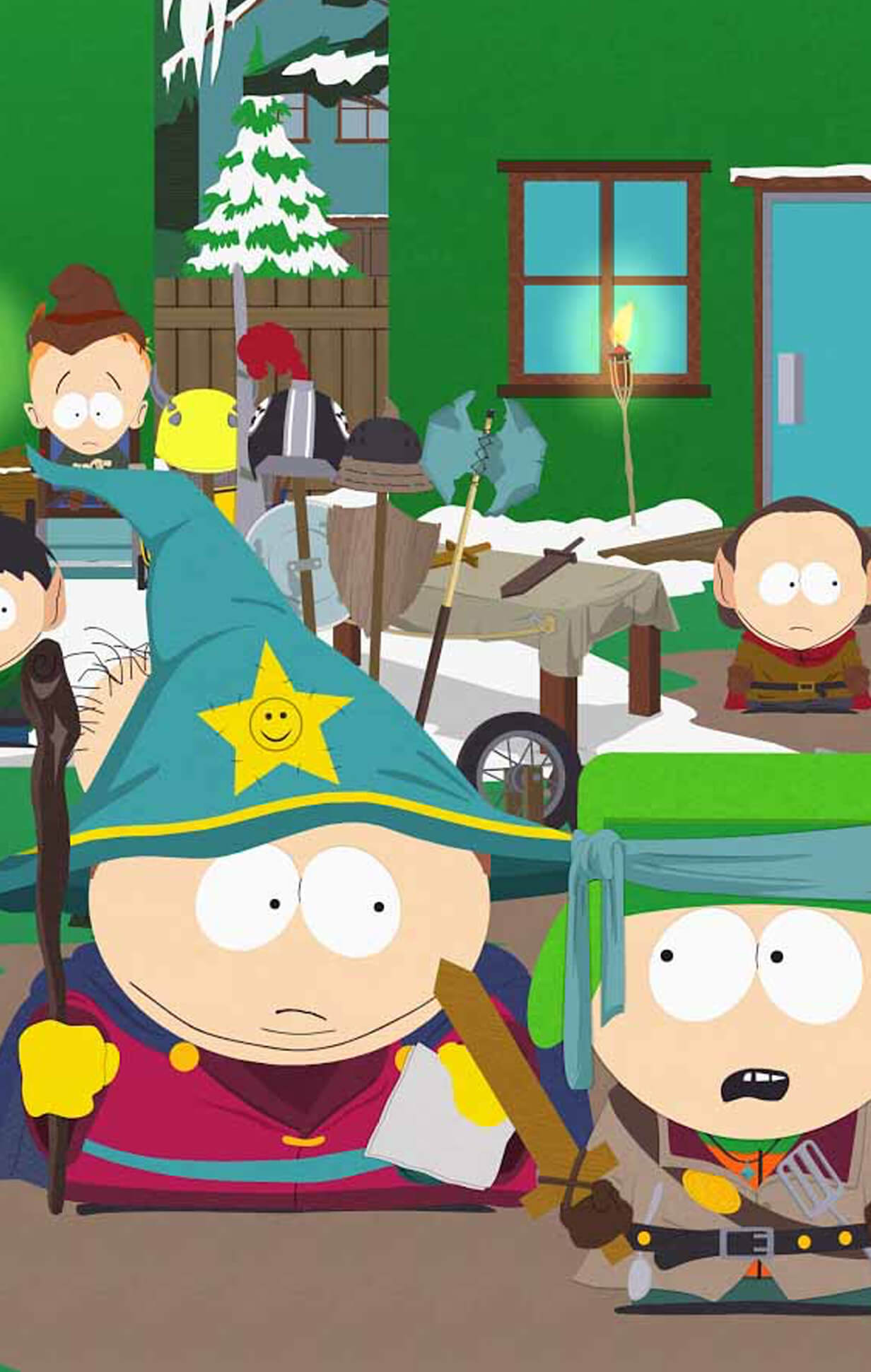 South Park: The Stick of Truth

This role-playing game from developers Obsidian Entertainment incorporated everything we loved about the provocative series.

To escape your past, you play as silent protagonist New Kid, as you move to the fictional town of South Park in the Colorado Rocky Mountains. Your new friends, Butters, Princess Kenny and Cartman, quickly make you aware of the greatly desired Stick of Truth, which is a twig that possesses limitless power.

After the elves attack and take the Stick, you soon become involved in an epic fantasy game featuring wizards and warriors battling for its control. After Clyde is banished, Cartman sends you out to retrieve the Stick from Jimmy, until aliens attack. As town residents are abducted, you escape, when the ship crashes into the town's mall. The government claim a Taco Bell is being built; in an attempt to deter people from believing it’s a crash site. Both Cartman and Kyle’s group again task you with retrieving the Stick. Soon government plans are leaked, as its discovered they are plotting to blow up the town in order to destroy alien goo released from the ship. Randy and the Goths help you escape from the site, as a virus is unleashed on South Park. As the goo starts to turn living creatures into Nazi Zombies, you have to side with Cartman or Kyle. Clyde uses the alien goo to create an army of Nazi Zombies, in revenge for being banished. After a battle with the Gnomes, you gain the ability to change size. An attack on Clyde's dark tower, by the Star Trek role-players, pirates and girls, alongside the humans and elves is still not enough. As you are tasked with disarming a nuclear device, set by the government, you must then defeat Nazi Zombie Chef, before Cartman finally kicks Clyde from the tower.

Princess Kenny infects himself with the virus, betraying everyone, but you defeat him, bringing peace to the town. The group decide to throw the Stick away, agreeing it’s too powerful for one person to hold.

This was a game I initially had mixed feelings about, but was soon hooked. With a significant amount of content, it made me fall in love with the series again. Full of farts, hysterical action sequences and aliens, Trey and Matt are still able to shock and make us laugh uncontrollably.