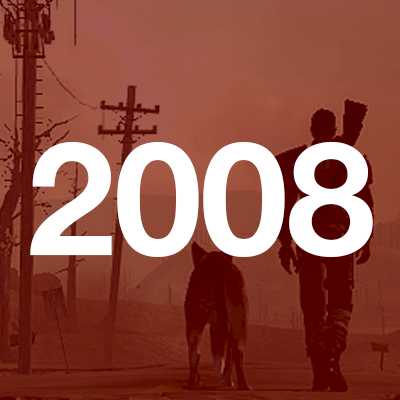 Exploring our favourite video games from the year 2008

This blog series is all about the best games of the last 20 years. George and Matt from the Monitor Audio team take a look at each year and pick their favourites. In this post, we’ll be going back to the year 2008.

Along with the usual sequels, 2008 saw an interesting range of brand new games and new play styles along with a slew of first person shooters. 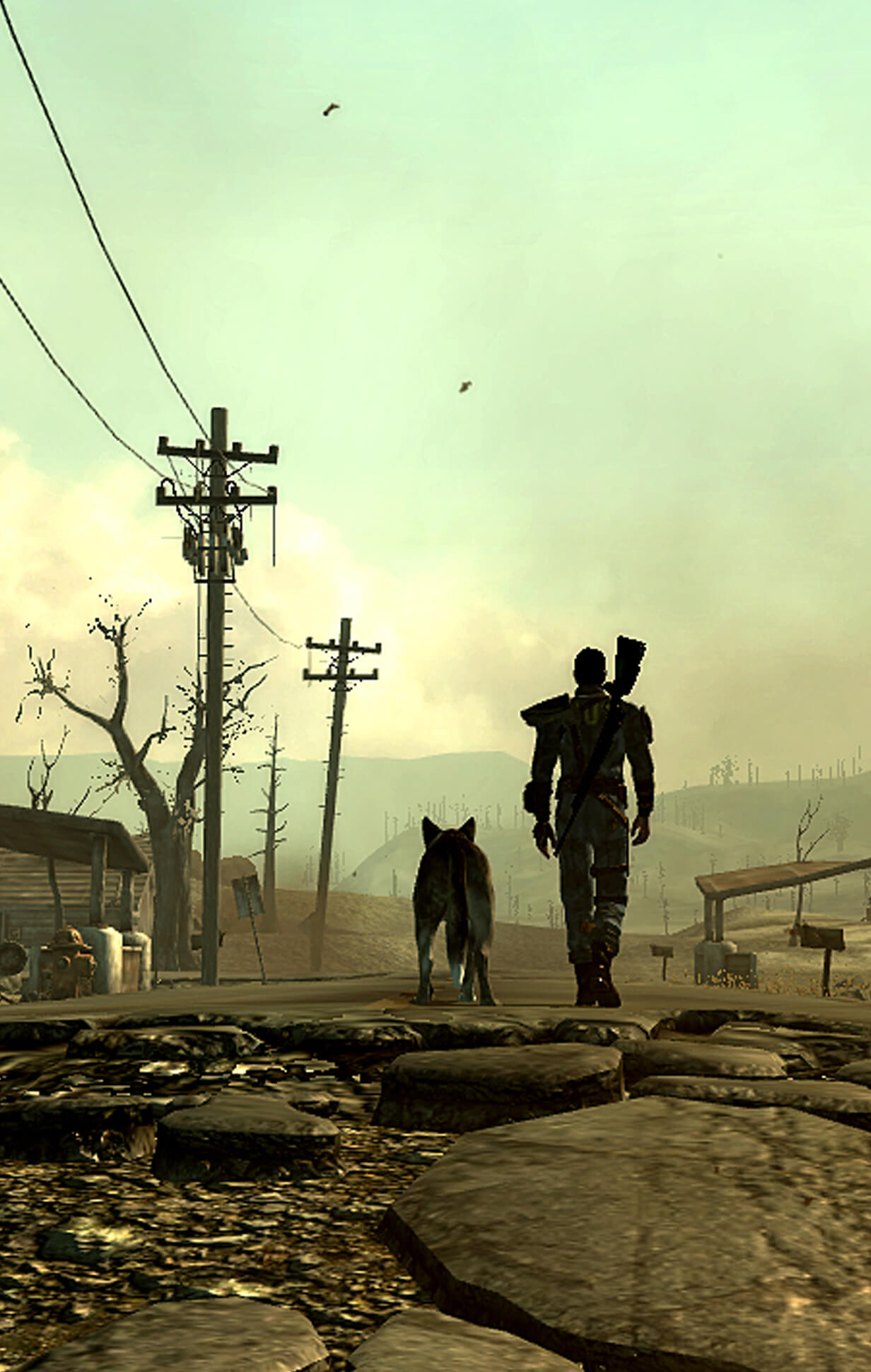 After political unrest over the remaining uranium and crude oil, tensions led to The Great War, a nuclear apocalypse in the year 2077. Underground shelters, called vaults, were utilised by thousands to protect themselves from the blast. The vaults were seen as a social experiment, built by Vault-Tec, after winning a government contract to protect the population. Taking place in the Capital Wasteland, in the year 2277, you control an inhabitant of Vault 101. On your nineteenth birthday, your father James, a scientist and doctor, abruptly leaves the vault and you begin your journey across the vast wasteland to find him.

The war-ravaged landscape leads you to the town of Megaton, which is home to an undetonated atomic bomb, before reaching the ruins of Washington D.C. After meeting Doctor Li, a scientist who worked alongside James, you first learn that your parents were not born in a vault, but instead took refuge there. His parents had to abandon plans to use a giant water purifier, built in the Jefferson Memorial, called Project Purity, to purify all the water in Tidal Basin and the Potomac River. After reuniting with your father, you help to recruit Li and continue the work, but the Enclave, a military organisation, led by Colonel Autumn thwarts testing. James gives his life and his last request is for you to acquire the Garden of Eden Creation Kit (GECK), which is essential to help rebuild civilisation. Soon, with help from the Brotherhood of Steel, a rival faction of the Enclave, you acquire GECK from another vault, but Colonel Autumn ambushes and steals it. After learning of their plans to poison the water source using Forced Evolutionary Virus (FEV), you make your way to the Brotherhood to notify them. The virus would effectively kill off all human life, with the exception of the Enclave. As the final assault on the Jefferson Memorial takes place, you find yourself in a position to decide the future of the human race.

With so much depth, lots to explore and hundreds of hours of gameplay from the side missions alone, the main story could be continued with the brilliant DLC. Karma plays its part, as the consequences of your actions are crucial to not only your characters development, but also everyone around you. As you survive feral humans, raiders and mutants, it’s the radiation you really have to keep an eye on.

Set in the year 2508, engineer Isaac Clark arrives at the Planet Aegis VII on a maintenance ship heading to the USG Ishimura, a mining ship that has sent out distress signals, Isaac received a video message from his girlfriend Nicole who was on the Ishimura before it stopped communications. When a docking malfunction crashes Isaac’s ship into the Ishimura, all of the crew on-board apart from Kendra and Hammond are killed by vicious creatures called Necromorphs. Isaac navigates the ship to restore it’s systems, but is haunted by hallucinations and paranoia as symptoms of psychosis escalate.

Learned through audio and video logs, Isaac finds out that Ishimura was performing illegal mining working for the ‘Church of Unitology’ tasked to find the ‘Red Marker’. The marker created a virus-like organism that triggered mass psychosis, killing people then reanimating their corpses, transforming them into the Necromorph monsters. It turns out that the Marker was a copy of an ancient alien artefact found on earth, and was left on the planet as an experiment which the government wanted retrieved. Kendra one of the survivors reveals that she was tasked with bringing the Marker back. After Isaac reunites with Nicole, he sabotages Kendra’s escape from the Ishimura, returning the Marker to the planet neutralising the Necromorphs.

Taking inspiration from space horror films and survival horror games, Dead Space delivers a truly nerve-racking experience of grotesque monsters, quick reactions and resource management. The worst part is that there’s no pause screen, so you can’t get a breather from the terror inducing tension. 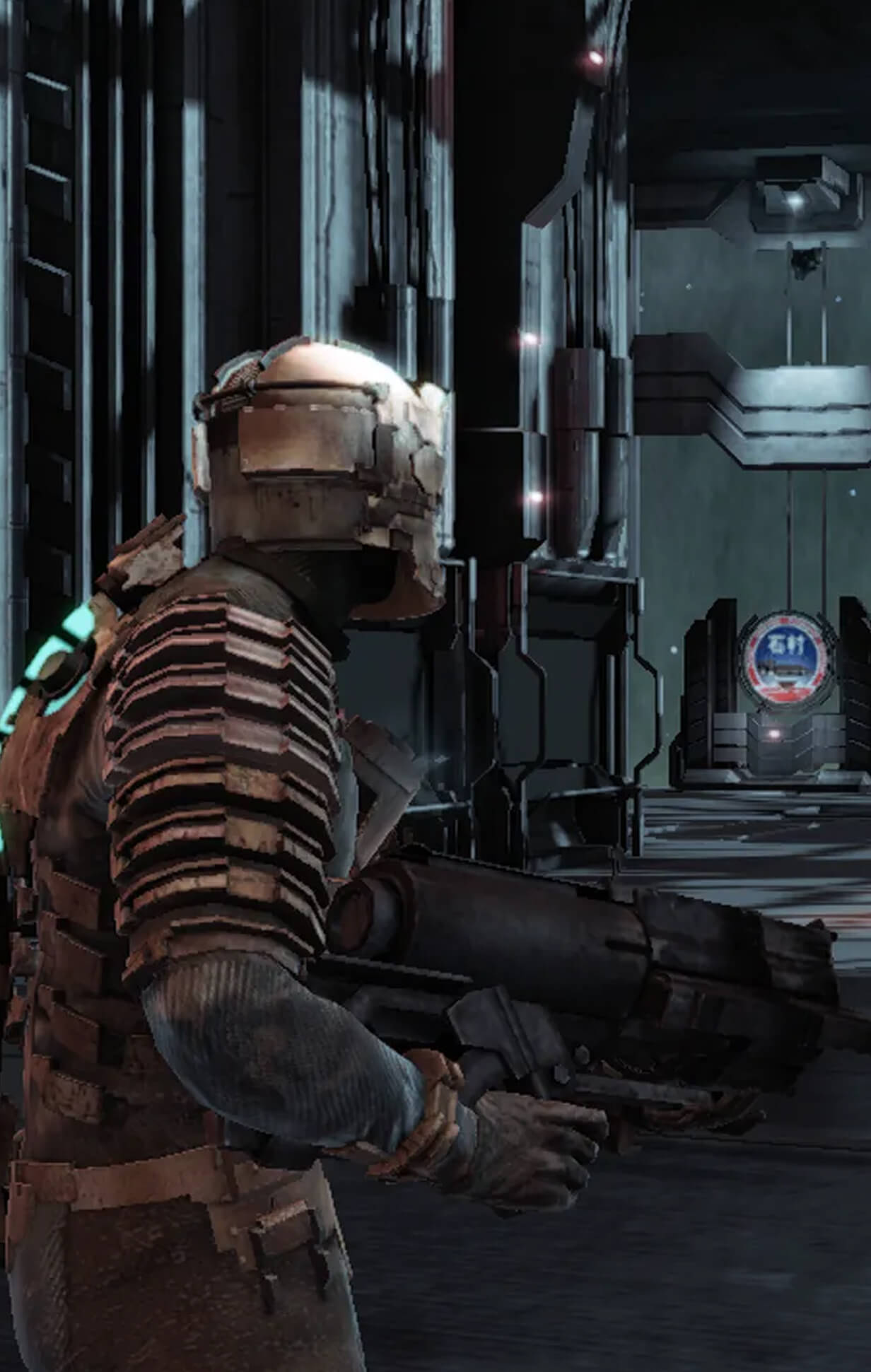 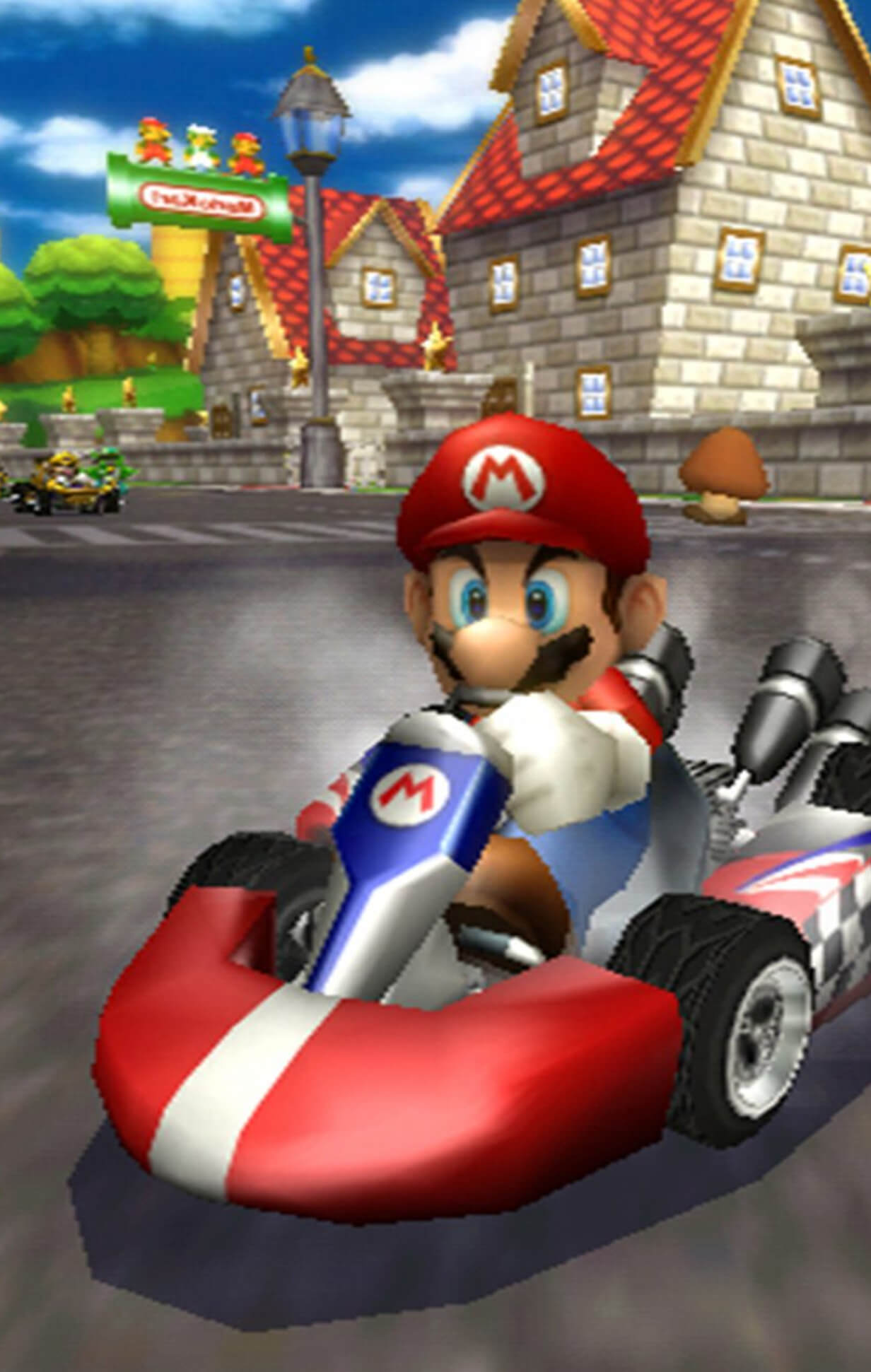 The sixth instalment in the Mario Kart series, Nintendo brought us the addictive Mario Kart Wii, with more control over your favourite characters than ever.

With twenty-four playable characters from the Mario franchise, it was the largest roster that had ever been offered. In addition to these characters, you were also able to select your own personalised Mii characters, to race against the likes of Mario, Luigi, Donkey Kong and many more. Using the Wii Wheel, Wii Remote and Nunchuk, classic controller or GameCube controller, Nintendo covered many different control options.

Moving away from the approach of its predecessor, Mario Kart: Double Dash!!, the franchise returned to single driver gameplay. Across the thirty-two tracks there were thirty-six vehicles, including karts and bikes, each with different handling abilities. Sixteen of the tracks were retro, ported from those found on the SNES, N64 and DS, such as Ghost Valley 2, Sherbet Land, and Desert Hills. The other sixteen tracks were brand new nitro content, such as Moonview Highway, DK Summit and Rainbow Road. The thirty-two tracks were spread over eight cups, each harder than the next. For the Battle mode, which encompassed Balloon Battle and Coin Runners, there were five new stages and five retro. To hone your skills, you can compete against a ghost, which mimics your own movements from an earlier race, as you attempt to improve on your time.

Of the Grand Prix, Time Trials, Versus, and Battle single player modes, the local multiplayer supported both Versus, and Battle, for up to four players. Later, up to twelve participants could compete, via their online play. As you complete with players all over the world, you can compare the high scores, even competing against the development staff that made the game possible. However, don’t expect to beat them! Using a variety of weapons, acquired as you move through each section of the track, you aim to trip up friends, family and the tricky AI racers all around you. Strategically place bananas around every corner for them to slip on, fire a green shell behind you for the oncoming pack or fight your way from the back with the devastating Bullet Bill. However, don’t think life is rosy up front, as the spiny shell looms over you, waiting to explode, just as you reach that finish line. Its new trick mode system allows you to gain speed boosts as you aim to beat your opponent to the nearest power-ups, or use their slipstream to effortlessly glide past them.

Whether you’re a fan or not, it doesn’t matter. Simply, Mario Kart Wii is a whole lot of fun, building on the superb DS version, providing something for everyone.

Formed by numerous former employees of other high profile UK games development studios, Media Molecule set out LittleBigPlanet as their first game securing funding from Sony to create the game exclusively for the PlayStation 3.

The game stars Sackboy, a personalised character you can tailor to your choosing for your adventures in LittleBigPlanet. The game is a 2D side scroller, inspired by the likes of the original Mario Brothers games, with a design aesthetic made from craft supplies and real world objects.

In the story mode, LittleBigPlanet is set in a world of creations made by Creator Curators. One of the Curators goes rogue and starts stealing other creators creations and not sharing them with the world. Sackboy must travel LittleBigPlanet to free all of the creations for the world to use.

Along with the story levels built by Media Molecule, LittleBigPlanet also featured a level creation suite to build your very own intricate levels to share with other people through the PlayStation Network, making the game practically limitless.

My own attempts to make levels always fell flat, but experiencing an unlimited amount of imagination from around the world was always interesting as creators experimented with level design.

The sound design was phenomenal, featuring a mix of eclectic music tracks.

The series lives on with the latest version LittleBigPlanet 3 on PlayStation 4. 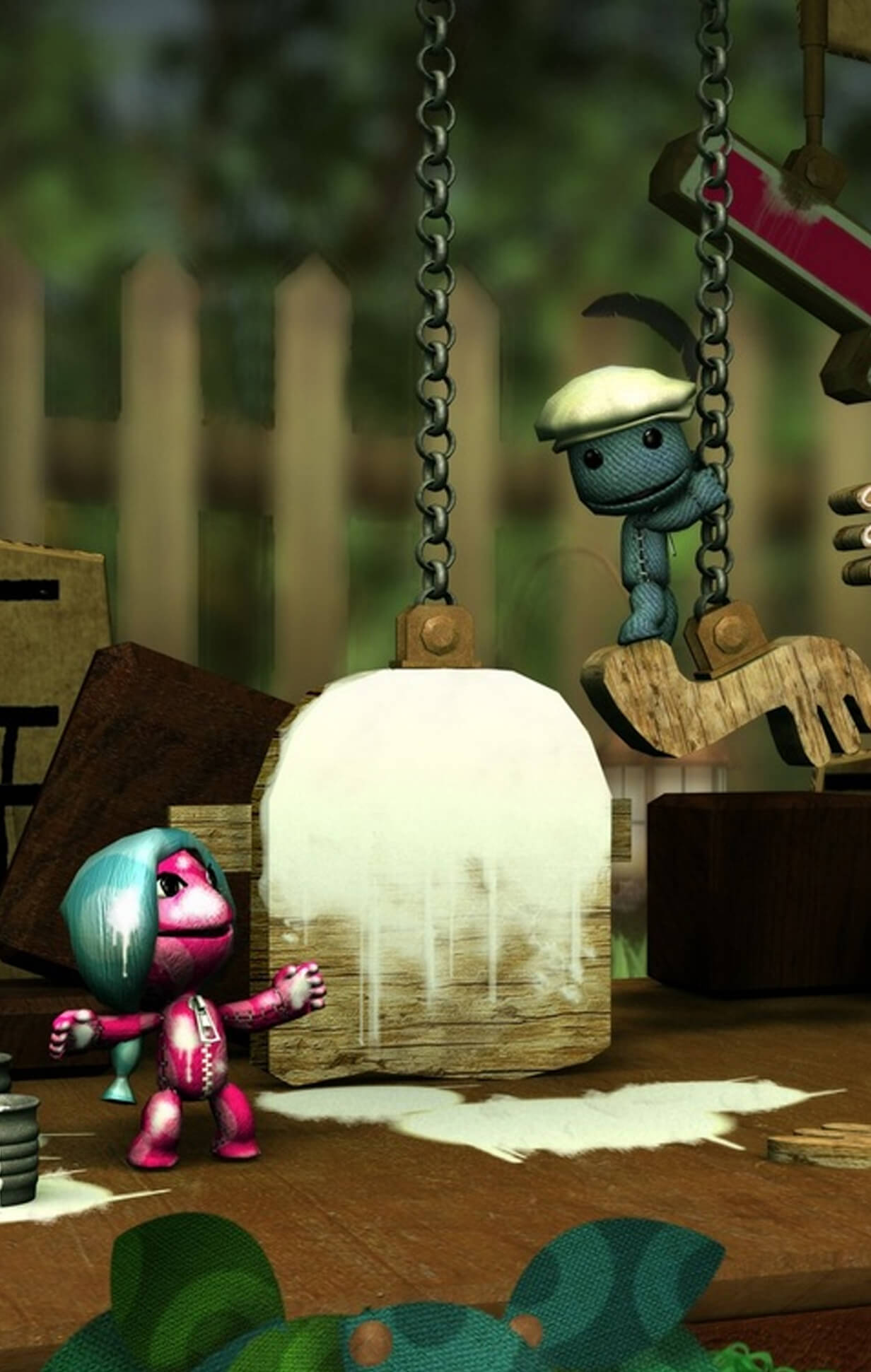 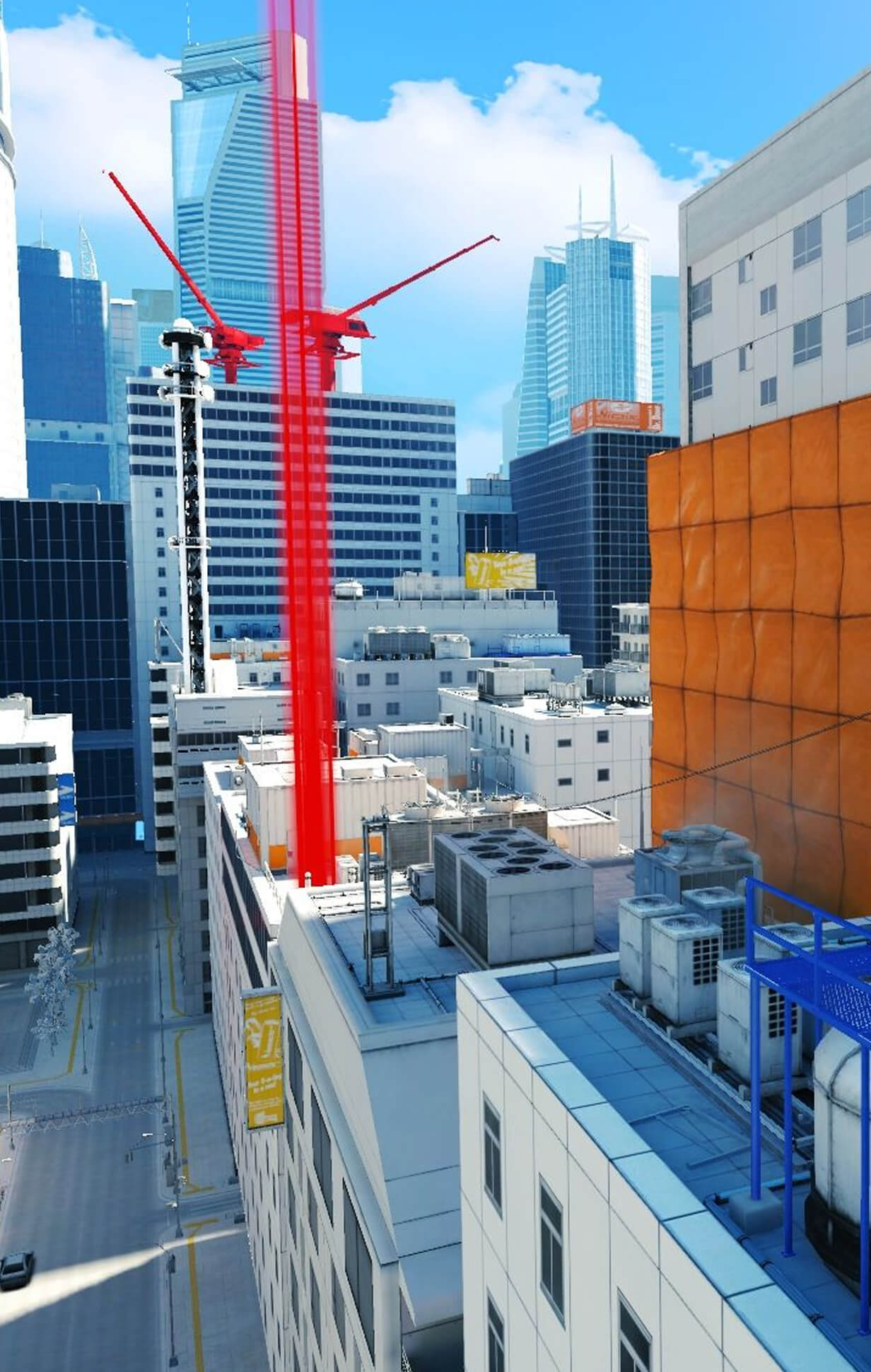 DICE, the developers of the Battlefield series turned first person shooter conventions on its head with parkour inspired Mirror’s Edge.

You play the role of Faith, a ‘runner’ who couriers physical communiques around a totalitarian city for groups who avoid communicating through monitored telecommunications. After completing a run, she learns that her sister police officer Kate is in trouble at Mayoral candidate Robert Pope’s office. She finds Kate next to Pope’s body and insists that she’s been framed, requesting for Faith to discover the cause. She discovers a note in Pope’s hand with the word Icarus on it.

Faith learns of ‘Project Icarus’, a program designed by the regime to train their forces in parkour to eliminate all of the runners, crushing revolutionary groups. Throughout the story it’s revealed that several friends of Faith are colluding with Project Icarus, warning Faith to comply.

Kate is captured and convicted of Pope’s murder, whilst Faith’s mentor is killed by another turncoat, and taken to the Mayor Callaghan’s office in the ‘Shard’ a tall sky scraper. Conveniently, the Shard also houses the city’s surveillance systems. Faith breaks into the building, destroying the servers and saving Kate in the process.

As you could probably tell by the blurb, this is a really short game, you’re lucky to get 4 hours out of it. However, this allowed the developers to truly polish their vision of this first person parkour game. The sterile white city contrasts with the bright colour hues throughout the game with brilliant lighting to set the mood of this stylised dystopian city, with a brilliant soundtrack by Swedish electronic musician Solar Fields.