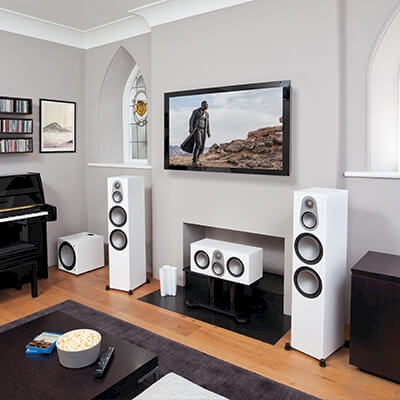 A new visual character in the Silver Series.

Ground breaking design changes and extensive engineering research has led to a completely revised Silver Series of loudspeakers from Monitor Audio which now caters for all two-channel hi-fi and surround applications. 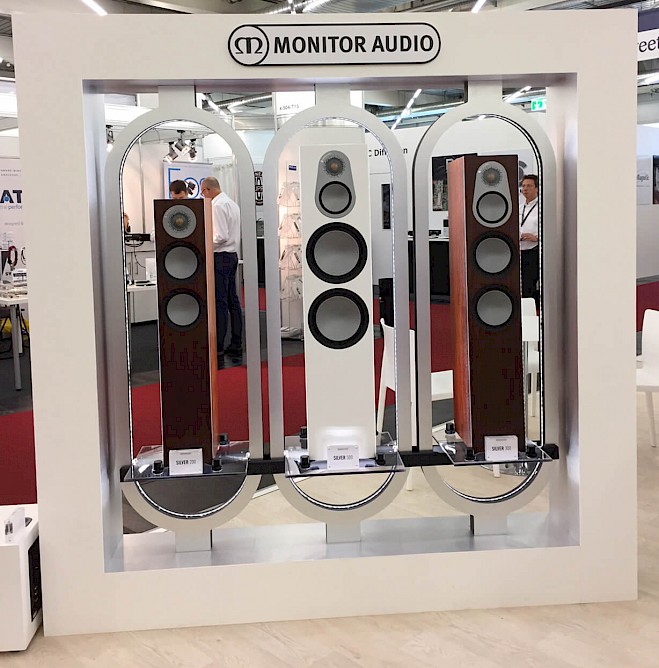 Launched at the Munich High End event, the nine model range has been created with contemporary living very much in mind. Two compact stand-mount options and a choice of three slimline floorstanders take up the minimum of space yet produce a big sound, while the Silver FX wall-mount and two centre channel speakers are perfect for discreet AV installations. The Silver Series is completed with a powered subwoofer, featuring on board DSP for resounding bass down to a staggering 22 Hz. Magnetic grille fixings on all models ensure an elegant baffle aided by rear mounting of the proprietary HiVe II ports.

The two Silver Series’ stand mounts are small speakers that produce a big sound, with impressive scale and dynamics thanks to powerful drive unit magnets and large, 32 mm voice coils which generate a tight, punchy bass. The ultra compact Silver 50 is a two-way bass-reflex featuring a new 51/4” bass/mid-range unit and new 25 mm Gold Dome C-CAM tweeter to become the most diminutive bookshelf model ever in the long running Silver Series.

Its larger sibling, the Silver 100, combines the same tweeter with a massively powerful 8” C-CAM mid/bass driver, shoehorned into the compact two-way ported design. Large drive units can move air, so the Silver 100 is capable of incredible dynamic headroom and bass extension usually reserved for floorstanders.

The hybrid Silver 200 is acoustically and electrically a two-and-a-half-way dual chamber reflex design. It boasts twin high efficiency HiVe II ports as well as two 51/4” C-CAM drive units (handling bass and bass/mid frequencies) alongside the new 25 mm Gold Dome tweeter. Visually sleek and slender, the Silver 200 is a truly compact floorstander with lifestyle proportions. Differential tuning ensures that only the mid-range crosses over with the tweeter for precise and consistent imaging both on and off-axis. The advantages of this configuration include performance approaching that of a more complex three-way yet ensuring higher efficiency and extended bass notes from the space-saving enclosure.

The first of two fully fledged three-ways in the line-up, the Silver 300 has built on the award-winning credentials of its predecessor but with crucial drive unit improvements for an enhanced sound quality. Listeners can be assured of class-leading mid-range delivered by a dedicated 4” driver featuring Monitor Audio’s ingenious ‘under hung’ voice coil and motor system for incredibly low distortion because the coil is always in the magnetic gap. A pair of long-throw bass drivers work in tandem to generate a seismic low-frequency extension. The slimline cabinet can be placed just a foot from the wall yet yield an extremely satisfying sound. Given its high sensitivity, the Silver 300 can be coupled with even modest amplifiers to reveal room-filling dynamics of music or film soundtracks even in larger settings.

Top of the Silver genre is the Silver 500 with a pair of powerful, long-throw 8” C-CAM bass drivers for a punchy, full-scale bottom end down to an earth-shattering 30 Hz, negating the need for a separate subwoofer. Undistorted mid-range is projected by a dedicated 4” RST driver created especially for the task.

Silver FX is a discreet profile, angled baffle speaker intended to be flush mounted on side or rear walls where it blends unobtrusively with any interior. Its dispersion characteristics can easily be changed via a switch, offering dipole or bipole directivity in multi-channel systems. Dual 25 mm Gold Dome C-CAM tweeters, featuring vented Neo magnet systems for minimum distortion and crystal clear highs, are combined with a Monitor Audio 6” C-CAM mid/bass driver. Far from being considered an ‘ancillary’ speaker, the development teams have created a high spec model with the latest technology for ultimate enjoyment.

A choice of two centre-channel speakers is offered in this new line-up: the Silver C150 and, larger, Silver C350 to deliver articulate dialogue and crisp dynamics to movies. The first is a compact design with twin 51/4” C-CAM bass drivers in a familiar three-driver configuration alongside the 25 mm Gold Dome tweeter in a two-and-a-half-way sealed system. Its skilful interpretation works well close to wall and in confined spaces, while promising elimination of the central ‘dead spot’ issue found with typical mid-tweeter arrangements. It is ideally partnered with the Silver 50 and Silver 200 models for excellent and consistent results.

The larger Silver C350 builds on the engineering prowess of its smaller sibling and will find favour where sonic performance is the most critical factor in a home theatre. This three-way, four-driver configuration is the ideal partner for the high performing Silver 100, Silver 300 and Silver 500 models where its vertical orientation of the mid and tweeter axis ensures the same directivity across the entire installation.

Since up to sixty per cent of the total sound in an AV system can be delivered through the centre channel, Monitor Audio has deliberately created top specification products with high efficiency and minimised distortion to achieve the most accurate performance possible.

Thunderous bass is assured from the Silver W-12 powered subwoofer thanks to its long-throw 12” drive unit and over specified driver assembly which has a hugely powerful magnet system and massive voice coil to deliver immense power from a compact, sealed cabinet.

An inbuilt 500 W Class-D amplifier provides incredible headroom while powerful on board DSP is employed to deliver filtering alongside the Monitor Audio APC (Automatic Position Correction) system that routinely detects and eliminates detrimental room acoustics. To prevent distortion and the possibility of the unit being over driven, a sophisticated 32-bit micro-controller at the heart of the subwoofer takes measurements thousands of times per second, so you can sit back and enjoy deeply powerful yet clean bass, even from the most explosive sounds.